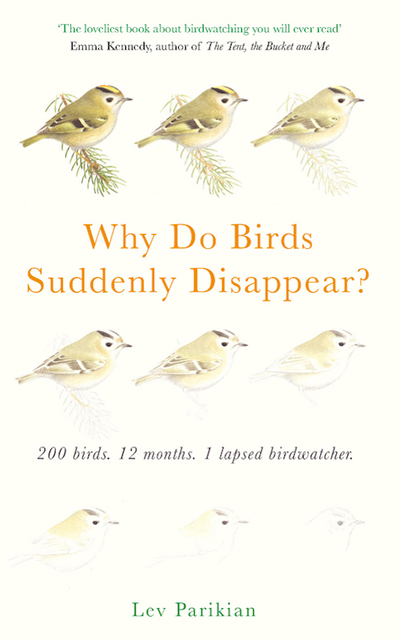 Biography | Nature
You made Why Do Birds Suddenly Disappear? a reality. It's available in all good book stores now.
$7
71 pledges

Early bird offer! A signed copy of the hardback first edition plus the ebook and your name in the back of the book
Only 50 available
$50  + shipping
23 pledges

Lev will send you a chatty postcard from one of the flagship birdwatching sites visited in the book, plus a signed copy of the hardback first edition, and the ebook
$65  + shipping
1 pledge

Attend one of Lev’s conducting masterclasses as an observer, a signed copy of hardback edition plus the ebook
$75  + shipping
15 pledges

Lev will write a limerick or clerihew about your favourite bird in a signed copy of the hardback first edition, plus the ebook
$100  + shipping
6 pledges

Signed print of the cover art, a signed copy of the hardback first edition, plus the ebook
$125  + shipping
16 pledges

A place on one of Lev’s conducting masterclasses, in which you will conduct an orchestra in a 20-minute lesson and observe other conductors. Repertoire to be decided between you and Lev. You will receive a written report after the masterclass. Plus a signed copy of the hardback first edition, and the ebook.
$220  + shipping
8 pledges

A day birdwatching with Lev at a birding venue in the South of England, guided by an expert birdwatcher who will lead the tour and help with identification and general advice. Plus a signed copy of the hardback first edition, and the ebook.
Only 8 available
$250  + shipping
3 pledges

An individual conducting lesson with Lev in which you will explore general and specific techniques and philosophies of conducting with particular reference to a piece of your choice. Plus a signed copy of the hardback first edition, and the ebook
$375  + shipping
3 pledges

Lev will come to your music society or club (or other interested group of people) and give a talk on ‘Birds in Music’, illustrated with slides and audio samples, with Q&A afterwards. Plus a signed copy of the hardback first edition, and the ebook.

As a 12-year-old, I was an avid birdwatcher. I was also a fraud, a liar and a cheat. Those lists of birds seen, ticked off like Don Juan’s conquests? A tissue of lies. One hundred and thirty species? More like 60. Dotterel, firecrest, smew? Give me a break.

So when I revived my dormant mania early this year, I decided to right my childhood wrongs, even though they were born of good intentions. I would go birdwatching again. I would keep track of the birds I saw. I would not lie. To spice things up, and to guard against enthusiasm fatigue, I set myself a target. Six hundred and one bird species have been recorded in Britain. I would aim to see 200 of them in a year. A doddle, surely?

Not so fast, man-cub.

Half of the 601 are described as ‘rare’. One, the great auk, is extinct. That leaves 300. My friend Andrew is a proper and active birder. In his best year he clocked up 206. I’m neither proper nor active. What chance do I have? Slim to none. But I like a challenge.

Why Do Birds Suddenly Disappear? is the story of that challenge. But it’s not just about birds. It’s about family, music, nostalgia; hearing the stories of strangers; the nature of obsession and obsession with nature. It’s about finding adventure in life when you twig it’s shorter than you thought; losing and regaining contact with the sights, sounds and smells of the natural world; the humiliation of being a professional musician who doesn’t recognise the song of a blue tit. It’s about the first time my parents heard me say ‘fuck’.

It’s a book for anyone who has ever seen a small brown bird and wondered what it was, or tried to make sense of a world in which we can ask ‘What's that bird?’ and ‘What's for lunch?’ and get the same answer. It’s also a long overdue thank you letter to my parents.