Watch the Birdie ... after doing bird

Yesterday I travelled to oh-so-trendy Shoreditch in East London to be one of the speakers at Birdie, a photography conference for the passionate snapper. This was an event aimed at both professional and amateur and the speakers covered a wide range of subjects and approaches. It was a really great day; very relaxed, very informative, very casual. 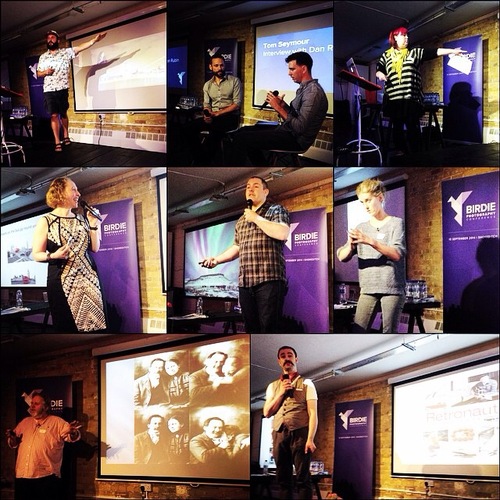 You can find out more about the speakers and what they do by checking out the Birdie site here.

One of the best things about the day was chatting to the people who'd come along. I met some really interesting and gifted hobby photographers (who, bizarrely, all seemed to be web developers) and saw so many great photos. And I also met Tom Elkins, who is CEO of a chariry called Photovoice. Photovoice's aim is to give marginalised groups and communities a voice through photography; it's a way for them to present their 'case' to the world, letting you see their world as they see it. It's a very worthy thing and I've told them that I'd like to get involved in some way.

A typical UK project is something like Shutter Release - Picturing Life After Prison which ran between 2012-13. The aims of this particular initiative were to reduce re-offending rates for prisoners, to raise awareness of the barriers and anxieties faced by prisoners upon release from prison, and to create a model of good practice and an evidence base to support the wider use of photography as a tool to tackle issues around release and rehabilitation.

In November 2012 PhotoVoice delivered a course of eight full-day workshops with a group of prisoners approaching release, consisting of technical photography skills, visual literacy and storytelling through images, and group discussion of issues involved in preparing for, and dealing successfully with release from prison. The prisoners were given day release to take part in the project over the two weeks of workshops. The course included a visit from an ex-offender working as a mentor with the St Giles Trust, who gave a talk to the prisoners about his experience breaking the cycle of re-offending after his last prison term, and finding work after over 40 years of never having been employed.

Through the course, the participants were supported to consider what challenges they would be facing upon release – both those that would generally affect anyone coming out of prison and also those specific to their situation. They built up personal scrapbooks with photos they had taken, photos they had found and evaluated from newspapers, magazines and books provided as visual stimulus, and notes on their personal milestones after release and how they would reach them. These scrapbooks were invaluable since the prisoners were not allowed to take their cameras back into the cells, but could take their scrapbooks to reflect on photos they had taken and continue work storyboarding their personal journey photo stories.

All the participants succeeded in creating a captioned photo story specific to their situation, conveying what they wanted to explore and encourage others in similar situations to consider. Issues explored included finding employment, facing family and friends, and money troubles. Their work also highlights some issues that those with no experience of prison may not be aware – for example the costs incurred by prisoners in order to maintain a balanced diet and personal hygiene, leading to a draining of resources while they are not earning. The photos on this page are screengrabs from a book produced on the make your own book site Blurb which captures the work of the prisoners.

The project is being externally evaluated by Professor Del Loewenthal of the University of Roehampton, an expert in the use of photo therapy techniques in prisons. The reults aren't in yet, but it is looking as if it was very successful, which may springboard similar new projects.

What a brilliant way of helping people, regardless of levels of literacy or language skills, to help themselves.

The range of Photovoice projects is wide and fascinating and not just constrained to the UK. Do have a look.

You can visit Photovoice's site here.