While it is packed to the gunwales with stacks of problem-solving goodness, Why did the policeman cross the road? is also, partly, a memoir. In order to tell the story of my work with the Problem Solving Unit at Scotland Yard, it was necessary to give the reader some back story. And prompted by watching an old movie at the weekend, I thought that today I'd give you a small excerpt from the biographical content of the book.

The movie was The Alphabet Murder, a 1965 Whodunnit? starring a horribly mis-cast Tony Randall as Hercule Poirot. However, it does boast a stellar cast of great British character actors such as Robert Morley, David Lodge, Maurice Denham, Windsor Davies and Richard Wattis. And it has a delicious cameo by Margaret Rutherford and Stringer Davis in their only appearances, in character, outside of the four well-known and much-beloved Miss Marple series of films.

What prompted me to write this shedpost is that Rutherford's cameo happens on the steps of the old Uxbridge Police Station - the very first nick I worked at as an 18 year old fresh-out-of-the-box cop (see video attached).

Here's how I describe my first impressions in Chapter 1 of Why did the policeman cross the road?

'Uxbridge Police Station was not what I expected.

I’d expected my first station in the ‘big city’ to be something slabby, concrete and Brutalist. But Uxbridge nick was actually rather charming; blonde-bricked and arch-windowed with decorative keystones, cast iron railings, hanging baskets and window boxes. Sandwiched between an old-fashioned book shop and a new-fangled video shop in Windsor Street, it was hard to imagine that this friendly looking Victorian building was the seat of local law enforcement. It looked more like a location from a Boulting Brothers comedy and I chuckled at the thought that a uniformed Jimmy Edwards wouldn’t have looked out of place coming out of the front door and mounting his black bicycle.

Which is why, when an officer with a handlebar moustache like two freeze-dried ferrets emerged from the station puffing on a pipe and clutching a copy of The Racing Post, I was somewhat taken aback. That he was immediately followed out by another older officer with huge white muttonchops, loudly tum-ti-tumming the theme tune to The Archers, just added to the surreality of it all. Surely Terry-Thomas couldn’t be far behind them?

Thankfully, inside the station, the officers were a little less Ealing Comedy in appearance and the Reserve Officer – the person who manned the telephones and radio (no computers back then of course) - was definitely under 30. This suggested that maybe I hadn’t been accidentally seconded to a police retirement home after all.'

When I wrote those words back in April, I had no idea that the station had actually appeared in an Ealing Studios-era comedy. I have therefore been delighted to add a footnote to that effect to the chapter.

The old Uxbridge nick in Windsor Street was one of London's oldest police stations when I arrived there in 1980 and soon proved to be hopelessly inadequate for the changes in policing that were coming, most notably IT. It therefore shut in 1988 and was replaced by a larger and much more modern building near the courthouse. A plaque on the old station marks its passing. 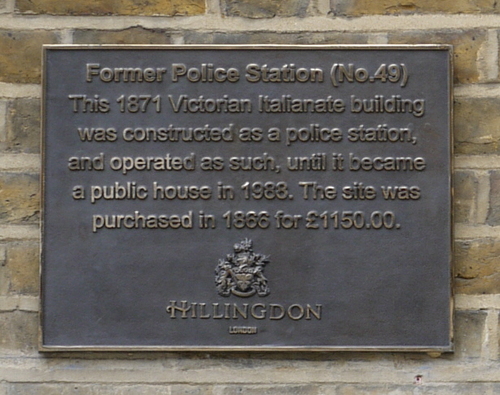 The building is now a pub called the Fig Tree. But nice to see that the 'old-fashioned bookshop' I mention is still there. Tommy Barnard was the owner back in my day and his knowledge was encyclopaedic. Lovely man. 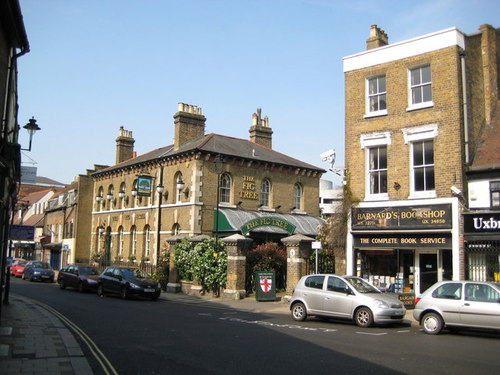 The building has retained most of its original eternal features, although the outside toilet block in the rear yard is now a much more tasteful conservatory-style extension.

I think Miss Marple would approve.