Guerrila knitters are wanted to knit cosies for city trees.

It may sound like a barking idea but Christine Fraser of Exeter Parks Watch believes it could save Exeter trees from attacks by dogs.Last summer there was a spate of trees being attacked in St Bartholomew’s Cemetery and several had to be felled as a result, and now attacks have been reported in Bury Meadow Park. 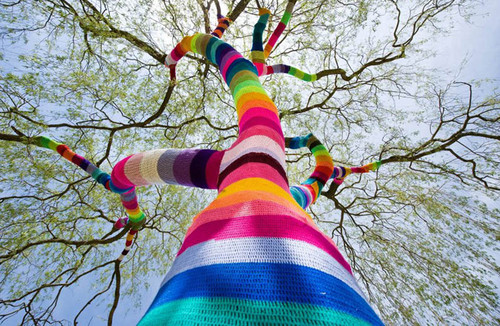 Ms Fraser said: “Men with pitbull-type dogs/Stafford terrier type dogs are going into the parks and using lures up against the tree trunks making the dogs frenzied so that they scratch and rip the bark off the trees. We have to be creative in how we protect the trees as we can’t have a police officer guarding every one. If we yarn bombed the trees it would protect the trunks and would do it in an attractive way.”

The plan has the backing of the city council. Keith Owen, Exeter’s lead councillor for environment, health and wellbeing, said: “I deplore the damage being done to the trees by these dogs and the attitude of their owners who encourage it. I support this initiative by Exeter Parks Watch who do such excellent work for our city.” 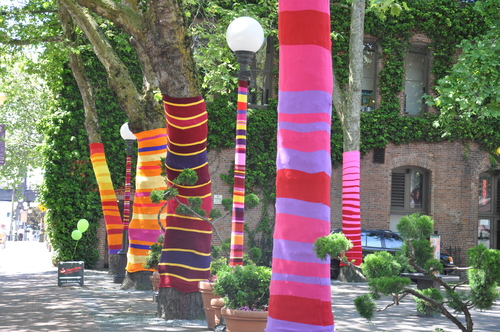 If you would like to be involved in knitting tree cosies please attend the Mulberry Cafe in Exeter Community Centre, St David’s Hill at 2.15pm on Friday, September 12.

If you want to know more about the phenomenon of dogs attacking trees, see: http://www.theguardian.com/world/2009/aug/11/urban-trees-destroyed-fighting-dogs