The Solution that Solves Nothing

This is an unusually long shedpost. It's a researched piece on homelessness that I've reluctantly cut from the book due to length and the fact that I have better, more powerful examples to use. But I thought I'd include it here to give a sense of the book's style. Plus, it's an good example of what happens when people apply the wrong solution to a problem. Enjoy.

Please note that not all of the facts may now be current as this extract was written back in 2008; I've been writing this book for over eight years and, unlike the material that will be in final edit, I haven't updated this story.

Toney Sleiman will tell you that he got his street smarts and business acumen from his late father, Eli, whom he calls, ‘The only teacher I ever needed’. Eli Sleiman was a Lebanese immigrant who came to America in 1950 with nothing, not even a language he could use. He spoke Arabic and French but no English and, being outside of the education system, he had to learn the hard way by trial and error or by consulting a French-English dictionary. Toney often tells the story of how his father would pick up new words and phrases as he worked in a relative’s grocery store with his American wife Josephine: ‘One day, a customer asked for frankfurters. Dad asked Mom to translate. Now he knew another word for sausage. The next day, a customer asked for wieners and Dad again asked what this word meant and Mom told him. On the third day, a customer asked for hot dogs. When Mom pointed to the same sausages, Dad threw down his dictionary in frustration. ‘I'm going home,’ he declared. ‘This language is too complicated.’[1]

But Eli Sleiman stayed and got to grips with the language. At the same time, he invested every dollar he could spare into buying his own grocery store. And, as time went on, he expanded both his vocabulary and his business portfolio ever further, eventually creating one of the largest independent retail and construction companies in Florida, USA. That company is now run by Toney and his three brothers. In recent years, the Sleimans were major players in the redevelopment of the Jacksonville Beach area and the company has developed, owns and manages more than 120 properties. Eli Sleiman died in 2000, a very rich and successful man. He and his children embody the American dream.

Known locally as ‘the strip mall king’, Toney Sleiman has a reputation as a tough guy in business. Tony McCormack, a local PR expert from Jacksonville, says that, ‘(Toney) never has less than 30 to 50 projects going at one time. He gets from one to the other by removing clutter or the removal of anything from the outside that might hinder getting the job done.’ One of Sleiman’s assets is The Jacksonville Landing, a horseshoe-shaped, two-level, glass and steel waterfront complex on the north bank of the St Johns River. It comprises shops, bars, restaurants and entertainment venues and hosts more than 300 events a year. Sleiman paid $5.1 million to lease it for 53 years from the Rouse company. 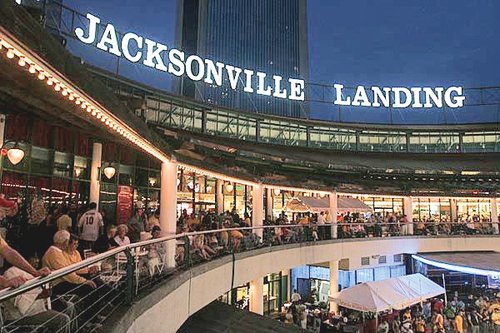 In February 2008, Sleiman decided to refurbish the benches from a gazebo at The Landing and had them removed. And it was while the area was bench-free that Sleiman noted something else was missing: the homeless. The area regularly attracts rough sleepers as it is well lit, reasonably crime-free and there are plenty of fast food outlets nearby. Sleiman therefore came to the not unreasonable conclusion that, by removing the benches that they probably slept on, he’d forced the homeless to move on elsewhere. Sleiman believed that the sight of these people detracted from the area and scared his customers. Consequently, he did not put the benches back, insisting that the area would be safer. He believed that he was doing a public service. And Toney Sleiman is a man who loves his city and its people.

This idea for solving the homeless ‘problem’ soon caught on and the City Council removed many more benches, especially from the Northbank Riverwalk and from under the historic Acosta Bridge; a park area favoured by rough-sleepers. Meanwhile, local traders jumped onto the bandwagon, lobbying to block the installation of drinking fountains and public toilets (or charging for their use) in order to prevent their use by the homeless and thus dissuade them from congregating downtown. By removing or limiting the availability of public amenities the business community believed that it had found a solution to the local homeless problem. 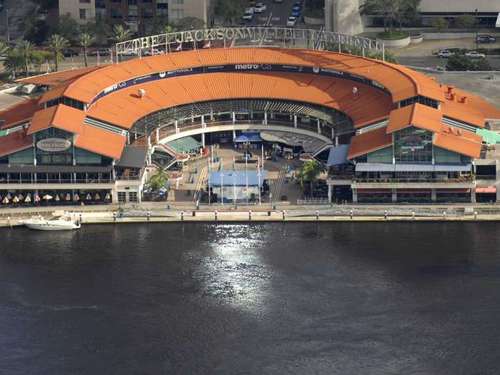 However, the removal of the public benches was met with an immediate and unexpected backlash. Jacksonville residents complained that by removing the benches, the City had fixed it so that no one could sit down, something that particularly affected the elderly, the disabled, the physically unfit and parents with young children. It seemed that everyone was being punished for the actions of a very few, they said. Meanwhile, the proposed solutions for keeping the homeless away from the area were, paradoxically, encouraging them in. By restricting public access to fresh drinking water, the business community had forced the homeless to use shops, bars and restaurants instead. The same applied to toilets. To top it all, there was also a certain amount of public sympathy for the plight of the homeless, especially when it was discovered that some of them were military veterans. Diane Gilbert, executive director of Emergency Services and Homeless Coalition of Jacksonville, Inc., explained to the Florida Times-Union newspaper that she believed there to be some 17,000 homeless people in Jacksonville (The total for the entire state of Florida was somewhere around 68,000). ‘Inflation has boosted food prices and made it tougher for people. We're getting lots of calls from mothers with little kids who are about to be evicted because they can't pay the rent’, she explained. ‘The increase in requests for food help have been dramatic.’[2]

Paul Crawford, deputy director of the Jacksonville Economic Development Commission, wondered whether there actually was a problem to be solved. ‘There's a perception that the benches attract the homeless’, he said, ‘but there's no way to know if that's true if it's not clear how many people, and who, use the benches regularly.’ He therefore proposed that a study be carried out to find the answer.  Meanwhile, Assistant Police Chief J R Ross, who oversees the area, said that he didn’t think the benches needed removing at all. His officers routinely patrol the Riverwalk, urging anyone acting inappropriately to move along and arresting them if they commit misdemeanours. He encouraged the City to put out benches with arm-rests in the middle to deter rough sleepers. That way, the public wouldn’t be inconvenienced at all.

As for the homeless themselves, they were quick to point out that, just because they had no permanent address, they were not necessarily a ‘problem’. Husband and wife Coree and Angela Toney moved to the city from Alabama to help Angela’s mother deal with her aggressive cancer. Having used up their savings and unable to find work, they ended up sleeping rough under the Acosta Bridge. ‘We stay in this area because it’s safe,’ explained Angela. ‘We don’t want to live like this but there aren’t enough shelters. We don’t mess with people. We do the best we can to help others. People end up like us for all kinds of reasons. Not everyone who is homeless is a roach.’ Coree chips in: ‘I’m a sous-chef. I’d like my own restaurant one day. Just ‘cos I can’t get work right now people treat us like dirt. That ain’t right. We just want to be treated equal. Fairly, like other people.’ [3] 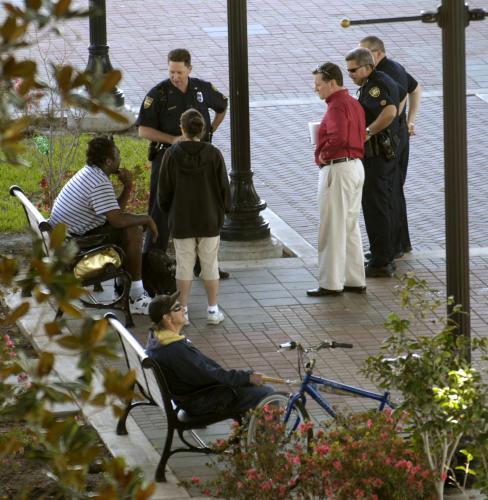 City Councilman Bill Bishop had heard enough. ‘The homeless aren’t going to care’, he said. ‘They’re going to camp in the bushes if there aren’t benches. If homeless people sleeping on the Riverwalk is a problem, the city should beef up police patrols, not remove amenities used by the general public’. The benches were put back.

Toney Sleiman would like there to be no homeless people near the Jacksonville Landing. But, as one 50 year old homeless man pointed out when interviewed, it was unlikely that he would leave the area as there were so many places downtown where he can eat. Coree and Angela have nowhere else to go and will therefore stay in the area - benches or no benches – until their situation improves. And even if these people did move on, there will always be more homeless people to fill the places they leave behind. As Garry B Coston of Fresh Start – a social services agency - explains: ‘There are underlying root problems that cause homelessness such as drug and alcohol use and abuse, prostitution, dead-beat dads, disabilities (mostly ex-servicemen), sexual deviants and offenders, mental illnesses, chronic or even acute financial problems, and there are some people who become homeless simply because they didn't know what to do in a certain situation and didn't know where to turn. The solution is to address the problems that cause homelessness.’[4] 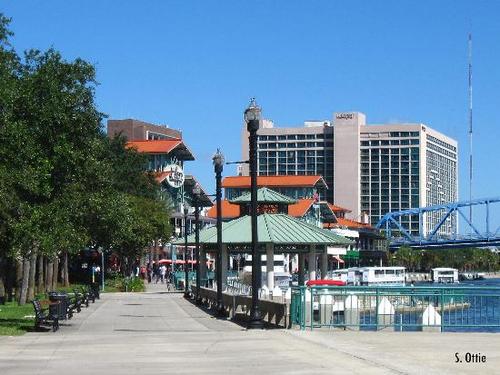 In telling this story, it's not my intention to paint Toney Sleiman as a bad guy. He's not a villain. He isn't cruel. He is first and foremost a businessman but he’s also a philanthropist and a genuinely good man. He throws a lot of money into city improvements and into creating jobs. Local AmSouth bank president Marty Lanahan is keen to point out that, ‘Most of the residents of Jacksonville see the business side of Toney Sleiman. What they don't see is his incredible care and concern for his community and his family. He is generous with his time and his energy and is passionate about improving our city.’ However, Toney Sleiman is just one of thousands of property owners across the USA who believe that 'something needs to be done about the homeless problem' and that the solution is to simply move it on. It's a 'solution' based on stereotyping and misinformation and it won't work. It never works. And yet, at the time of writing, he is thinking about removing the benches again. ‘The city won't be able to easily recover from the bad publicity if someone is injured by one of the Riverwalk's homeless’, he says. ‘If the city wants to throw me in jail, so be it.’

Meanwhile, Jacksonville is looking at buying in redesigned benches that 'discourage rough sleeping'. It won't. It will discourage rough sleeping on benches but homeless people still will need somewhere to sleep. The benches won't prevent people from becoming homeless or help those that already are. Nor will they stop homeless people from hanging around the city. But it will make it look as if the city is doing something. It would be a wonderful world if rich philanthropists like Toney Sleiman invested their energies and money in finding pathways to get people off the street and into affordable housing and employment. He'd be seen as a saint; he'd be helping to actually rid his city of homeless people - but not by simply pushing them somewhere else. If the homeless aren't homeless any more, everyone wins. And all it takes is a little compassion and generosity. As Mother Teresa of Calcutta once pointed out, ‘We think sometimes that poverty is only being hungry, naked and homeless. The poverty of being unwanted, unloved and uncared for is the greatest poverty. We must start in our own homes to remedy this kind of poverty’.