The Case of the Creeping Fox Terrier Clone

A couple of posts back I talked about the importance of verifying data and periodically checking (monitoring) to see if data is still current. Craig Lewis then posted this reply (I'll put it here to save you hunting for it):

After a swift double-take I checked the reference and realised it was an earlier publication by the same group. Seven self-referrals later I arrived at one original piece of that had been folded into a larger publication by this group. After checking the notes I realised we were dealing with a sample size of under 30 for that report, and it's not unreasonable that just one cheeky kiddie would have thrown that in as a joke.

The problem is that the website named sounded quite similar to a massive video sharing site that IS popular with children and nobody thought to check it over the six years between the first and last reports where it was mentioned. This particular group appear to make themselves seem more prolific by rehashing their own reports, so they'd created a number of sources all with this rogue reference and the claim that all children across Europe used the site regularly!'

The story reminded me of chunk of text that, sadly, I had to remove from Why did the policeman cross the road?' as it interrupted the flow of the chapter. But at least it can enjoy a second life here in the shed. :)

The late biologist and science writer, Professor Stephen Jay Gould once wrote an essay called The Case of the Creeping Fox Terrier Clone in which he talked about one of the biggest pitfalls of research – accepting a fact as truth without checking the source and then passing it on in its inaccurate state.  It all began with an animal called Hyracotherium (or Eohippus as it was called in older textbooks), an early ancestor of the horse. Physically, it looked quite like a horse, except that it had three toes per foot instead of hooves, and was considerably smaller; about the size of a Fox Terrier in fact. It was commonly used to illustrate the theory of evolution, usually accompanied by a depiction of the gradual changes in horses from Hyracotherium to modern Equus by way of larger and larger intermediate species.

This in itself was misleading as it suggested that the horse passed through all of those different forms in a linear progression. The truth is that each species would diversify into a range of new species and maybe one or two of those would survive to evolve again. The evolution of the horse actually looks more like a tree with a lot of dead branches than a single continuum of ever-improving horse design. 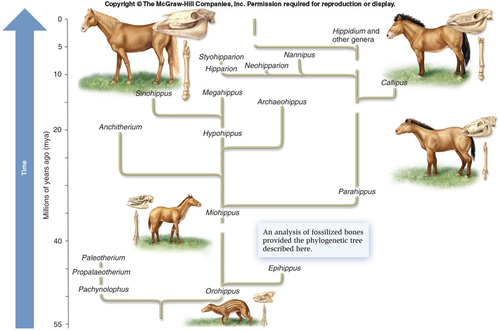 However, of more interest to Gould was that reference to Hyracotherium being the ‘size of a Fox Terrier’. To his surprise, he found it in a large proportion of the books he reviewed. But when he actually came to think about it, he realised that he had absolutely no idea what a Fox Terrier looked like, nor how big a Fox Terrier is. Nor did anyone he knew. It wasn’t a common breed. This suggested that the people who’d written all of the books that used the fox terrier comparison probably didn’t know what one looked like either. So had they simply copied the description from previously published books?

Gould dug deeper and discovered that the first appearance of the Fox Terrier comparison was in 1904 when American Museum boss Henry Fairfield Osborne published an article called The evolution of the horse in America in Century Magazine. He wrote: ‘We may imagine the earliest herds of horses in the lower Eocene as resembling a lot of Fox-Terriers in size …’ and, for nearly a hundred years thereafter, this description had been copied and re-copied by lazy researchers. Now, as it happens, this particular issue wasn’t really a problem because Hyracotherium really was the size of a Fox Terrier (about the same as a large Jack Russell and similar looking too). But, wondered Gould, had other facts been copied in this way too? Could this mean that modern texts might be repeating facts that science had since discovered were inaccurate?

Sure enough, he found that they had. For example, there were books, reasonably modern books, which stated that giraffes had ‘evolved their long necks so that they could reach the leaves at the tops of trees’. [1] This isn’t how evolution works; Darwin put us all straight on that in 1859 with his publication of On the Origin of Species. But, over a century later, some authors were still perpetuating a story of giraffes apparently masterminding their own neck extensions. Gould also found evidence of human development being described as a process of constant improvement; as if evolution, rather than being a series of adaptations to environmental factors, was instead some kind of predetermined and organised march from primate to divinity.[2] He therefore concluded that if people want the ‘right’ to publish facts and figures, they should discover them for themselves or, at least, go back to the original source material instead of copying quick and easy-to-find data that might be simply the latest iteration of a multi-generational error or inaccurate interpretation.

You have to verify that your data is correct.

[1] This was known as Lamarckism (or Lamarckian inheritance) after the French biologist Jean-Baptiste Lamarck (1744–1829), who believed that an organism passed on characteristics that it acquired during its lifetime to its offspring. Thus a giraffe that stretched its neck to reach the higher leaves would pass on the longer neck to its calves who would then stretch it further, and so on. Darwinism told a very different story. In this version, giraffes randomly born with slightly longer necks and legs had an evolutionary advantage over their peers. Maybe they saw the predators first and got a (literal) head start running away. Or maybe they could reach a food source that shorter giraffes couldn’t. Whatever the reason, they got to survive when other, shorter, giraffes didn’t and so they got to pass on their ‘long’ genes to their offspring. And, over the course of millions of years, and hundreds of thousands of generations, the extraordinary shape of the modern giraffe was arrived at, which, by chance, meant that the animal could now avail itself of a food source at the tops of the trees. 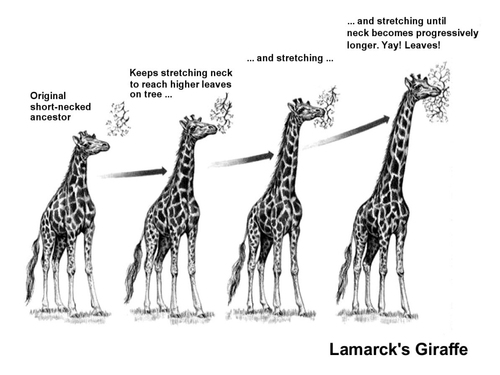 [2] The most famous and pernicious example of this is the famous 1965 ‘March of Progress’ illustration by Rudolph Zallinger that appeared in the Time Life book Early Man. It depicts 14 primate species from the gibbon-like Pliopithecus through to modern man.

Despite the text clearly stating that it is not a linear progression, it has become a powerful iconic image and has spawned hundreds of imitations and variants, all suggesting steady progress and improvement.

The book’s author, F Clarke Howell, was naturally frustrated by how the image was interpreted: ‘The artist didn't intend to reduce the evolution of man to a linear sequence but it was read that way by viewers’, he told ID magazine. ‘The graphic overwhelmed the text.’ But versions of it continue to appear and probably always will. 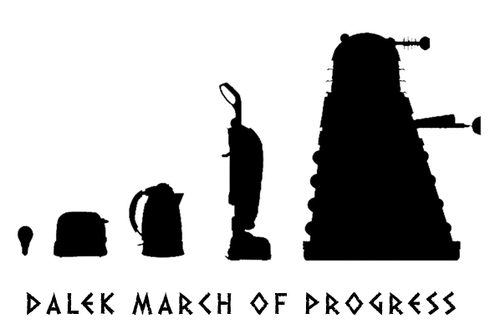 Heh, brilliant :) It's the equine equivalent of 'an area the size of Wales' ;)

I see this kind of thing all the time when it comes to internet safety sessions - I have a few things that act as litmus tests to determine whether the person trying to tell me something is worth listening to or just rattling off dogma. Just a few weeks ago I was informed that you have to be careful what you download because some of those programs can make expensive telephone calls through your modem...

Sideline: We're used to mocking Lamarckism as an incomplete understanding of evolution, but every now and then a story popping up suggesting DNA may carry traces of biological changes based on life experience. Just a couple of years ago Emory University did an experiment where they trained mice to be scared of the smell of cherry blossom and registered the same fear reactions in the offspring of those mice even though they hadn't been exposed to it until then. I haven't read the paper so I'm not sure how sound their methodology was, but it seems to be referenced lots, so... ;)

Just recently Cambridge University and the Wellcome Trust reported that a percentage of genes seem to be passed on 'as is' to offspring rather than starting with a clean slate based on some master set carried in each parent. That implies that the offspring can indeed inherit a starting point that's skewed by life events experienced by the parents.

All fascinating stuff - I love this kind of thing :)

Craig - Indeed. I had the pleasure of doing a gig with Tim Spector not so long ago. If you don't know him (I'm sure you do) he's the guy that wrote 'Identically Different' - an extraordinary book about the emerging science of epigenetics. I devoured it.

It's not fair to say that Lamarck was completely wrong any more (although he was, mostly). But at least he had a go :)

Identically Different - That's the SECOND thing you've reminded me I needed to do this weekend! The shed clearly offers benefits way beyond the obvious ;) I saw Tim Spector's TED talk about identical twins and made a note to get the book but it fell out of my head.

This reminded me to dig out an early WAWOW IANS Pad whiteboard animate - The March of Progress - and I couldn't find it via the WAWOW.co.uk website but here is the link from creator Sam Seal's Abradacamera YouTube stream: https://www.youtube.com/watch?v=ZHMiI8Ixc70

BTW have you watched and then straight away googled Aquatic Ape Theory yet?! :-)

"Poo Transplant", anyone? I'll take option number 2. See what I did there? ;)

Ruth - I have a great book here on the whole aquatic ape theory. It's interesting but I'm yet to be convinced :)

I was in Kents Cavern the week before last and smiled when the tour guide told us about an ancient horse 'about the size of a terrier' :)