So ... you're a motor vehicle thief specialising in motorcycles. Which one of these take your fancy?

Or how about from this selection? 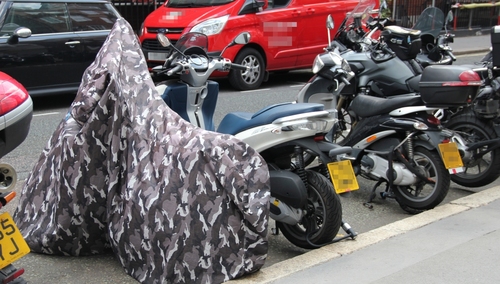 Putting a cover over a bike doesn't cost a lot. And it doesn't take very long to do (and you'll have a dry bum on the ride home from work). But it might just deter a thief because they don't know what's under there and it's hassle to get the cover off - especially if it has ties or cords or locks of some kind. And cutting a hole to look inside is behaviour that might just arouse suspicion.

This is a simple example of target hardening - making things difficult for the bad guys.

Most thieves are opportunists - they see something that piques their interest and they think 'I'll have that'. But then they do a kind of risk assessment in their heads to decide if the risks outweigh the spoils or vice versa. The more risk you can load onto their shoulders the better. And removing the interest in the first place is a no brainer.

Target hardening is one of 10 basic principles of crime prevention. None of them are terribly difficult to apply. Most are relatively inexpensive in terms of time and money. They are:

Any of these, or a combination of them, will make you and yours less likely to be the victims of crime.

It's not hard to get hardening.