Yes, it's that time again folks. The turkey is gone, the tins of chocolates rattle with the few sweets that no one likes and your bottle recycling bin has never looked fuller. You daren't stand on the scales for fear of a heart attack and you promise yourself that one of your New Year's Resolutions is to lose weight. You consider joining a gym ... but it's so expensive! Mind you, it would mean you'd have less money to spend in Krispy Kreme. But maybe there's a way to make gym membership cheaper ... what if you part-paid the gyms energy bills in sweat?

Comedian and activist Chris Coltrane (whose Edinburgh show was one of the smartest I saw this year - you can watch it here for free) was discussing this issue with a friend: Could gyms be powered by the energy generated by the people using it? The question lt led him to this site where he discovered that you can indeed get electricity-generating gym equipment.

As the feature says: 'By adopting power-producing exercise machines in this way, gyms can promote themselves as environmentally friendly and also reduce their electric bills. At least three start-ups in the United States are now selling equipment to retrofit aerobic machines—stationary bicycles, elliptical trainers, and steppers—into electricity-generating gear. These companies have already converted several hundred machines at dozens of U.S. health clubs and university gyms.' 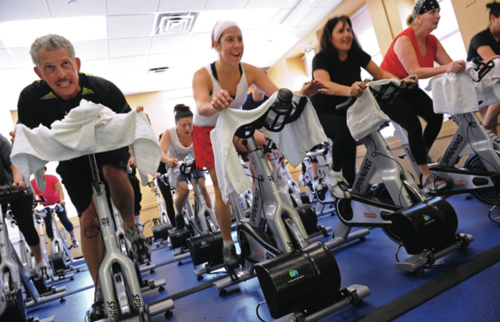 It's not all good news, however. As the feature goes on to report:

'The reality, though, is that this technology faces major hurdles before it can go mainstream. For one thing, the economics aren't very enticing. The energy output from a single exercise machine is quite small: Unless you're Lance Armstrong, you might be able to power a ceiling fan while spinning a stationary bike, but not much more. So a gym might have to wait decades to recover the money it spent converting its exercise machines to generate electricity. What's more, the energy output of these machines is so low that the environmental benefits they provide are scant. So don't expect that fitness enthusiasts pedaling stationary bikes are going to free the United States from its addiction to fossil fuels.

Backers of the technology respond by comparing the current cost of these machines with that of technologies like compact fluorescent bulbs or solar and wind power, which many people doubted would ever take off. They claim it's only a matter of time until every exercise machine comes equipped with a generator. And with some 30 000 gyms in the United States, that would mean millions of machines—and many more in people's homes—whose combined energy would then be appreciable.'

It's an interesting idea isn't it? There are already devices out there that allow you to convert your sweat and effort into usable electricity, such as the Siva Atom phone charger (other makes and models are available) that tops up your phone as you pedal and, in some Third World countries, pedal power is driving pumps and drills and grinders and all sorts of essential machinery in places that can't afford or can't be connected to the mains. (Lots of interesting ideas here).

January will see a huge surge in gym membership. Okay, so the energy generated by all of those spinners and cross-trainers isn't huge ... If each patron generates 100 watts while using it, a machine creates some 183 kilowatt-hours of electricity a year. Commercial power costs about 10 cents per kilowatt-hour on average in the United States, so the electricity produced in a year from one machine is worth about US $18 dollars. But if every machine in a gym did the same, and if the machines could be made more efficient, maybe there will be an incentive scheme one day where the amount of electricity you generate personally while getting fit and losing weight could result in you receiving a reduction in membership fees for the year?

Lose the pounds and save pounds.

It's a slogan just waiting to happen.

I would love to lose pounds to save pounds domestically - it could be a bright, lighter future :-)