2016 kicked off with rain, rain and a bit more rain. But, just before the New Year we had a gloriously sunny Bank Holiday Monday and it coudn't have been better timed.

On that day I met up with Stephen J Dubner - co-author of the mega-bestselling Freakonomics books - in London to talk about policing, crime and this book, Why Did The Policeman Cross The Road? that you, dear shed visitor, have helped to make a reality.

Here we are in a filthy little alleyway in Soho doing podcasty stuff. Honest. 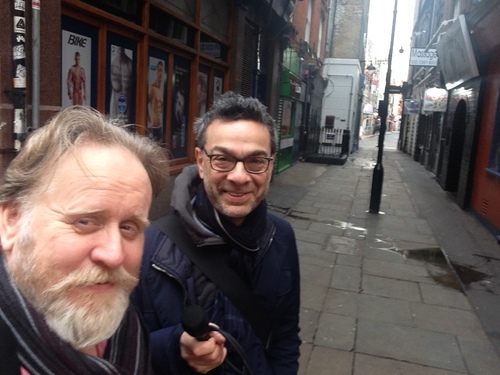 I also apologise for that beard. It was for Santa stuff. I'm not a hipster.

Anyway. I won't say too much more at this time but Stephen and his team are putting together some very special Freakonomics podcast episodes for 2016 and I'll be featuring in some. I'll let you know more closer to the date.

You can also hear Mr Dubner's dulcet tones on the first episode of the new series of The Museum of Curiosity next Monday 11th January at 6.30pm on BBC Radio 4. Also on the show is comedian and writer Holly Walsh and the amazing Dr David Bramwell. It's hosted, as always, by QI supremo Mr John Lloyd and this year's brilliant curator, Sarah Millican.

Well worth a listen!