I was very saddened to hear of Sir Terry's death today at the stupidly young age of 66. I was lucky enough to work with him on a few occasions and he was never less than charming, warm, and as sharp as a razor. 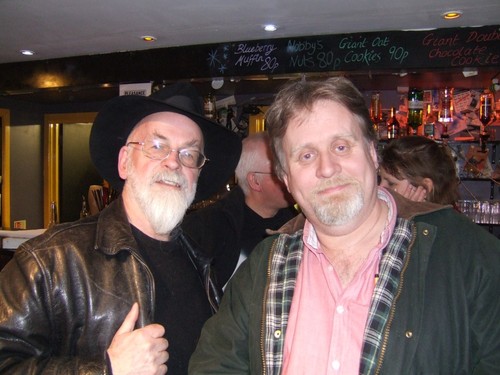 He appeared twice on The Museum of Curiosity - once in the studio and once at a live charity staging of the show at London's Natural History Museum where his suggested donation was Darwin's statue as 'he looks like me, has the same sized head and would make a wonderfully extravagant hat stand'.

I'm not a lover of fantasy fiction and, I'll admit, I've read very little of his work. But I respected the man and was in awe of his facility for words and his honesty. I did once ask him where I should start if I ever decided to read his books. He suggested about four books into the Discworld series as 'I was learning to write for the first few'. That said, I have read several since and, while it's still not to my taste, I can see why he was so popular. He was a comedy writer of the first order and a genuine philosopher.

But what I really loved about Sir Terry, however, was how he looked at problems. Whether it was living with his 'embuggerance' of early onset Alzheimer's or finding a plot device to progress a storyline, he always had the most extraordinary ideas and solutions. One of my very favourite ideas of his was the invention of 'procrastinators'; special engines that could wind or unwind time so that 'unused' or 'spare' time could be stored for later use by busy people. Genius! As for real problem solving in the real world, he approached his illness with the same wisdom and dignity. At the museum live show he said to me (this won't be verbatim but is close enough) 'Everything I do these days is like going on a journey from A to B but, sometimes, I find that my brain has switched off some of the knowledge I need to get there. One journey I might forget how to drive. Another I might not remember how to read a map. So I'm learning to ask people to help me re-learn those things so that I can get to B.' And that's exactly what he did. We explained the format of the show, who he was on with, how the timings would go etc. and he went confidently on his journey - from A to B - on the stage and, for 45 minutes was gloriously funny, entertaining and original. No one in that audience would have been disappointed. An extraordinary man.

It's a sad sad day today.

Rest in peace Sir Terry. My condolences to those you loved and who loved you.