Save the Whale Poop!

Saving the whales is obviously a good thing. And not just because they’re stunningly beautiful, majestic and smart. In an eerie parallel of the plot of Star Trek 4: The Voyage Home, it turns out that the whales may just have the key to saving the planet.

When larger whales evacuate their bowels what emerges is something that looks like pink diarrhoea containing a few hard squid beaks and undigested shells. The colour comes from their diet, mostly small crustaceans such as krill. Whales that feed on larger prey like squid tend to have paler colour poop but what it lacks in colour it makes up for in usefulness. Sperm whale poop, for example, is very rich in iron. This is a good thing because iron stimulates the growth of phytoplankton (plant plankton), which then serves as a carbon trap. Just like plants on land, phytoplankton absorbs CO2 and puts out oxygen. It then holds onto the carbon and uses it for growth. It’s been estimated that phytoplankton alone remove some 400,000 tons of carbon from the atmosphere each year. So whale poop has a significant impact on reducing the greenhouse effect, it seems. 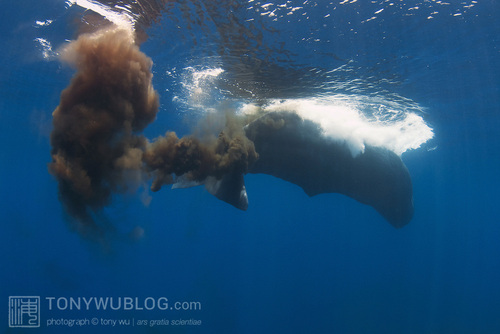 Of course, whales also create CO2 every time they breathe out, just as we do. However, it is around half as much carbon as they help to trap. Sperm Whales in the Southern Ocean release around 220,462 tons of carbon when they exhale but their poo stimulates the drawdown of 440,925 tons of carbon, according to research by Trish Lavery, a marine biologist from Flinders University, South Australia. ‘In the past, whales may have made a substantial contribution to carbon drawdown’, she explains. ‘However, most whales are currently at 1-10% of their historical population sizes. If Southern Ocean Sperm Whales were at their historic levels, meaning their population size before whaling, we would have an extra 2 million tonnes of carbon being removed from our atmosphere each and every year.’ That’s an extraordinarily good reason to save the whales.

And a solution to the global warming problem that is smart, humane and civilised.