Here's a round-up of news and some problem solving interestingness from the past month.

I'm conscious of the fact that I've been a bit too active in my shed of late and have been bombarding you with great stories. There's just too much good stuff not to share! So I've taken it back to a monthly thing. You can still expect some brilliant stories though.

Like the cup designed to help people drink more water, for example. But more on that in a mo. First, here's the November news.

Why Did The Policeman Cross The Road? has now gone through its second edit and is just about to go to the proofreaders. Realistically, it won't get done until after Christmas now but it will all be done by January. Then comes typesetting and design, final cover artwork, proof printing and checking and voila! the limited edition hardback and e-book  will be with you all in the Spring. The also splendid but slightly less special (for those ordinary non-pledging folk) version will hit the shops in May.

I'm doing some work with Stephen J Dubner, co-author of Freakonomics, in December. His award-winning and multi-million download podcast is planning an episode or two on policing and I'm going to be looking at the British side of the Atlantic. That's quite exciting. More news as I get it.

Also exciting is the fact that I just did my first TED Talk. As soon as the video is on the TED website, I'll post a link to it. I also spoke at the massive Mindshare Huddle event this month which trended #1 on UK Twitter that day. Wow. My talk wasn't recorded but there is this short interview with me afterwards talking about the future of media. You can see it here. All of the videos from this year's event are here. 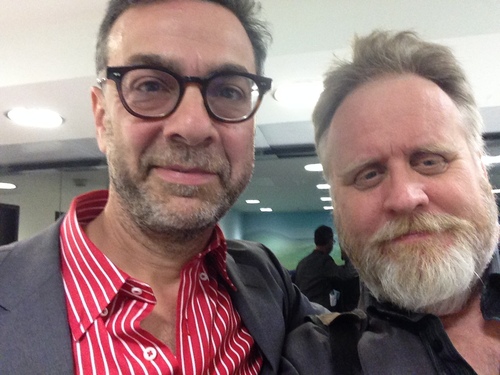 January will also see me back on the annual QI bus, researching and writing Series N with our fabulous new host Sandi Toksvig. As in previous years, I'll have overall responsibiity for two episodes (as all of us elves do). Stephen will be much missed but Sandi is wonderful; funny, charming and all kinds of lovely. She's raring to go and so are we.

Also, Series 8 of The Museum of Curiosity will start broadcasting on Monday evenings at 6.30pm on Radio 4 starting on the 11th of January. The show will be repeated on Sundays at 12.04pm starting on the 17th. We have a stellar line-up of guests as usual and joining host John Lloyd this year as guest curator is the fantastic Sarah Millican. Here she is with the production team (LtoR James Harkin, Anne Miller, me, and Richard Turner. John had popped out somewhere): 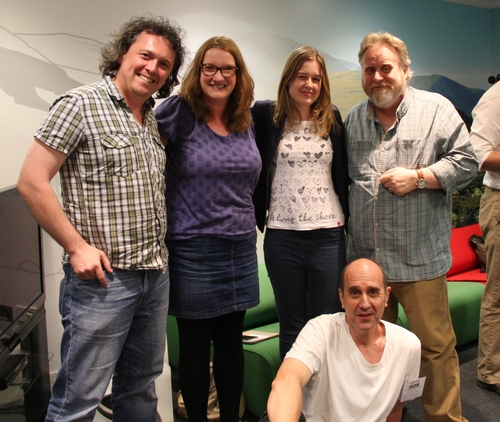 The final and most exciting piece of news is that while Why Did The Policeman Cross The Road? is trundling inexorably towards production and getting to you, I've launched another book with Unbound. And it's a novel.

A Murder To Die For is a black comedy set in a village that annually hosts a murder mystery convention celebrating the life and works of writer Agnes Crabbe. But when one of Crabbe's most prominent fans is murdered on the first day of the festival, the police find themselves trying to solve a crime in which the victim, witnesses, almost everyone in the village, and even the murderer, are all dressed as characters from her books. To make matters even worse, they are not only pitted against the murderer but against hundreds of wannabe lady detectives all keen to solve the case for themselves. If you like novels by people like Tom Sharpe, Michael Frayn, George MacDonald Fraser or David Nobbs, I think you'll like this. And if you like classic murder mysteries I think you'll like it too! I've spent a year developing a deliciously twisty-turny plot. You can read more about it on the Unbound page for the book here.

Now, what was I saying about making water easier to drink?

Isaac Lavi is diabetic and has to monitor his sugar intake. And he knows lots of other diabetics and one common moan is that they can't enjoy fruit juices or sugar laden pop and, instead, have to drink plenty of 'boring' water.

'My doctors advised me to stay away from sugary beverages and to drink only plain water. This was very hard because I hated the taste, or actually the lack of taste', Lavi told Mashable.

An expert in the field of scent marketing and a determined entrepreneur, Lavi sought a solution to his problem. Six years of research and development later, he created The Right Cup. 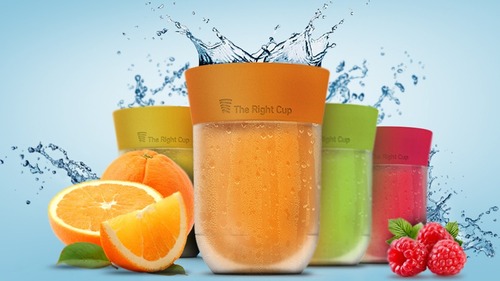 'When you pour water into the cup and then drink from it, your nose picks up a fruity aroma, your tongue senses a hint of a sweetness and the vibrant fruity colour enhances a realistic taste experience,' he explains. 'The brain is tuned to expect things and to compare them with past familiar experiences. So each time you drink from The Right Cup, the brain learns to better understand the taste experience, the result being an increased enhanced flavour experience each time you drink.'

In order to create this scented experience, aromatic fruit flavours are put directly into the cup's material. The fruit aroma combined with the taste technology gives the illusion of drinking a sugary beverage. In actuality, the water maintains its zero calories and has no additional preservatives or additives. Apart from diabetics, it is hoped that the cups will encourage adults and children to drink more water. It could also help with the current epidemic of obesity.

Lavi launched his concept on the crowdfunding Indiegogo site and it was 100% funded in just four days, which shows that there is demand for such a thing. The cups go on sale next year and will be available in mixed berry, apple, lime and orange flavours but he hopes to create more in the future.

Finally, some other interesting stuff that caught my eye:

An explanation of the the science of Six Degrees of Separation

Charles Dickens' advice on how to be a decent person

We're not as selfish as we think

An interesting dscussion on fitting police officers with cameras

Why your bathroom scales are lying to you