Jason Donovan and the Police Shirts of Doom

85% funded! I might venture a little 'squeee' of excitement if you don't mind.

I was up until the wee hours (not the squeee hours) this morning sweating and labouring over a chapter on research and how vital it is. One aspect of research I was keen to stress is the importance of seeking data from more than one source to (a) get the best possible picture of what's occuring, and (b) verification. However, I quickly found myself 'going off on one' about the gutter end of the tabloid press that is almost genius-level brilliant at taking one small piece of data and using it to present an entirely skewed version of a news story. Or a non-news story.

After about an hour of this I read back over what I'd written and realisd that it wasn't right for the book. But there's no harm done putting it here in the shed is there?

Back in the 1980s, when Australian soap Neighbours was new to the UK and stars Kylie Minogue and Jason Donovan were the nation’s sweethearts, a certain type of reporter was always trying to dig up some dirt on them to burst their squeaky-clean bubble. Years later I was told by an ex-reporter that he’d actually heard one of his colleagues phone Jason’s agent to ask, ‘Does he do drugs?’ On receipt of a strong negative reply, the reporter selected a particularly poor photo of Donovan looking tired and paired it with the headline ‘Jason Donovan denies taking drugs’. It would be a statement of fact, a complete non-story, but it would make people pick up the magazine in the belief that the pretty boy from Ramsay Street was not so sweet after all. Just seeing the newspaper’s headline and not asking further questions would have led many people to completely the wrong conclusion.[1] 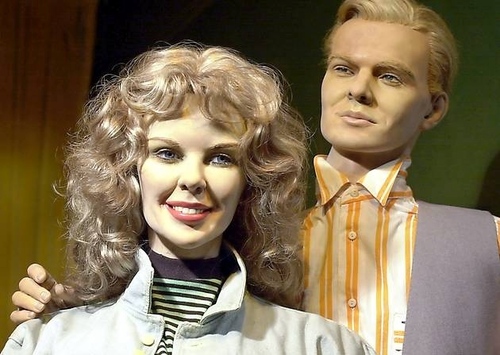 A brilliant Kylie and Jason waxworks exhibit from Louis Tussaud's House of Wax, Great Yarmouth. I reckon the press photo of Jason looked like that.

Here’s another example: In July 2010 West Midlands Police issued its front-line officers with new shirts that would allow the public to tell at a glance whether someone is a police officer (black) or a community support officer (blue). The total cost was £100,000. The Taxpayer’s Alliance was immediately up in arms. Spokesman Mark Wallace said: ‘I think it's absurd to spend money on cosmetic changes at a time when police forces are feeling the pinch. The old uniform shirts did the job and this is not going to reduce crime. I think the public would prefer police to focus their money on catching criminals.’ The story had been featured in various newspapers and on the BBC News website under the headline of: ‘West Midlands Police ‘wastes money’ on new shirts.’

£100,000 is a substantial amount of money but let’s look beyond the inflammatory headlines. Firstly, we are talking about clothing the second largest police force in the UK. West Midlands Police has 8,449 police officers, 623 special constables and 789 CSOs (Source: WMP website). Some officers (CID etc.) don’t wear uniform, but even if we over-exaggerate and assume that only half the force wears uniform, that works out at just £20 per head, and that was for several shirts per officer. And, despite the selective headlines of the various news reports, the change was not made for cosmetic reasons; this wasn’t about making the police look pretty or more macho. It was about protecting officers from harm.

I’ve worn body armour, both overt and covert, and it’s heavy and uncomfortable. And, more importantly, a standard issue uniform shirt wasn’t designed to accommodate it. When we were first issued armour in the Met, we all found it restrictive and uncomfortable. Comfort aside, any restriction of movement, however slight, could affect an officer's ability to defend themselves, or members of the public, during a violent incident. The Met issued new shirts at a cost way in excess of £100,000 I assure you. However, they didn’t change the colour so no one noticed. I imagine the same happened all over the UK. But West Midlands did change the colour ... and for all the right reasons; it ensured that a community support officer – who has almost no police powers and doesn't carry defensive equipment – wouldn't be mistaken for a police officer and vice versa.

Senior police staff don’t make spending decisions like this lightly, especially when they know that they’ll be under the spotlight for doing so. I wonder if the Taxpayer’s Alliance would begrudge soldiers being given better, potentially life-saving uniforms for just £20 each? Sadly, as long as the media is content to use incendiary phrases like ‘wastes money’, they will continue to fan the flames of dissent in people who don’t make the effort to do further research.

[1] I never did find out if the paper ran the story … but I wouldn’t be surprised if they had. Donovan did develop a drugs problem later in the 1990s following a traumatic libel suit against The Face magazine which had claimed he was gay. But, back in the 80s, when the ‘denies taking drugs’ event occurred, he was clean.

The reason I left these two stories out was chapter size; I have so many more great examples! In this one chapter I talk about street robberies, wizards, sex toy purchases, things the Daily Mail says will give you cancer, preventing burglaries and Hyracotherium, the oldest ancestor of the horse.

If that doesn't get you pledging on this book so that you can read it as soon as possible ... WHAT WILL??

Just wanted to say, Steve, THIS (and all your other blog posts. Yes, we do read them!) is why I can't wait to get your book published. Come on you 15%....

The problem with the shirts as indicators of status is that it only works if people know the system. I didn't, so it would be no use to me whatsoever. If you looked around a hospital ward from the 40s/50s , you could - in theory - work out who was a senior nurse, or a junior one, and even in which hospital they worked from their hats.

But I bet you don't know the hat code - so you'll just have assumed an old nurse was senior to a young one, and that they worked in the hospital in which you were stood. (That's pretty much how we did it. No one except the nurses actually knew the hat code.)

I've just upped my pledge to the book, you've convinced me that I need a hard copy.

Pat - That is a very valid point. As I understand it, the change in shirt colours was publicised in the local press and on local radio, which is doubtless where the national tabloids picked up the story. The nurse's hat code thing is really interesting. Reading about it now ...

Ewan - Ah you're a good man! Looking forward to yours too!