Not so much problem solving but a glorious piece of journalism by a man desperately trying to cope with a problem.

Telegraph sports journalist Ben Bloom was sent to a press conference today to cover the story that Jurgen Klopp intends to leave his job as manager of Borussia Dortmund. Unfortunately, the press conference was in German ... a language that Bloom doesn't speak fluently. And Bloom had been hired to live-blog the event ...

Here's what happened next:

Klopp has just sat down to face the media...

Right we have a slight issue... they are speaking in German and my GCSE in the subject isn't much help. What I can deduce is that the bloke currently speaking (I'm assuming he's the Dortmund chief exec or something) genuinely sounds like someone has died. He's properly choked. Oh he just said "fantastisch". I'm guessing he wasn't describing Klopp's decision to leave the club.

I'd love to tell you what Klopp is saying. He is saying a lot. But I can understand precisely none of it. So here's a photo of him pouring some water instead: 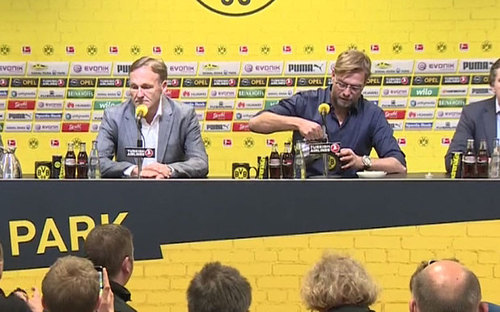 I have a couple of translations coming through.

Klopp: "I chose this time to announce it because in the last years some player decisions were made late and you couldn't react."

"It's not that I am tired, I don't have any contact with another club but I don't plan to take a year off either."

I'm afraid I cannot verify how correct those sentences is. I'm rapidly realising that I am as close to useless right now as I have ever been in my life.

I am going to email my old German teacher Dr Plow after this and apologise.

Klopp has finished speaking and we have just heard from a chap with a lovely slicked back hairstyle. Although most hairstyles look lovely to me.

So, in lieu of someone with any semblance of knowledge of the German language, I shall now consider what we know:

If that's not insightful then I don't know what is.

They have just opened up questions the floor. I'm afraid the questions are just as German as the answers.

Oh, we have one more translated line! ""I don't think of it as a load off my shoulders. I'm not tired, even though I look like this."

WHY DON'T WE HAVE A UNIVERSAL LANGUAGE ACROSS THE GLOBE???

I am genuinely sorry about this. I realise this is highly unprofessional. Don't tell my boss I can't speak German. He thinks I'm translating this press conference word for word.

The big man is still answering questions. I managed to catch the following words: "Extreme", "Sport" and "And". Make of that what you will. In my mind he's considering a new career as a skydiver. 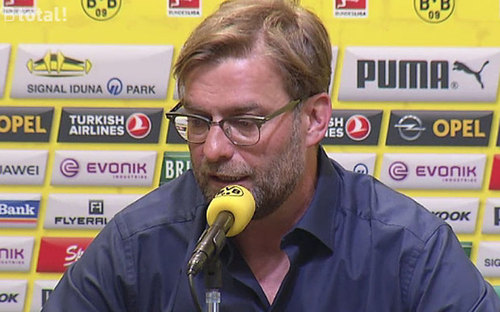 Klopp just cracked a gag and the entire press conference audience laughed. A joker to the end. Or almost the end. Remember he's staying in the job until July 1.

(Thanks to the person who tweeted me a "How to learn German in 60 seconds" video. It didn't work I'm afraid.)

It's finished! What? I didn't expect that. They said thank you, got up and left. What on Earth do I do now??? I haven't enlightened one reader and they've already left!!! Erm...

Someone that speaks German has actually done some proper translating! Praise the lord. Right I'm going to pass this off as my own and hope no one notices.

Klopp: "I always said in that moment where I believe I am not the perfect coach anymore for this extraordinary club, I will say so.

"I believe this is the right decision at the right time.

"I have not had any contact with any other clubs, nor have I any plans to take a sabbatical.

"I just wanted to make my decision known now so that the club can plan for the future.

"I chose this time to announce it, because in the last few years, some player decisions were made late and there was no time to react."

So it turns out the bloke almost in tears earlier was Dortmund's sporting director Michael Zorc and these were some of the words he managed to get out before breaking down completely (N.B. He didn't actually break down).

"We have written football history with you, Jurgen. You have given the club much energy and optimism."

Can you feel the love in the room?

Oh what?? Sky Sports News have just played a snippet from the press conference and they had a bloke translating Klopp's words. How did they find a German speaker and the Telegraph was lumbered with me? I fear I have damaged the reputation of this once great institution considerably.

Es tut mir leid. (Google translate tells me that is "I am sorry" in German)

Isn't that glorious? The original webpage is here. My thanks to the splendid Mr Dave Turner for alerting me to this delicious slice of comedy pie.

Das war hervorragend!! (That was awesome!! Just my kind of humor.) Even though I know a lot of German, having lived in Deutschland for a year as a teenager, I know I would still have trouble following a press conference.

My German is about as good as my Icelandic or Swahili.

I just roared when I saw this story slowly unfold in real-time. Glorious! :)