I went to the Oxford Literary Festival yesterday to do a double-header talk with Dr Sue Black OBE about her new book Saving Bletchley Park (to which I contributed some historical stuff).

My journey involved using the brand new Oxford Parkway train station adjacent to the Water Eaton Park and Ride area. The station itself isn't too badly designed; it's outside that the problems occur as you wait for the 500 bus to take you into Oxford itself.

I waited there, at the marked bus stop, with about 10 other people. Before too long, the 500 arrived and the driver told us: 'This is drop off only - you get on at the main park and ride building.' The bus then drove off along a short U shaped road towards the park and ride building. We  11 then rushed to get to the same building so that we could get on the same bus that had just refused us entry. However, even though the park and ride building is directly opposite, the footpath to get to it is long and winding and circumnavigates an area of grass. So what did we all do? In our hurry to get to the bus, we all took the direct route - across the grass. And, presumably, that's what everyone has done since the station opened because the grass is now gone, replaced by two muddy paths. 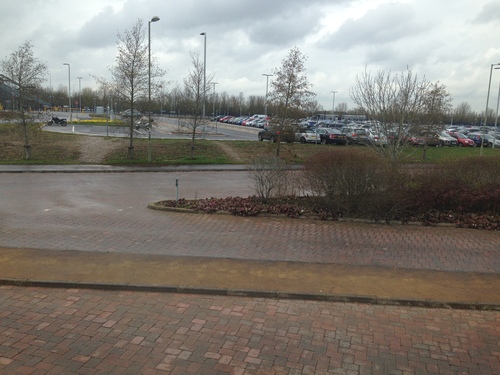 This photo (above) is taken from the park and ride building. The train station is in the distance. Here's the muddy path in close up. Or, rather, two muddy paths.

These are what planners call 'Desire Lines'. They show clearly the way that people want to go. So why didn't the planners of the new station put a path there?

To be fair, you sometimes don't get to know where to put a path until people show you where they want one. And, on other occasions, there may be good reasons why you want people to take a specific route. Safety is an obvious example, which is why we use things like railings to shepherd people to safe road crossing points e.g. 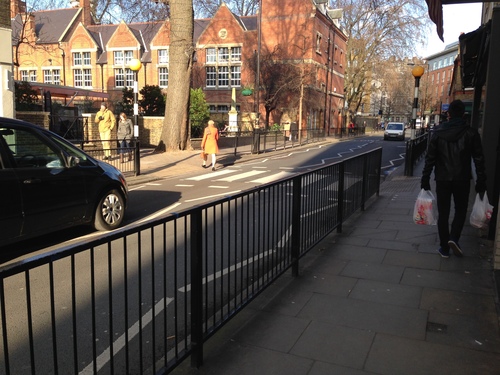 Or to relieve congestion in busy places using barriers and no entry signs ... 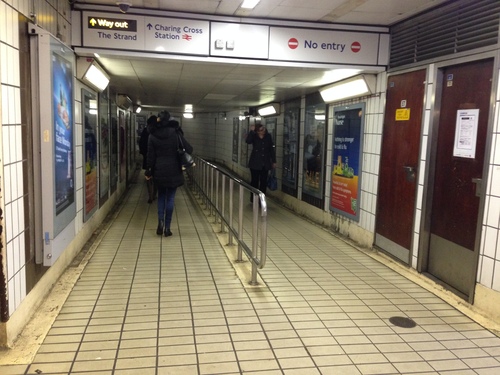 Or subtle 'nudges' such as these painted footprints on escalators, to encourage people to stand on the right to allow those who want to walk up the stairs to pass by ... 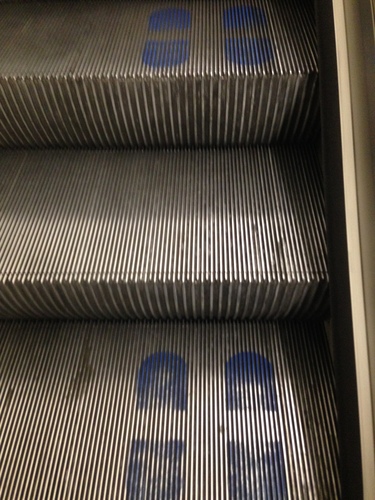 But no such good reasons exist at Oxford Parkway. It's not dangerous to cross there (at least, no more dangerous than anywhere else) and there is no good reason why that grass bank has to be there. So people are going to continue to behave badly and follow the desire line. The grass is never going to grow back and, if yesterday is anything to go by, customers of the transport companes are going to be livid about their muddy shoes and the 'jobsworth mentality' of the bus drivers. That's bad feeling that could so easily have been avoided.

In time, we may see the mud being turned into a properly surfaced path. Or paths. The fact that there are two tells me that, at peak times, there are people going in both directions between the two facilities. But the additional expense of doing so could have been avoided by anticipating what people are most likely to do and by putting the path in the right place to start with.

Park and Rides are notorious for this kind of maze like madness. I travel about in a wheelchair and looking at that picture I see a whole heap unnecessary high kerbs and routeways.
I wonder if they design those parking areas for the flow of traffic in and out of the carpark. In doing so, they forget that people have to walk to the station.

Though the even better solution is for the 500 bus to pick up passengers outside the railway building! Another bit of poor planning is that for those of us who live north of the station, buses drop us off, and pick us up on the main road (lovely when it's raining) - why can't all (or even some) of those buses do a little detour into the station???

Poor planning - personally I wouldn't consider running across the grass "bad" behaviour - surely it's reasonable in the circumstances? A form of civil disobedience, perhaps. I hope the mud paths are made into proper paths, before someone slips. Get health and safety onto it!