Here's an exclusive extract from Chapter 8 of Why Did The Policeman Cross The Road; a chapter in which I discuss the many creative ways people have found for moving 'problem people' along. The chapter looks in some depth at the issue of homelessness and some innovative ways to tackle the problem in which everyone wins.

Tokyo's Ueno Onshi is the oldest public park in Japan and is popular for a number of reasons. It boasts a library, a zoo, museums and art galleries and it is very beautifully appointed with flower beds and trees. A popular time to visit is during the blossoming of the cherry trees when the park becomes a riot of colour and the ground looks to be covered in fragrant confetti. 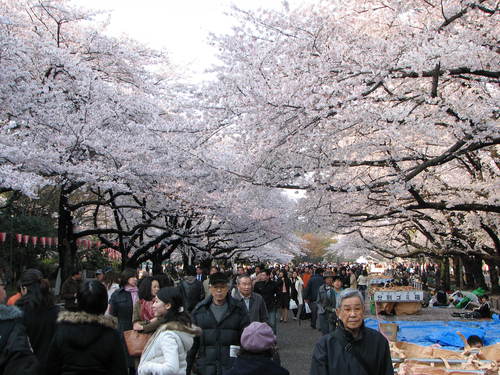 However, the park is not as welcoming as you might think ... the benches in Ueno Onshi are all curiously hostile to users. One style has hard unforgiving metal partitions that force you to sit uncomfortably upright. Another style slopes forward, meaning that you have to constantly brace yourself against the ground to avoid sliding off its polished stainless steel seat. A communal seating area has what looks like a giant steel sausage mounted on legs like a centipede. There is no back rest and nowhere to hook your feet under. Sit on it for more than a few minutes and your back starts to ache. Not that you’re likely to sit there for long. Stainless steel may be easy to keep clean but it gets very hot in the Summer and freezing cold in the Winter. 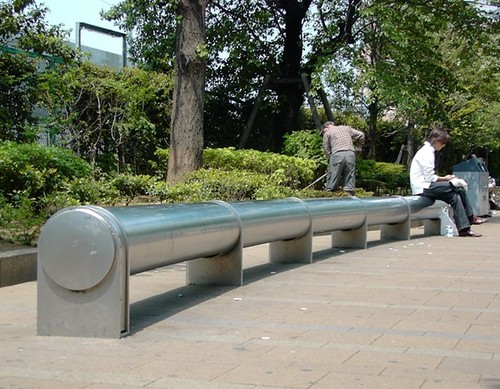 Elsewhere, grass verges and low walls are studded with protrusions at regular intervals to discourage skateboarders and anyone who might think of taking an extended rest. Thorny shrubs are planted behind low walls so that sitters get stabbed in the back. Even the public art is unfriendly, sporting knobs and spikes that make sitting or lying on them impossible.[1] To the casual observer, it would seem that Ueno Onshi has been specifically designed to discourage seating and loitering. The truth is more subtle. ‘Local governments could not get away with simply erecting edifices embedded with fragments of glass so they disguise them as ‘new designs’ and build objects unworthy of the designation ‘art’ in city centres’, says artist Kyoichi Tsuzuki. ‘I find it obscene that art - something that is supposed to enrich people's lives - is being used to exclude a specific group of the community.’ That specific group is the homeless. 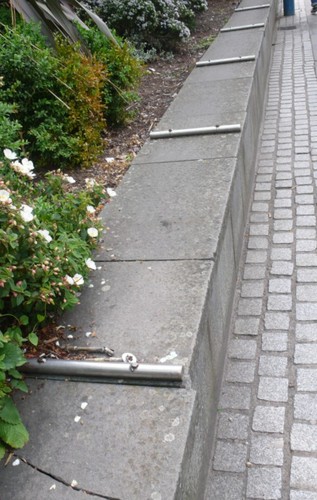 To understand why the city has taken this step we need to look towards the centre of Ueno Onshi where you will find, at any one time, up to 300 people sleeping rough in a motley collection of tents or shelters made of cardboard, shopping trolleys and other street detritus. It is a community constantly in flux as new people join and others leave and, as there are some 5000 homeless people in the greater Tokyo area, there is potential for a great many more to join this makeshift canvas village. It’s these people that the benches and other unfriendly structures are aimed at. 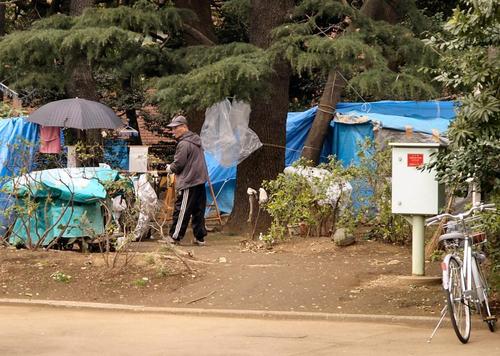 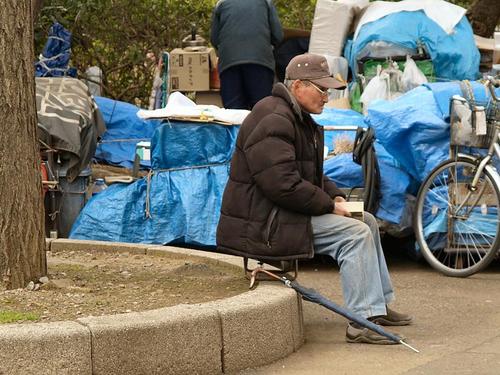 In Tokyo, many of the homeless are casualties of the ‘boom and bust’ Japanese economy. During the 1964 Olympics, thousands of workers came to the city to build a complex that would show the world that Japan had recovered from the Second World War. ‘Labour sharks’ would scout rural areas and recruit workers with promises of higher pay and a better life in the city. The men would be billeted, often many to a room, in old and decrepit properties, for which they paid exorbitant rents to their ‘agents’. The agents would also charge a fee for finding them work. Often, all the workers had left, after deductions, was just enough money for food. Then, during the late 1980s, the economy collapsed and thousands of low-paid casual labourers suddenly found themselves without work of any kind. It was around this time that Ueno Onshi’s homeless village was created. And so were the anti-homeless seating areas. The city’s response was to keep the homeless population contained by making everywhere else homeless-unfriendly. What they didn’t do – or didn’t do enough – was tackle the underlying causes of the problem.

Redesigning the benches to discourage rough sleeping isn’t going to prevent people from becoming homeless or help those that already are. Nor will it stop homeless people from hanging around the city. The proposed solution will solve nothing. All it will achieve is empty benches.

[1] You may recall the public furore in mid-2014 when it was revealed that a new block of luxury flats had been built in London with metal spikes set into the ground to prevent homeless people sleeping in the covered area by the front door. It’s not just the Japanese who do this stuff I’m sad to say. That said, the spikes were removed after a petition attracted 130,000 signatures.

If you'd like to read more about tackling homelessness, urban control through design and what all of this has to do with with controlling elephant stampedes ... do consider pledging on this book.