The most common question I've been asked since Why Did The Policeman Cross The Road? hit the 100% mark is 'When will I get my copy of the book?' I found out yesterday. And I suspect the answer won't be what people want to hear.

The current plan is for the book to be released in May 2016 although subscribers - you lovely people who were kind and trusting enough to fund me - should get your beautifully made limited edition hardbacks a little earlier (and possibly the e-book even earlier still - and every subscriber gets a copy of that).

Well, one of the joys, but also the pains, of crowd-funded publishing is that there's nowhere to hide; the entire process is transparent. What's happening with my book is no different a process than what happens with traditional publishing - a book may not hit the shops for a year, maybe even two or three years, after being bought by the publisher. But the first the buyer knows of the book's existence is when it appears in the shops and can be purchased. With Unbound, the reader puts the money up front and, unfortunately, then has to endure that wait knowing that the book takes that kind of time to create.

I've almost finished the book - I have one last chapter to bash into shape (and a final interview to conduct next Tuesday) - and I'm looking to deliver my first draft by the end of June/early July. The book then has to be edited, tweaked, re-edited and tweaked again. Then there will be a first, second and final proofreading before the book is designed and typseset. We'll need to think about the book cover - so very important - and employ an artist to create it. All sorts of minutiae will need to be discussed even down to choices of font and end paper colours. Unbound isn't a self-publishing, mass production digital printing press; it's a passionate book-loving publisher that crafts beautiful items for people to own. And that's all before the final product has to go to the printers, get proof-printed, return proof copies to be checked and approved and then printed and warehoused. At conservative estimates, that whole process is going to take 4-6 months (there's a 6 week turn-around on printing alone). That takes us well into Autumn - assuming I finish the book to my self-imposed deadline - and, for the book trade, that's too late to catch the Christmas market. A book needs to be physically in existence and on reviewers' and distributors' desks by the end of August to stand a chance of making any seasonal sales. And, of course, I'm just one book of many Unbound books going through this process at the same time.

It's also the case that there are certain times of year when book sales peak. Christmas is one; the other is before the Summer holidays. It's the best time to promote a new book too as there are lots of literary festivals and events that authors can attend. It's a fact that publishers have managed to stay afloat in a worsening marketplace only by shifting more and more marketing responsibility to authors, to cut costs and prop up sales. So Unbound and I have to go for the optimum time of year in order to shift books. At the risk of sounding selfish, I have to do what's best for me. You wonderful, splendid, philanthropic patrons of the arts have raised the capital to make my new book a reality ... but I haven't earned a penny from it yet. Eight years of research, interviews, self-promotion and physically writing the thing has actually cost me money. If I want to see some small profit from the book I need to sell copies of the finished product. And that's hard to do. It is increasingly difficult to make any book stand out. New titles are not just competing with a million recently published books, they are also competing with more than seven million other books available for sale. And other media are claiming more and more of people’s time. To put the issue in context, a book has less than a 1% chance of being stocked in an average bookstore; for every available bookstore shelf space, there are 100 to 1,000 or more titles competing for that shelf space. Statistics from a number of websites suggest that, on average, a non-fiction book by a non-celeb author will sell, at best, 2000 copies in the book's lifetime and a shockingly low 250 copies upon release. So I have to do anything and everything I can to maximise my chances in an already crowded marketplace. 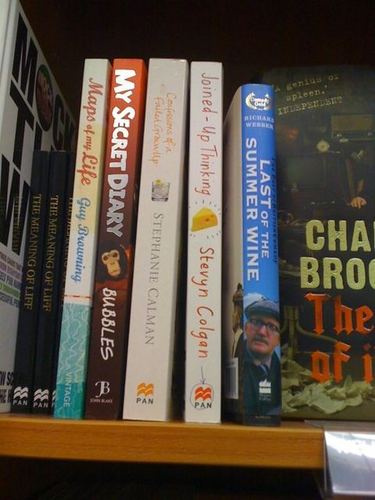 So, yes, there will be a bit more of a wait yet. But the way I like to think of it is like this: if you order a hand-made piece of furniture or a bespoke new suit, you expect to wait for it. Nicely made things take time to craft. The alternative is to go and buy something cheaper and mass-produced pret a porter at TK Maxx. In an age of instant gratification and 'make do' shoddiness and cheap mass-production I really love the fact that Unbound are making fantastic books. In just four years they've had several No.1 bestsellers, a Mann Booker prize longlist nominee and Paul Kingsnorth's The Wake recently won The Bookseller Book of the Year Award. That's huge! That's why I own so many of their titles. That's why I chose to pitch my books to Unbound.

And I'm also choosing to see the next few months as an opportunity. We'll get some activities going on here in the shed. The photo competition will be starting soon - it's taken a little longer than I'd hoped to bash out the legalities (for participants' protection and mine) but I'm just about there - so that'll be wonderful to launch in the next week or so. I'll keep posting interesting stuff in the shed and, as always, feel free to ask me anything. I also kind of like the idea of using the shed in a brainstormy kind of way where someone posits a problem and we all come in and make suggestions for solving it. I love that kind of interactive chat and I really enjoy the kind of relationship that this kind of crowd-funded publishing allows me to have with you, the readers. Another thing I intend to do is release some exclusive content in the shed that's only visible to subscribers.

So, watch this space. We'll fill it with fun and interesting things and the time will fly by.

"a non-fiction book by a non-celeb author will sell, at best, 2000 copies"

Have you considered changing your name to Ken Kardashian? Or Stevyn Fry? That should boost sales!

I'm looking forward to this book & can easily keep my excitement levels up for another year :)

"I really love the fact that Unbound are making fantastic books. ... That's why I own so many of their titles. "

"I really love the fact that Unbound are making fantastic books. ... That's why I own so many of their titles. "

I'm happy to wait. My tsundoku (pile of books I intend to read one of these days) is already taller than I am (5ft 3in)!

I love that your shed posts always provide interest and stimulation. You use the Unbound author's shed so fabulously that the wait is worth it for the wealth of information. Thank you for keeping us up to date on your book's progress and so much more than just that :-)

Keep up the shed posts mate, they're making our investment great value. You're putting @bobbyllew to shame :)

Junk food: you are fed raw sugar, you get an instant high, then a come down.
Real food: you eat it; gradually it feeds you and you achieve a long term high.
unbound is a bit like that: a year after you buy a book you get it: you fondly recall why you bought it and settle back to slowly enjoy it.

I will endeavour to keep you entertained and informed and the months will fly by.

Amazingly, Rik Mayall died a year ago. A year!