Getting Shirty with Sweat Shops

Would you buy a t-shirt for 2 Euros?

Most people probably would. But would you still buy it if you knew how it was made? 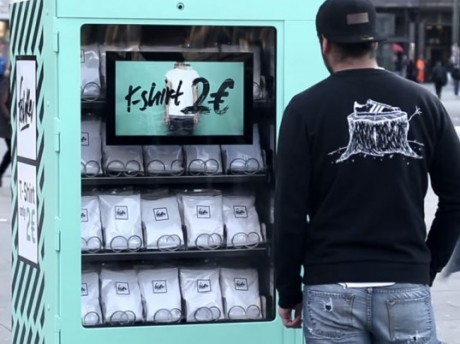 As part of Fashion Revolution Day this year, a vending machine was installed in Berlin, offering 2 Euro t-shirts. The machine was painted with an alluring turquoise and black pattern, and set in the centre of the city’s main shopping district, Alexanderplatz. However, there was a catch. As potential customers put in a 2 Euro coin, instead of vending the t-shirt, the machine showed shoppers images of sweat shops around the world, featuring the women and children who could have made the t-shirt in question. The disturbing and very real images were paired with statistics about inhuman working conditions, such as16 hour work days and wages of 13 cents an hour or less.

Once the video finishes, the person was asked if they still wanted the t-shirt, or if they’d rather donate the 2 Euros to a charity that helps people working in these conditions. Most gave the money to charity.

Cheap clothes seem extremely appealing, but if something is really cheaper than it should be, then someone’s not getting paid properly for making it and very likely, someone’s being abused.

A great idea for educating people.