Yes,indeedy. After 320 days of slog and self-promotion, 98 talks and continuous pushing this book on an unsuspecting public, I hit the 100% mark today. Thank you so much, each and every one of you, who contributed (and those who couldn't but still offered me goodwill and kind words). When your names appear in the back of the book, permit yourselves a pat on the back and a prideful flush. You've done more than just fund some old ex-copper's book; you're a patron of the arts.

You've defied the accountant-driven, risk-averse corporate world of book publishing where only 'celebrities' and safe bets seem to matter these days and you've helped to make a new book happen. You were there at the conception, you saw it through gestation and you'll be the first to witness the birth. And you've done so in the same week that a book published by Unbound - Paul Kingsnorth's amazing The Wake - won the Bookseller Book of the Year award. It's a staggering thumbs-up for the future of this kind of publishing where you, the readers, dictate the books that hit the shelves, and not some corporate algorithm. I believed in Unbound from the start. I now know I've hitched my cart to the right horse.

So when can you expect your copy of Why Did The Policeman Cross The Road? Well, the good news is that it's not far off completion, writing-wise. The chapter headings are as follows:

Epilogue: To get to the other side

Of those 12 chapters, nine are fully written (as is the introduction), two more are just about there and the 12th chapter and Epilogue are started. I have all the content I need, bar one interview I'm conducting in the next week or two, so I'm looking to deliver the full first draft of the manuscript to Unbound by the end of June. Then we have the fun of editing, proofreading, design, typesetting and cover art to sort. Hopefully, we can push it along at a fair lick so you're not waiting too long.

Meanwhile, there will be the photography competitions to keep you entertained. As you may know from a previous shedpost, I'm planning to crowdsource around 30% of the images in the book (I've supplied the rest). I want YOU to have an even bigger part in making this book happen. I don't have cash to offer but I can promise that the images selected will remain the photographer's copyright and will only ever be used for this book (and any subsequent editions). All photos will, of course, be credited in print. Everyone who enters will be automatically eligible for a series of prize draws, and everyone whose photo gets selected for use will get an additional prize. I'm currently collecting up a stock of goodies and they include, so far, signed books by the likes of Stephen Fry, the late Lauren Bacall and Sir Michael Caine, signed DVDs by Bill Bailey and others, plus some curios, artwork and even original props from That Mitchell and Webb TV series. Watch this space for more news.

So, once again, thank you so very, very much for helping make this book a reality.

If it gives you half as much pleasure reading it as I've had in writing it, then I'd like to think you won't be disappointed. 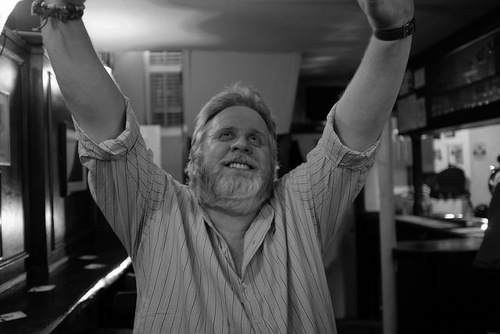 P.s. Oh, and if you're anywhere near Brighton this coming Wednesday (20th), I'll be talking about some of this stuff at The Fringe with Dr David Bramwell, Nicole Pohl and Robert 'Kryten' Llewellyn. Come say hello!

Congrats, Constable C! Never doubted you for a moment :)

For me this book will be an amazing tool to tap a few people gently on the forehead with at work and say 'You see? It IS actually possible to engage your brain and do things that haven't been done before!' :)

Thanks Craig! You've been solid support all the way through :)

Brilliant news! Can't wait for it. And now 101% funded! You're rich beyond your wildest dreams.
What pics are you after still, for the book?

This is fantastic news. I knew from the first time I saw your book on unbound that it would be one I would really enjoy and if your shed posts are anything to go by the book will be an intriguing read. Congrats :)

Oh and your chapter titles are wonderful! Lobsternomics and Tim Minchin... great stuff!

Huge congrats Steve, cant wait to read it. Hope to meet up with you some time soon for a small beer.

“I agree with Craig”

Wonderful news! Congratulations. I can't wait to have the book in my hands. Though I'll miss your Shedposts!

With only three chapters and an epilogue to go, you must be thinking of a follow up book? Put me down for another tenner.....

Thank you all for the kind words! I'm as chuffed as a chough who's the mayor of Chuffington. I'm currently juggling finishing off the book with writing the new series of QI and Museum of Curiosity but I will get the book to you ASAP. First draft is very nearly there :D

Well done! Couldn't have happened to a nicer guy :)