Fun is the best incentive

So. How do you get people to use the stairs instead of the escalator or lift? It's a genuine problem during peak times in places like train stations, hotels and airports.

A few years ago, the British Heart Foundation tried to appeal to our desire to be healthier with a poster campaign. 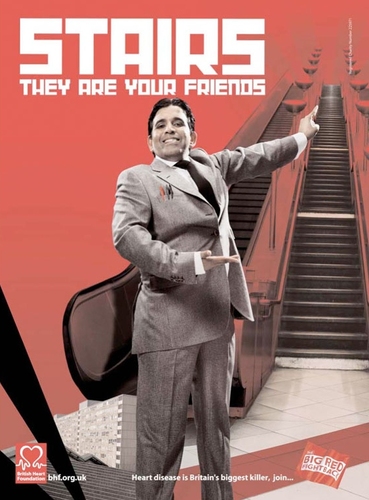 And I once stayed at a hotel in Manchester where, at the foot of every stairwell and on every landing, they had a chart produced by the local Health Authority that told you how many calories you'd burn if you walked, walked briskly, or ran up each flight of stairs. As an incentive, it's pretty good although, speaking to the hotel staff, they told me that the stairs only got busy in January and September. Yup - New Year resolutions and excess holiday baggage removal.

If you want people to change their behaviour, incentive is powerful. And there's no better incentive than reward. But it needn't be money or gifts or the possibility of better health. Fun is a great reward.

The Fun Theory is an incentive run by the Volkswagen Company and it aims to promote worthy changes in behaviour by using fun. I first came across their work when I heard about the World's Deepest Bin; a litter bin that plays the sound of something falling a great height before crashing to the ground whenever you use it. Kids have been seen gathering up litter - usually discarded water bottles - just to hear it work. You can see a video of it here.

One of their latest creations is the Piano Staircase. Overnight, a team transformed the stairs leading out of the Odenplan subway in Stockholm, Sweden, into a giant functioning piano keyboard - much like the piano made famous in the Tom Hanks movie Big. Applying pressure on each step played a musical note. Commuters soon opted for the intriguing new stairway and enjoyed making musical movements as they ascended up and down the scale.

The Fun Theory found that 66% more people than normal chose the musical stairs over the escalator. 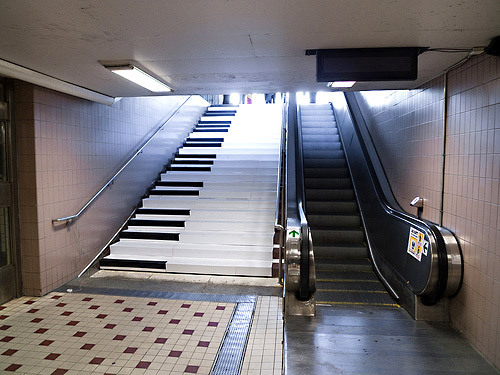 You can see the staircase in action here and on the video at the top of this shedpost. And students at John Hopkins University in Baltimore, Maryland, did the same thing. You can see their results here.

Of course, the fastest way downstairs is to replace it with a slide. They did that too. Look (and they do it in Munich University too)!

For health, take the stairs UP and the lift DOWN. Going up is good exercise, and if you slip, you're unlikely to do more than graze you knee (and your pride). Walking down stairs doesn't do much fo the heart, and if you slip you can be badly injured. Nobody ever broke their neck falling up stairs!