I spent some time yesterday with a chap you may or may not have heard of. His name is Stephen J Dubner and, well, I'm a bit of a fan boy. You see, Dubner is one half of the writing partnership - with Steven D Levitt - of the hugely popular and groundbreaking Freakonomics books. 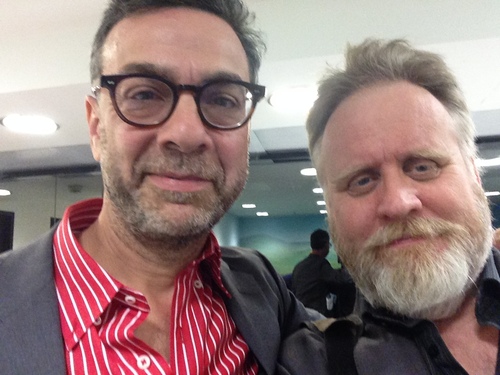 Their partnership began when Dubner, a New York journalist, went to Chicago to write about award-winning economist Steven D Levitt for The New York Times Magazine. Dubner had been reluctant to take the assignment (he was in the middle of writing a book about the psychology of money). Levitt was reluctant to be shadowed by a journalist (but his mother loved the Times Magazine, so he gave in). The article came out, and led to an unexpected partnership. Levitt and Dubner wrote Freakonomics, a book about cheating teachers, bizarre baby names, self-dealing estate agents, and crack-selling mama’s boys. They figured it would sell about 80 copies. Instead, it took up long-term residency on the Times best-seller list, and went on to sell more than 5 million copies in 35 languages. Then they wrote SuperFreakonomics. It too became a worldwide best-seller. Together, the books have sold 7 million copies worldwide. A lot of other stuff happened, too. A blog. A documentary film. A radio show. Not bad for a partnership born of such profound reluctance. In 2014, Levitt and Dubner published their third book, Think Like a Freak  – a blueprint for an entirely new way to solve problems. And just recently, they've published How to Rob a Bank - a selection of the best blog posts from the past 10 years.

When I was a cop, trying to muddle my way through piles of academic papers and business books and trying to find a way to apply psychology and behavioural economics to crime and disorder, Dubner and Levitt's arrival was like the light at the end of the tunnel. Freakonomics had a profound effect on me. Here were two guys thinking the same way as I did, albeit on a larger scale and with grander themes. The book went everywhere with me.

So having the opportunity to spend several hours with Stephen yesterday, to swap stories and experiences, was a complete joy.

They say you shouldn't meet your heroes.

I'm lucky enough to have met most of mine. And I'm so pleased I have.

Some content taken from the Freakonomics website. And do check out Stephen's weekly radio show - it's the best podcast online in my opinion.

Who are your other heroes? Ones you have met and those you haven't... yet?!

Ooh! Interesting question! I've met many famous people (and nicked a few!) in my various careers as a chef, cop and writer including most of the royals, four prime ministers, two US presidents, a pope and any number of actors, artists, comedians, writers and rock stars. And, of course, I now work with some of the UK's most talented comedians on 'QI' and, thanks to working on 'The Museum of Curiosity', I've met Nobel laureates, award-winning authors, scientists, poets and amazing magicians (and much more).

I'm lucky that I've met many people who fit into my 'hero' category although some of them, sadly, are no longer with us like Douglas Adams, Willy Rushton, Terry Pratchett, Kenneth Williams, Ronnie Barker, Eric Sykes and Freddie Mercury.

Meeting Buzz Aldrin was a thrill as was meeting several of the Pythons. Also, I got to hang out with Carrie Fisher last Christmas and she's a complete delight.

But there are many more people I never got to meet and I so wish I'd had the opportunity to do so; people like Laurel and Hardy, Kenny Everett, Peter Sellers, Spike Milligan, Tom Sharpe, P G Wodehouse, Roald Dahl, W Heath Robinson, Terry-Thomas and most of the cast of 'Dad's Army'.

As for the question of 'never meet your heroes', there is one name that dominates. Rolf Harris. He was always a hero of mine. He was an amazing artist and a great teacher. He kind of invented world music. He was extraordinary and inspirational and I met him several times. However, his contemptible behaviour with under-aged girls disgusts me to the core and I feel completely and utterly let down by him. He is a hero no more.