Yesterday I had a discussion with an old friend - an analyst - about the problems of 'garbage in garbage out'; that if you provide duff information, don't expect to get back good analysis and useful recommendations. I'm currently writing the very last chapter of the book and the subject is evaluation. It's kind of hard to make such dry subjects as monitoring, assessement and review interesting, but there are always stories that can help. Like this one:

In 1999, the Mars Climate Orbiter spacecraft catastrophically crashed into the planet it was supposed to orbit. A navigation error arose because the people who had built the ship’s thrusters had set them to receive instructions in Metric Newtons while the onboard computer was programmed to send information to the thrusters in Imperial Pounds. This meant that the thrusters misfired by a factor of 4.45% causing the plunge into the Martian atmosphere. 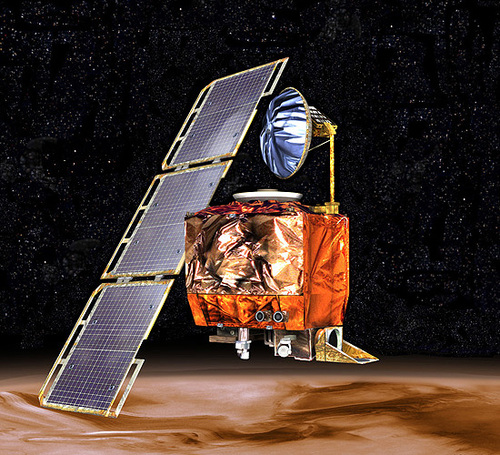 During the probe’s 12 month flight, there were several indications that things weren’t quite right but they were ignored or missed. The cost of not checking and re-checking the veracity of the data coming in from the spacecraft was total loss; an expensive mistake at $327.6 million.

Which reminds me of a gag by Scottish stand-up Frankie Boyle who, in 2004 and after the ill-fated Beagle 2 probe failed to respond on landing, said: ‘See that Mars probe that successfully crash-landed on Mars? To me it’s not successful if it’s crashed. That’s a bit like saying that you’ve swum the channel because your corpse gets washed up on a beach.’

The problem is made worse when the flaky information gets into a feedback loop that gives a false impression of trustworthiness. As always, I have an example... :)

After a swift double-take I checked the reference and realised it was an earlier publication by the same group. Seven self-referrals later I arrived at one original piece of that had been folded into a larger publication by this group. After checking the notes I realised we were dealing with a sample size of under 30 for that report, and it's not unreasonable that just one cheeky kiddie would have thrown that in as a joke.

The problem is that the website named sounded quite similar to a massive video sharing site that IS popular with children and nobody thought to check it over the six years between the first and last reports where it was mentioned. This particular group appear to make themselves seem more prolific by rehashing their own reports, so they'd created a number of sources all with this rogue reference and the claim that all children across Europe used the site regularly :)