10 Books every Problem Solver should read

This grew out of a discussion I had with some QI and Museum of Curiosity colleagues and fans after recording the first episode of series 8 of Museum with Holly Walsh, Dr David Bramwell and Stephen J Dubner on Sunday night.

These are the 10 books (among many) that have had the biggest impact on me and the work I did as a problem solver. This list is by no means exhaustive - the bibliography for Why did the Policeman cross the Road? features over 300 books. But these 10 are the stars: 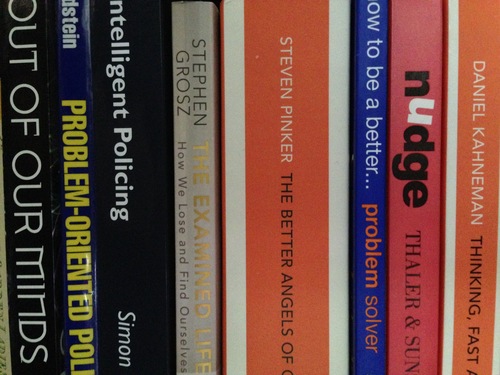 Thinking, Fast and Slow by Daniel Kahneman. The bible for understanding how humans make decisions. By the man who pretty much invented behavioural economics.

Freakonomics by Stephen J Dubner and Steven D Levitt. Genius from start to finish, as are Dubner and Levitt's other three books. This book validated everything I was doing in the Problem Solving Unit. If I ever write a book half as good I'll die happy.

The Better Angels of our Nature by Stephen Pinker. The world is the safest it's ever been and yet we're living in an age of neurosis and worry. Pinker's big, fat, magnificent book is a celebration of how good things are compared to how they were.

Nudge by Richard H Thaler and Cass R Sunstein. The seminal book about how little suggestions can result in big, positive changes.

Drunk Tank Pink by Adam Alter. This is a book about perception and subconscious cues that most of us are completely unaware of. Fascinating.

Watching the English by Kate Fox. If you want to understand the difference between us Brits and the rest of the world, this is the book for you. Written as if we're being studied by an outsider.

Moral Tribes by Joshua Greene. Just very very eye-opening and enlightening. A clever series of allegorical stories that explain how society works for the better and for the worse.

The Drunkard's Walk by Leonard Mlodinaw. A book about randomness and uncertainty and how accepting this and working with it is immensely powerful.

Out of our Minds by Ken Robinson. Just the best book on smart thinking I've ever read.

Problem-Oriented Policing by Herman Goldstein. The book that started it all. Possibly too police-centric for most readers, it nevertheless proved to me that there was a smarter way to do policing.

There are so many more! But there's your starter for/of Ten.

I am so disappointed *sadface*

In this digital age, I had been expecting to see links to each book...

yes we need links because copy and pasting into Google or Amazon is ... like ... 5 mouse clicks ... LMGTFY!

I'm so embarrassed *flushed face*. I just had to Google LMGTFY.

I always worry about links because I'm a big lover of books and bookshops and a tiny part of me believes that every link to Amazon etc. is killing another shop sale. Sad face.

It is bizarre, but through unbound (a website) I rediscovered my love of physical books....