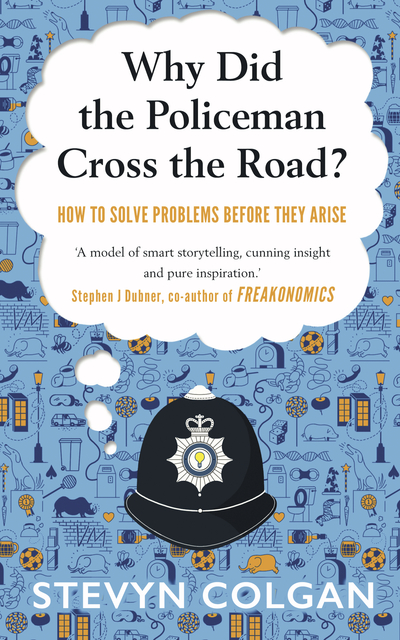 Business
You made Why Did The Policeman Cross the Road? a reality. It's available in all good book stores now.
$8
161 pledges

Two invites to the launch party in London, a signed 1st edition hardback and the ebook edition
$600  + shipping
1 pledge

Talk from the Author

How did a teenage wizard foil teams of illegal street gamblers?

How do smokers help prevent your car being broken into?

What do sex workers and tiger farms have in common?

Why do bees make the best sheepdogs for elephants?

And how do the phantom bus stops of Dusseldorf keep vulnerable old people safe?

What links these seemingly unconnected questions is good problem-solving.

Stevyn Colgan is an author, artist and popular public speaker. He’s one of the writers of the hugely successful BBC TV series QI andThe Museum of Curiosity. But, in a previous career, he spent 30 years as a police officer in London during which he became involved in a small but potent revolution. He and some of his colleagues realised that there was a smarter way to tackle crime and public concerns that didn’t always mean clogging the judicial system with copious arrests or flooding the streets with extra cops. This new style of intelligent problem-solving policing took the cleverest ideas from academic research, military strategy, business, marketing, public health and many other areas of work, mixed them all up with a good dollop of original thinking and solved problems that had previously been labelled as unsolvable.

In this remarkable book, he tells the story of his work in Scotland Yard’s innovative Problem Solving Unit and how the team tackled some of London’s most persistent problems. Along the way, you’ll find out how dog shows stopped young men killing each other, how lollipops prevented night club closures, how wheelie bins worked in cahoots with burglars, and why celebrities should be covered in chewing gum. You’ll also discover how bird tables can prevent car crashes, how fake vomit can clean up the streets, and why sitting down in Japan may just result in a sore bottom.

Why did the Policeman Cross the Road? is a celebration of original thinking, peppered with fascinating research and entertaining stories in the tradition of books such as Levitt and Dubner’s Freakonomics, Malcolm Gladwell’s The Tipping Point and Leonard Mlodinow’s The Drunkard’s Walk.

And it’s more than possible that the book contains some little tool or technique that could help you solve some of the problems in your own life.