Which king or queen would Shakespeare have written about?

Charles I had his head chopped off. George III went mad. Edward VIII giving it all up for love. Shakespeare might have been drawn to any of their stories. 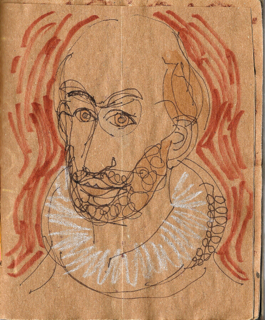 What's Shakespeare got to do with it? Well, I've always been nuts about Shakespeare. My father (an actor) had us learning soliloquys from about six years old. At university, my MA was on Shakespeare And His Influence. And not long after graduating, I was telling an old school-friend - an up-and-coming Hollywood scriptwriter - that my favourite play, if I absolutely had to choose just one, is Henry IV Part 1. Brilliant Shakespearean dialogue, obviously, and an almost perfect balance of serious and funny.

He nodded sagely and asked me the question in the title of this blog post.

For a little while, I thought the answer should be James II, whose father had his head chopped off (see above); who returned to England with his elder brother, Charles II, on the restoration of the monarchy; and who, not long after his own accession, fled the country out of fear that anti-Catholic mobs might have his head off too.

James took his baby son with him, and his second wife, to a life of exile in France. From there, he cursed his daughters - Protestants, from his first marriage - who took the throne from him.

One of them was Anne.

Having betrayed her father, and received his curse, Anne went on to lose all 17 of her children. (Seventeen!) I realised that I had found a better answer to my friend's question about Shakespeare. And I decided to write a novel about her.

(credit: Drawing of Shakespeare, on brown paper bag, by me.)