What IS betrayal - and how long does the pain last?

This week, I hit the 45% mark - thank you! - and met Dr Brennan Jacoby, near the Soho offices of Unbound, to talk about BETRAYAL. 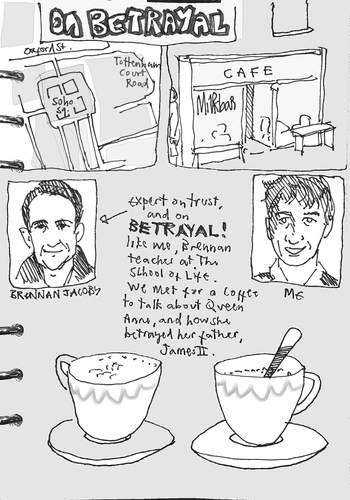 I wanted to talk about Queen Anne's betrayal of her father. But we ended up talking about betrayal more generally - in a conversation that ranged around whistleblowers, adulterous golfers, and the football match, nearly 40 years ago, in which Denis Law, for Manchester City, scored against his old team Manchester Utd - sending United into relegation and setting up Law for a lifetime of remorse.

"What makes something a betrayal?" I asked Brennan, who like me teaches at The School of Life. "Can it be identified objectively, or is it always a matter of opinion?" I had a hunch: "Are we betrayed only when we DECIDE we have been betrayed?"

Brennan didn't look entirely convinced. "Betrayal involves breaking expectations and normative behaviours," he said. "Let's say we're friends." He paused. "I like to think we ARE friends! And imagine that, despite being your friend, I go out and tell people all your secrets."

Right, Brennan said. But Anne's case was different. We know that James II felt betrayed by her, because he cursed her after fleeing the country with his (second) wife and baby son, Anne's Catholic half-brother.

But to use the word betrayal becomes more difficult once you discover why traitors behave the way they do. They always have a reason, and sometimes it will be more than narrowly selfish. "Suppose a whistle-blower in a hospital 'betrayed' his employer, and the people he worked with," says Brennan. "If it's for the sake of the patients, there's a higher cause. It's excusable."

Did Anne have a higher cause? People at the time believed that she protected Britain from the menace of Rome. (Catholics, obviously, had a different take on it.) But was that really what motivated her, or did she just want to be Queen? Who knows.

One thing is clear. The person who feels betrayed can overcome that: much later, perhaps moved by the loss of all Anne's children, James wrote to forgive her.

But despite being forgiven, the "traitor" may continue to be haunted by what was done. Forty years after scoring against Manchester United, Denis Law still feels the pain of scoring against his old team. "I was inconsolable," he said recently. "I didn't want it to happen. How long did the feeling last? How long ago was it? There is your answer."

And Anne, whose betrayal was so much more personal, struggled till the end of her life to find a way to make it good. Attempting to put myself in her shoes, I can think without a moment's difficulty of times when I've let down people who matter to me, for reasons that seemed valid at the time, but which they might have felt as betrayal - and for which I now feel remorse.

In some instances, I might be able to make amends. But what if I can't? What can I do about my remorse - and what might Queen Anne have done with hers, towards the end of her life - when reconciliation is impossible? If you have any thoughts, please leave a comment below.

Betrayal, forgiveness, feeling hounded by feelings of guilt and shame or the frustration of being misunderstood - I love this stuff JP. I'm interested in the connection between forgiveness and self awareness and the fact that we are all beautifully/horribly flawed. Please write more on these topics - there is lots to learn and experiment with!

Thank you so much Abigail - I shall. And please forgive me (see what I did there) for not answering this till now. I was basking in a lack of awareness that you had commented. I'll ask my friends at Unbound if there's something they can do to make the software notify me when I get comments. I love comments!
Lots to learn, as you say...