If you thought this post was about me - for years a feature writer on The Sunday Times and the Financial Times - shame on you! It's about Daniel Defoe, the leading character in my novel, What If The Queen Should Die? 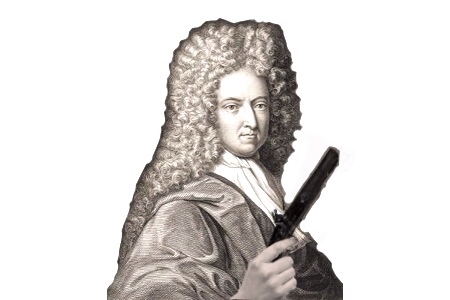 He's best known today as the author of Robinson Crusoe, but Defoe did a lot of other things before that. He set up his own newspaper, and wrote most of it himself - covering a huge range of topics, over the years, and promoting the cause of non-conformists at a time of great persecution from the official Church of England.

More than a writer, he was a man of action. He's widely believed to have  taken part, as a young man, in the Monmouth rebellion against James II - a treasonable act for which many other rebels were tortured and executed.  Under Queen Anne , Defoe worked as a spy and propagandist for her chief minister, the Earl of Oxford; he was heavily involved in laying the groundwork for the Act of Union (to Scotland's disadvantage) .

Defoe's propaganda was not always successful. Outraged by the persecution of fellow non-conformists, he wrote a satirical pamphlet suggesting that the best thing to do with them was to put them to death. The authorities refused to recognise this as satire: he was prosecuted for suggesting such an outrage, and put into the stocks.

Nor was he entirely successful as a merchant, importing (among other things) tobacco, beer, wine, silks, muslins, cochineal, wax, dates, tea and ostrich feathers. Experiencing problems with cash-flow, he was thrown in prison - and only sprung out of there because Oxford needed his services... And to find out what happened next, you'll have to read the book!

(credit: portrait of Defoe includes my own hand, and was doctored using ArtStudio app on my iPhone)