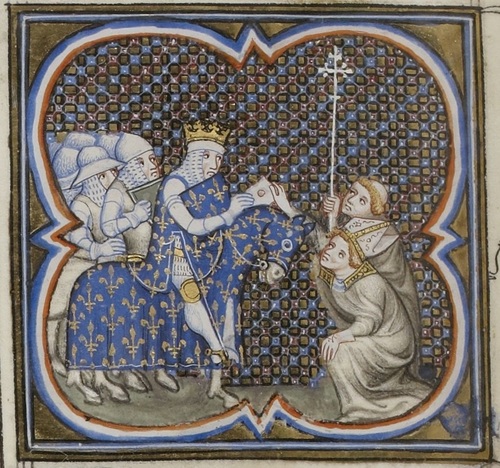 The recent death of Her Majesty Queen Elizabeth II and the proclamation of Charles III as her successor highlighted that to become monarch is accidental but to act as monarch requires dedication to service.

The pronouncements made by both Elizabeth (during her lifetime) and Charles have never ignored these key facts; they are fundamental to their position and rest in the distant past when monarchs, ultimately, were rulers by the Grace of God.

Yet rulers in the past could have their heads turned by narcissism, greed and cruelty. Many Middle English poems and romances acted as specula principum – mirrors for princes. They reflect on the need for good governance and good government. They are highly relevant today.

Sir Gawain and the Green Knight addresses key issues of vanity and overweening pride (what it calls surquedry). King Arthur’s Death reveals the consequence of sacrificing everything and losing it all for the sake of dogma.

In other texts, such as Mum and Soothsegger, we meet shadowy Bristolians and others during the dark and uncertain times surrounding the end of the reign of Richard II and the beginning of the reign of Henry IV. In Sir Degrevant we see the old order being challenged by a new class of commercial landowning knights keen to exploit to their advantage new laws.

In William and the Werewolf (c. 1350), we meet a gentler narrative but one which nonetheless speaks the same language. It talks of the need for good rulers and calls for them to watch over the needs of all their people.

The romance, translated from Old French into Middle English apparently for the enjoyment of the distant estate workers of a disabled Humphrey de Bohun, is like a voice calling from the wilderness of an England in transition.

Its language may be gentle but its message is profound: the right to lordly power depends on those who sit below. It is crucial for lords and ladies to listen to their advisers and make fairer, workable decisions for those less fortunate than themselves.

Governmental legitimacy and the importance of compassion

The romance's rich array of characters from all levels of society remind us that good governance is about helping the people who make the land, not the people who own the land. It is about caring for all those who make society, who make it what it is and enable it to function.

Its message of legitimacy is more than just about lords holding power but about power being used with compassion.

In the shadow of the funeral of Queen Elizabeth, the land is once again in the grip of sinister unseen forces keen to exploit power to extend their wealth while casting many into hardship disguised by vacuous words. Advice is once again ignored as dogma pushes on. Words are now spoken with no hint of compassion or empathy but are read out as if by autocue.

Today's faceless and faithless rulers should reflect upon the spirit of duty their position demands, and discover a spiritual compass to enable a fairer, better and more just society than one fit for exploitation. They should read William and the Werewolf and learn to rule with honesty and not hide behind false lies.

Please help this book become reality to enable its message of compassion to be heard again.

PS - if you have not yet done so and would like to be a named patron of my new translation of William and the Werewolf, with your name published in the back, please do so here.