Longthorpe Tower and how mediaeval audiences saw their world 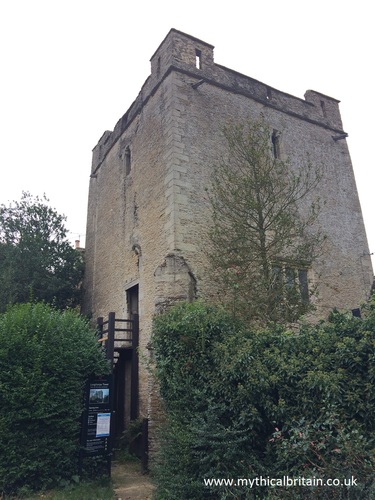 In an earlier update for William and the Werewolf, I discussed different environments for audiences of mediaeval romances. Last week, I managed at the third attempt to visit Longthorpe Tower near Peterborough, Cambridgeshire, a fourteenth century tower erected alongside the family hall by Robert Thorpe, a professional lawyer who, amongst other things, was regularly working on behalf of Peterborough Abbey.

Longthorpe tower in many ways represents the apogee of living for a mediaeval professional; an aspirational structure akin almost to a private castle and certainly a status symbol among his peers and, indeed, in the landscape. The tower in itself is unremarkable as far as castles and military structures are concerned but as a domestic structure it is a statement par excellence; in particular when it is considered for its purpose.

Adjoining the main residence, the tower was originally entered only via the house (the current first floor entrance is a much later addition) and, on doing so, presented a feast for the eyes of those fortunate enough to be welcomed within it. A vaulted chamber with the luxury of windows, it also featured plastered walls intended from the beginning to be a canvas for a vibrant display of wall paintings.

This was a private chamber - a solar - but also a chamber of demonstration: of power, of taste, and as an indication of the educational and professional achievements of Robert Thorpe himself. Warmed by its own fireplace, this chamber would have been aglow with the sort of imagery Robert's peers would have understood and been impressed by. 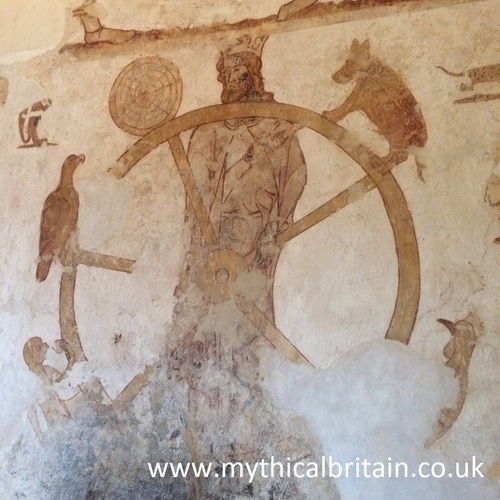 On one wall, we see a dramatic image of the wheel of the five senses in which humanity's crowning glory is shown as "reason" able to bring together the five senses of sight (a boar), touch (a cobweb), smell (a hawk), hearing (a cockerel) and taste (a monkey). As a lawyer, Robert Thorpe himself would have had to apply reason to many of his own decisions based upon the merits of each case he considered. 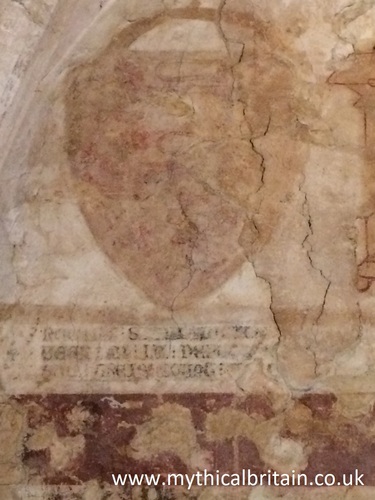 Elsewhere, on the tower's south wall, is a painted evocation of a tapestry, two seated monarchs and two shields (one shown above with the edge of the tapestry below it). Much faded and damaged, these are thought to represent Edward II (possibly Edward III) and Edmund of Woodstock (who died ca.1330). It is likely that Robert himself would have sat below the wall in his own chair, the imagery asserting his own local power and support from those higher in society than himself. 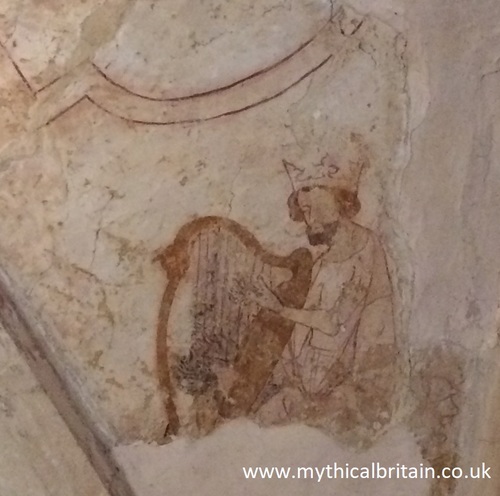 Educative messages abound. On the ceiling - a form of musical heaven - we observe numerous musicans including David with his harp, while others play instruments such as the pan pipes and a viol. On another wall, we see the outlines of a (possibly unfinished) "tapestry" which has been interpreted as Aristotle teaching Alexander the Great (shown ins a later manuscript image below). 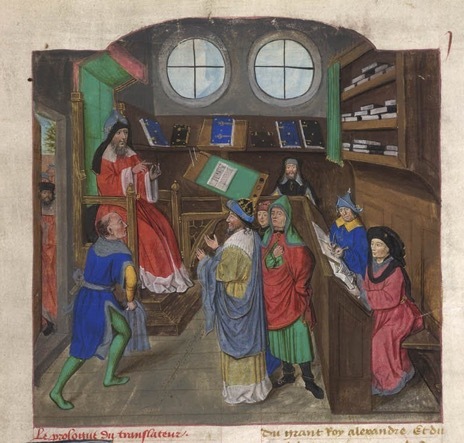 Above this is depicted a scene from the life of St Anthony in which he stands next to an angel showing weaving a basket. Behind him, in an apparently inferior painted hand, are rabbits and birds while above them all was originally a depiction of the seasons, now largely missing apart from the first four months of the year. In my photograph below you can just see (top left) the serf digging the land with his shovel, representing March. 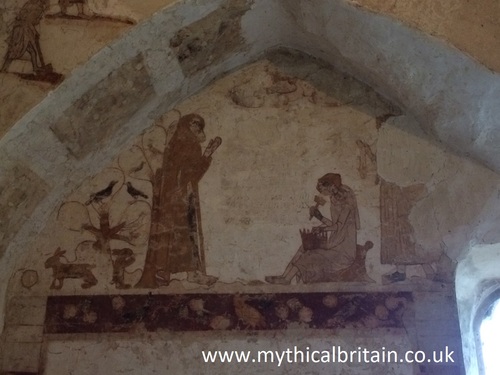 Perhaps the most evocative of all the wall paintings are those on the north wall in which Mary is shown with the baby Christ while Joseph sits opposite her (although he is largely erased due to damage in the wall). Above this we are shown the Ages of Man, from youth (left) through to decrepitude (right); the visitor is compelled to reflect upon their own brief presence on earth and the fundamental nature of God's power. 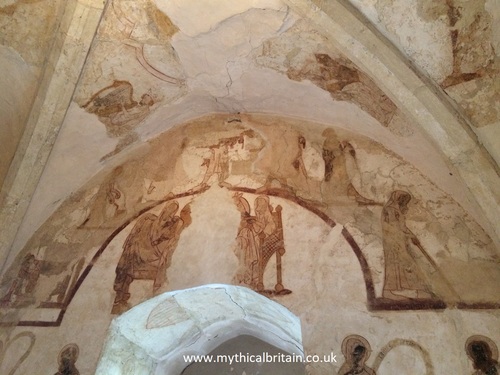 This combination of educative, secular and religious themes is an astonishing feast for the eyese but of course would have been more so when originally painted in vibrant colours. Yet not is all instructional; around us we are constantly aware of life in the Fens over 600 years ago. The wildlife of the area is finely celebrated - no doubt to show the abundance of God's bounty - and the eye is particularly drawn to the numerous birds the artist(s) depicted and which in those days would have been an omnipresent sight in these marshy, windswept lands. 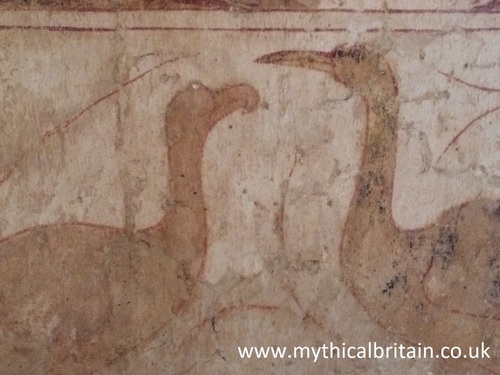 The signficance of the imagery at Longthorpe cannot be understated. A fundamental blend of the secular and the religious, a celebration of society and of place, they represent an astonishing survival (and one which was only uncovered and assessed properly in the post war years). Little wonder they are seen as the foremost example of mediaeval secular wall paintings in the whole of northern Europe.

But to us, as readers of mediaeval romances, they add an extra level to our understanding of the intellectual life of those who lived six centuries ago. These images are not only statements intended to impress but - by dint of them being understood as visual statements - are indicative of commonly-held knowledge rather than random statements of bombastic grandiloquence.

It is fascinating to consider that such artistry was not as unusual as this unique survival might suggest. In the mediaeval romance, Sir Degrevant, a chamber of equal magnficence is described in great depth; much of which is similar to that depicted at Longthorpe - especially the apostles and philosophers.

In imagining the world of William and the Werewolf, therefore, it is important to see a mediaeval romance as a literary depiction of a world alive with imagery. The mediaeval world, far from being the miserable and misty world of we might imagine from films and documentaries, was - in the mind at least - a vibrant place, alive with mystery, magic and no small amount of wonder.

PS. NEWS! I have recently released some original illustrations for William and the Werewolf as pledge options for supporters. These include scenes such as the creation of the werewolf, William's life in the forest and the moment in the romance when William and Melior escape Rome disgused as bears. There are five each of these signed, original prints available so if you would like one - perhaps upgrading your pledge to do so - please do so. Every pledge will help make this magical story come alive once more. A story which might once have been heard in a place such as Longthorpe.

PPS - I've been told by Unbound that any pledges up to £100 using the code SPOOKY13 will also benefit from a 13% saving if you pledge before midnight on 31st October 2021. So - if you'd like to upgrade your pledge, you can do so AND benefit too. 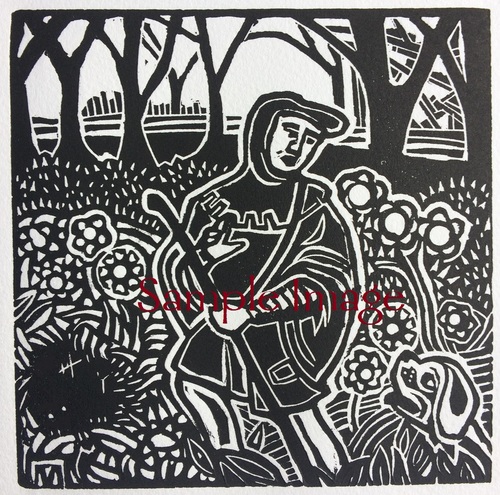 (Above: one of the illustrations for the book now available as a pledge option)