Is there really life after death? Austin Friars in London reveals some secrets 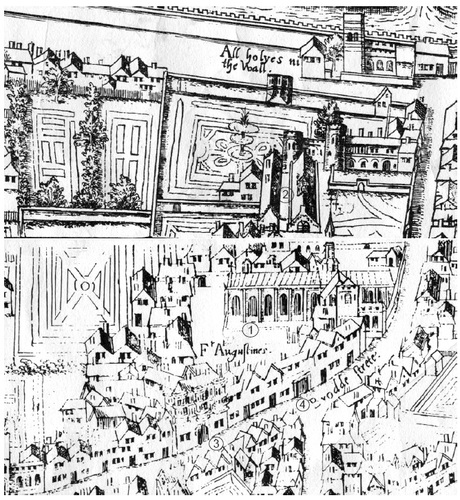 If you walk from Liverpool Street Station in London towards St Paul's Cathedral along Old Broad Street you might, in one unthinking moment, blink and miss a curious little alleyway on your right hand side. At the corner where the pedestrian turns into Throgmorton Street is Austin Friars; the unprepossessing entrance to a part of London now long forgotten.

Here is a place where centuries ago many of England's rich and famous were interred; the site of a friary which once, within its walled presincts, enclosed a private and secluded area of around 5 acres. 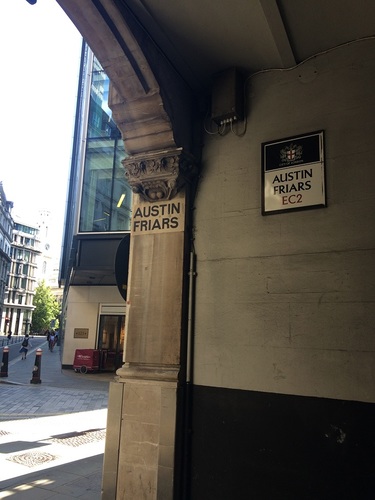 (Above: the entrance today to Austin Friars in the City)

The Austin - or Augustinian - Friars were a mendicant order of friars who first appeared in England at Clare, in Suffolk around 1249. Although the Tudor historian John Stow cites the founding of London's Austin Friars as 1253, the first definite mention of them is in 1271.

Stow also tells us that the friary was founded by Humphrey de Bohun Second Earl of Hereford and Essex and Constable of England; modern scholars believe the date to have been ca. 1265, when he was the royalist keeper of the City of London.

A century later, in 1361, Humphrey the Sixth Earl asked in his will to be interred here; it is this Humphrey, to whom the Middle English William and the Werewolf is decdicated, who is of particular interest to us.  His will, dense with bequests for masses to be sung in his memory, shows Humphrey's deep personal piety and a sense of the purer faith to which he felt drawn. 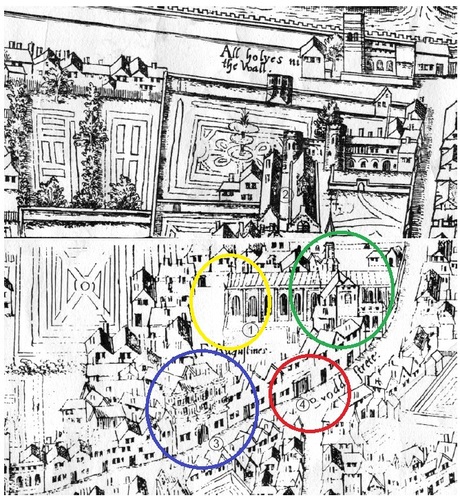 (Above: key elements of the friary: the current entrance is shown circled red; original church in green; Cromwell's house in blue; area occupied by Dutch Church shown in yellow)

A site of dedication

Humphrey, an invalid and unable to have children himself, was desperate to ensure his memory and that of his family was preserved - and that his soul was saved. Hence, he requested masses be sung in his name not only at Austin Friars but also other sites around England.

Humphrey's executor, William de Monklane, was himself an Augustinian. He was specifically chosen to ensure not only that the will was carried out but also that it was to be done to the very essence of how Humphrey wished to be remembered.

Through these acts, through the de Bohun manuscripts, or through William and the Werewolf (William of Palerne), Humphrey hoped to be remembered long after his death. It is possible the spire of the main church, added in 1362 and noted as a distinctive landmark when later referred to by Stow, was also built with funds received from Humphrey's will. 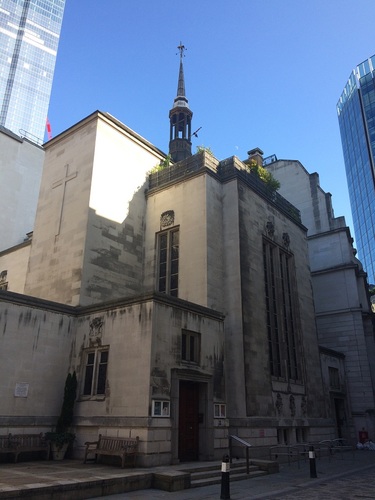 (Above: what is now known as the Dutch Church, itself bombed in the Blitz, is all that remains on the site today)

Humphrey was not alone in seeking to be interred at Austin Friars. In the 14th Century, the friary church also saw the burial of many powerful figures including Edward of Angouleme, the son of the Black Prince. A century later, the remains of John de Vere, 12th Earl of Oxford, who suffered a gruesome and emasculating execution following a conviction of high treason, were interred here in 1462. A herald in the early 16th century was to record some 88 notables buried in 77 tombs on the site. 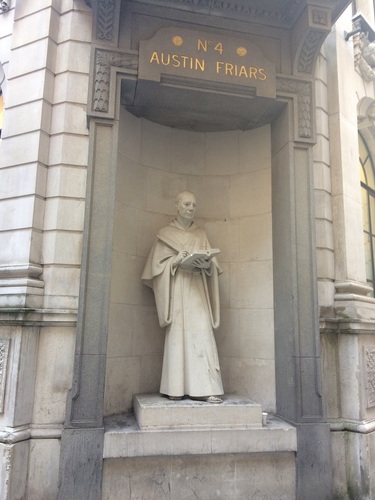 However, the permanence sought by Humphrey and others was not to be; the vain hope that the present would remain the future preserved through eternity by the power of the friars was not to be reality.

Less than a century after the death of de Vere, in 1538, the friary was dissolved on the orders of Thomas Cromwell, who also lived here (circled blue in the map above).Over the centuries, the original grounds of the friary were parcelled up and sold off to such an extent that little now remains.

From Friary to Dutch Church

It later became the first official nonconformist chapel in England, serving a Frisian congregation whose use lead to it being known by its current name the "Dutch Church"; Dutch is still the language of its services. 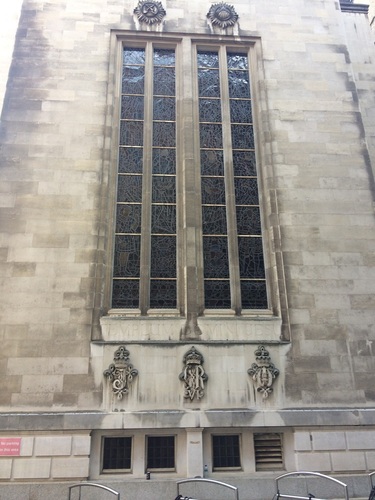 (Above: classic fifties elegance - the Dutch Church rises from the ashes once more)

In the years following the Dissolution, the rest of the church became a storehouse, its fine monuments removed and sold and the lead stripped from the roof. In 1600, the choir, tower (the very tower possibly funded by de Bohun) and transepts were demolished and what was left was destroyed by fire in 1862.

Reconstructed once more following the fire, the church was again destroyed during the Blitz; that which stands today was erected during the 1950s. The area circled yellow on the map shows the approximate site of the Dutch Church in relation to the original buildings. 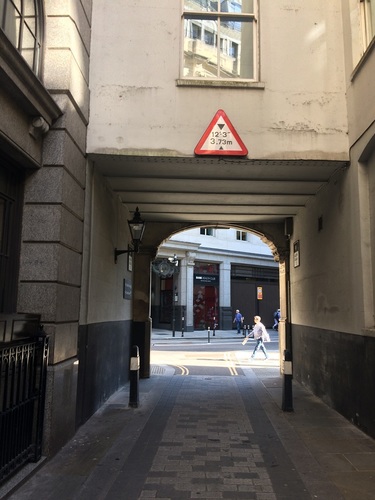 (Above: fossilised precincts: the entrance to Austin Friars still exits at the same place it did in 1265)

Astonishingly, when a Georgian house in Old Broad Street was being demolished in 1929, within its walls was found a bricked-in mediaeval gothic arch. This arch, forming part of an arcade which divided the choir of Austin Friars from the neighbouring parish church of St Peter the Poor, was the last remaining part of the original church that would have been known to Humphrey or his contemporaries.

What remains to be seen today, in the wake of centuries of destruction, reveals little of a place once held in high esteem by some of the most powerful families in the land. Yet the winding nature of the "street" of Austin Friars follows precisely the boundary of the old mediaeval cemetery. And thus it is here, in this pedestrianised alleyway in one of the greatest commercial cities in the world, if you close your eyes for a moment you might just hear the songs of the brothers calmly in your ears as they still sing on for Humphrey.

Is there life after death? In Humphrey's case, there is nothing now remaining above ground of the friary he once knew and the community here to which he was so dedicated. Fire, greed, bombs and demolition have long since superceded the dreams of the invalid Earl.

And yet, through his manuscripts, and through the gentle romance William and the Werewolf, Humphrey de Bohun, Sixth Earl of Hereford and Essex, lives on still in our minds. Six centuries on, there is life after death for the old earl of Pleshey.

PS - Keep the memory alive! If you know of a fellow mediaevalist who would like to support my translation of Humphrey de Bohun's great mediaeval romance, William and the Werewolf, please do pass on this update to them. As I write, the book is 55% funded and has still some way to go to achieve full funding so every donation is extremely welcome. Thank you.