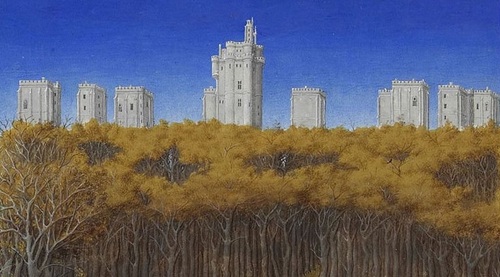 As well as being rich in chivalric exploits and common themes of quest and adventure, mediaeval romances are also defined by their setting; in particular those of castles and countries. Possibly due to its French origins and/or the presence of the Normans in Sicily, the story on which William and the Werewolf is based sets itself in the Italian peninsula, with dynastic links to Spain and to Greece – its setting is the Mediterranean. An exotic place for an English audience of the fourteenth century.

While such a setting was entirely logical perhaps for the original poet of the French Guillaume de Palerne, what could it mean for an audience one historian has stated as being based in the Gloucestershire estates of Humphrey de Bohun, patron of the Middle English redaction?

What did geography mean in general to such an English audience whose notional knowledge of the world was centred on the ever-flooding Severn and its cathedral centres of Gloucester and Tewkesbury? What imagined worlds lay beyond the seas; what castles and towns lay there?

The world according to romance

In King Arthur’s Death – the Alliterative Morte Arthure – Arthur travels across the continent of Europe in a sweeping fourteenth century nationalist assertion of English power based on Geoffrey of Monmouth’s notional British hero. Britanny, France, Germany, Italy and faraway lands, possibly drawn from the travels of the putative Sir John Mandeville, all feature in the narrative.

In the Anglo-Norman Bevis of Hampton, a popular romance whose appeal stretched into many cultures over the centuries, the eponymous hero is sold to “Saracens” by his wicked mother and spends much of his time in the Middle East while also returning twice to England via adventures in Germany and in Aumberforce, which may replicate the Seville of the original Anglo-Norman story.

Richard Coeur de Lion, however, is a much more explicit geographical romance, seemingly intent on asserting an aggressive Englishness and powering its narrative with a monstrous and violent racism as Richard’s crusaders carry all before them across Europe, Cyprus and the Middle East. 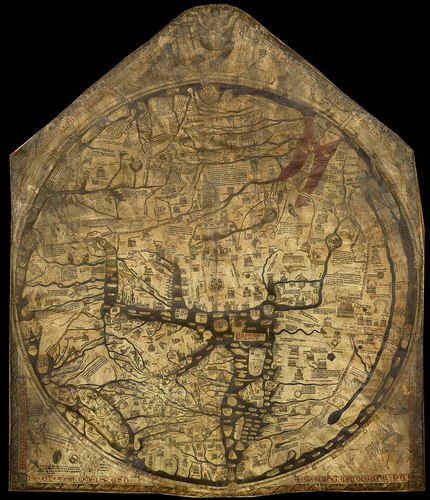 (Above: the world as they knew it - the Mappa Mundi in Hereford Cathedral)

Geography is central to the excitement and positioning of romance in the mind of the audience. The canon of Middle English romance is not a parochial offshoot, the product of an inward-looking insular population. Instead, it inherits French stories and makes them its own; it also creates its own unique characters and narratives which blossom as English in their own right. 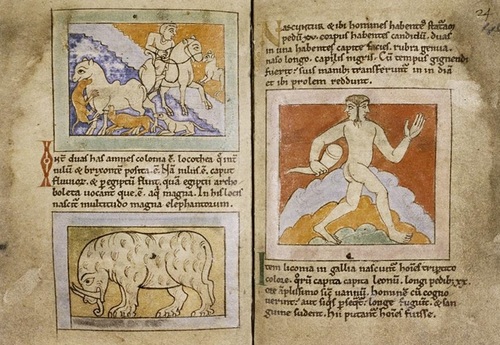 (Above: Marvels of the East - other worlds imagined in the Bodleian Library, Oxford)

Foreign lands, travel, fights with giants or support from the help of friendly werewolves was, I would suggest, as important to effective mediaeval romance as outer space, international espionage or post-war cowboy country is to the success of twentieth century cinema.

It is not necessary for an audience to know a place in order to enjoy a story; instead, romances – like film – play on a vague understanding of somewhere different to create individual imaginings in the mind of every reader and listener.

Like today, while soldiers, businesspeople and clerics get the chance to travel, many folk left behind instead get to learn of foreign places from others. If, perhaps, to travel was beyond their means, this did not mean their imaginations wished to be starved of the experience. Geography as told through romance was fundamental to mediaeval escapism, irrespective of whether a book was a read in private or performed aloud.

If lands were imagined, then so were the places within them, their towns and homestead. Thus it is that in these romances we read of castles, of towers, of palaces but rarely do we learn of what they actually look like. 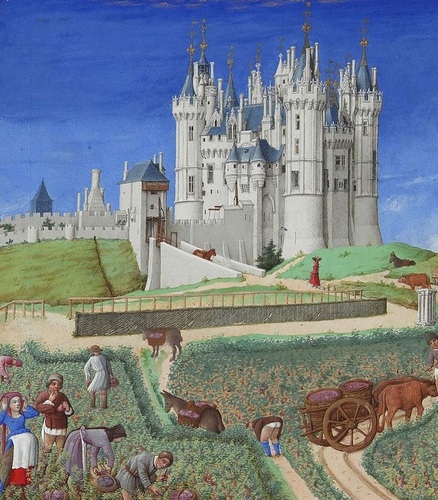 In King Arthur’s Death, Arthur circles the walls of Metz; we also read of fighting in the suburbs and of men being trapped by a drawbridge. When he arrives outside the walls of Rome, we are given no description of the Eternal City. Instead, the emphasis is on the vulnerability of walls and towers – it is their destruction which brings defeat, it matters not what they look like – that is for the mind.

Similarly, in Bevis of Hampton, we read of ladies in “a tower” but whether such towers are singular, represent a castle as a whole, or indicate a keep, is unclear. Damascus, in one redaction of the poem, is shown as having twin walls in the manner of Carcassonne or Byzantium but this is all we are told.

A comparative rarity is in Sir Gawain and the Green Knight. Here, we learn of a castle “in the latest style” but, although its imagined beauty is described – including its famous double moats - it relies on an audience understanding of what a castle is in order to be effective. This suggests that Hautdesert may actually represent a castle known to the poet and possibly a specifically-intended (and now unknown) reader. 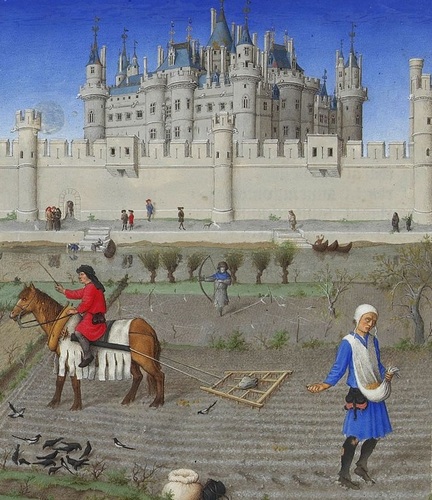 In William and the Werewolf, palaces - strongholds or places – are central to this imagined world. Although castles are given out as rewards by William when he achieves his rightful inheritance, much of the ”castle” action of the poem is set in palaces. William’s final defence of Palermo (the Palerne of the poem) asks of the audience that it imagines that the palace is in fact a richly defended citadel rather than some luxurious dwelling.

It seems that castles, like geographical settings, are deliberately evocative – and exotic. They are not unknown to the audience but instead exist as imagined places on the edge of thinking. Audiences expect them to be in romances; it is not necessary to describe them as they are emotional constructs.

No-one, after all, asks how it is that Blofeldt came to be sitting in a chair stroking a cat and dreaming of world domination nor how it is that a complete rocket launching site can be built inside an extinct volcano without major contracts being issued for the work from leading multinational corporations. Audience imagination is central - it is the possibility, not the probability, which empowers and liberates the mind.

In reading a mediaeval romance, it is a mistake to imagine that simplistic description of lands, castles and travel in general are in some way a naïve representation of reality; that Middle English romancers were poorer executors of a richer continental repository of stories where continent and countries were somehow more real. It would be foolish also to think that simplisitic or minimalist portrayals are somehow ineffective and poorly-serving canvases to a more elaborate terroir.

Instead, these abridged renderings served a much greater purpose. They prompted an audience which expected to be taken on a journey of imaginings – the wealth of which would be made in their own heads rather than be described by the poet.

Less is more, we might say; mediaeval English romances demand time to be spent on every word, each one dripping with meaning. A key, indeed, to a world unseen.

PS. Thank you for reading this update and for supporting my work. William and the Werewolf is currently 54% funded as I write so there is still much work to be done to bring this magnficent Middle English romance to a new audience with new imaginings. Please can you pass on this update to anyone you know who might like to support the book so that it can become reality? In the meantime, I am currently working on some new pledge options too so watch this space!