Home entertainment and the reading of books in the mediaeval household. 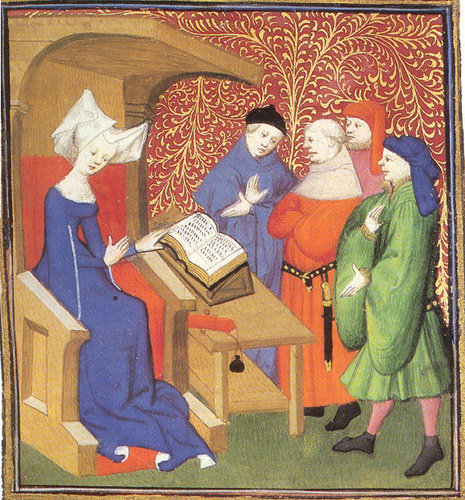 Public storytelling, alongside minstrelsy, dancing, jesting and games, formed an important part of entertainment in noble, knightly and/or merchant households in fourteenth century England. Such storytelling included readings from stories such as William and the Werewolf (William of Palerne).

Like a number of such works, it takes the form of a long poem, broken down into manageable sections to enable ease of reading, presentation and audience comprehension.

What is immediately evident from a reading of the poem is that it incorporates a “voice” in addition to the story itself; the voice of the narrator. This creates an astonishing vitality of presence: the personality of the poet, the notion of the narrator, and a sense its contemporary audience. William and the Werewolf, it seems, is a story for public enjoyment; but how can we be certain?

In addition to character of the narrator, William also includes a variety of tools in its armoury to make it relevant and hold interest for its audience. Poems of this period provide more than just a skin-deep romantic narrative; the stories themselves are rich in contemporary detail, social nuance and subversive commentary.

These elements introduce us to the poem as an item of entertainment for a mediaeval household; the equivalent of a TV show or a digital gaming/participation environment. So the role of the poem’s narrator is key to how the story flows and is enjoyed.

Through the narrator, William (transcribed from French to Middle English in c.1340-50) is given an accepted contemporary structure within which an adventure takes place. The narrator guides us via an opinion; presents coded messages to the audience and, by the reference to the mundane, usefully helps today’s reader visualise the society within which – and for whom - he was writing.

The narrator asserts control from the beginning, often drawing the reader in with a phrase which we might loosely translate as “gather round and listen all”. He places the poem within the context of authority; often referring to its source (“as the book does say”, “as is written in romance”). The narrator draws on this substance to create credibility and to distance him/herself from the message being delivered. 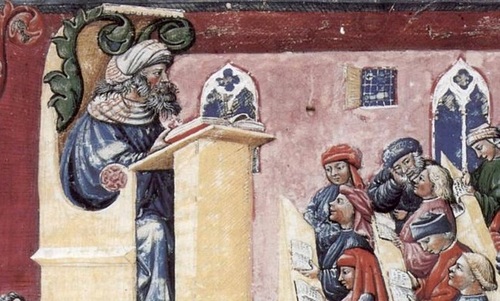 In creating this authority, the narrator gives permission to the audience to suspend disbelief and to accept the story, its context and its message. In today’s parlance, we surrender such responsibility to the book jacket, the packaging of a game or the hashtags and brand statements used in social media. We accept the positioning to determine how we wish to understand the content.

The narrator also dips in and out of our consciousness during the reading. In William, he often intervenes with phrases such as “I tell you truly” or “let us stop talking about …. And turn again to”. This is important because it reminds the audience that this is a story; the process provides convenient breaks in the narrative; and it allows an opinion to be projected which might be enjoyed within the reading environment.

By the use of such interjections, the narrator helps us understand the process of how the story was read in the fourteenth century. It does not appear that the poem was intended for private (silent) reading but that it was intended to be read aloud, either within a parlour of a large mediaeval house or possibly for larger entertainment within a hall. One surrounding is intimate and reflective; the other is grander and more public.

Depending on where in the house the story was read, the role of the narrator in drawing in the audience and the characters is key to the understanding of the entertainment. In a hall, for example, the reader – taking on the role of the narrator – can engage different members of the household in the general storytelling. In a smaller room, the nuance of the characters and how the work is received is more discreet (perhaps ideal for a more didactic work or the life of a saint). 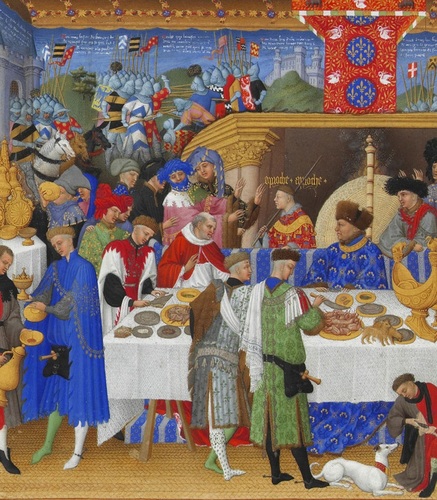 We are given some indication as to the poem’s likely consumption by references in it to its patron, Humphrey de Bohun, a leading aristocratic figure of the fourteenth century and a man known for his library of French and Latin texts. Curiously, as the manuscript to William and the Werewolf states, its scribe (also called William) is undertaking the work for those who “know no French”.

Hence, instead of being and English addition to the main part of Humphrey’s collection, the poem – perhaps – was intended to be shared on a wider basis for the enjoyment of those households on his estates. There is a suggestion, based on an interpretation of the dialect of the poem and reference within it to Gloucester, the poem was written for consumption on his lands in Gloucestershire.

Where was the book read?

In this light, we can see the poem as a poem for communal entertainment provided perhaps by an absentee landlord or by a landlord who travelled among his estates, bringing joy to his fellow lords or to their households. Certainly, it is a feature of William and the Werewolf that good lordship is repeatedly stated as being key to loyalty and the harmonious longevity of feudal lands. 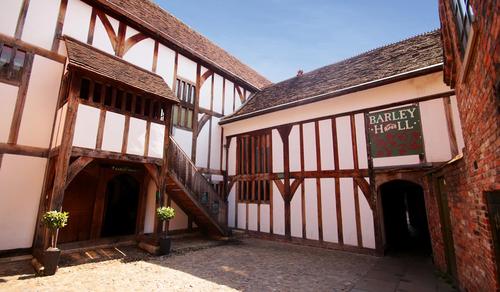 Hence, William and the Werewolf was likely to have been read within the confines of a large mediaeval domestic building, such as Barley Hall in York (above), Place House in Hertfordshire, or perhaps a hall of a small fortified manor house such as Stokesay Castle in Shropshire.

In such places, the central hall with its high table on the dais and “boards” around the outside for guests, would be a prime entertainment space for William to be performed and enjoyed.

How was the story listened to? 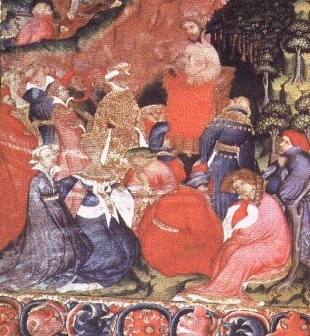 Many of the Middle English romance poems – William included – give further clues as to how the stories were delivered to their audience. Hand written and (in this case) long, the poem would be difficult to deliver within the space of one sitting.

We know from William and the Werewolf (and indeed from poems such as Sir Gawain and the Green Knight) that fesitivities in these grand halls could often last for many days and so it may well have been the case that the stories were “serialised”, for want of a better term, in their delivery.

In William’s case, this is quite likely, for the poem is clearly broken down into a number of manageable chunks for ease of navigation and, in many cases, providing logical story breaks to enable a reading to end “on a cliff-hanger”.

A book for its time

William and the Werewolf, the English telling of the French Guillaume de Palerne, is very much a book for its time: strong pace; a sense of social order; intriguing insights into people of all classes in society; and a fundamental joy and happy final resolution. It was a book to be enjoyed within a household setting and quite likely publicly within a communal setting. As well as being a fascinating mediaeval adventure romance, it is also a window on how things were done and lives were lived in England long ago.

I will be discussing many of these themes in the historical introduction to the book when it is published, in addition to a full translation of the poem - illustrated throughout -, detailed notes, a glossary and a detailed bibliography for further research. It will be a super insight into the world of courtly reading in the mid fourteenth century.

If you know of others who will be interested in this major new telling of this stunning poem, please do spread the word and ask them to support it - it can only happen with your help.

Thank you so much for supporting my work which, as I write, has now reached 100 backers!

A really fascinating explanation of the context for this story. Thank you so much for this Michael.