A new kind of chivalry - not Apocalypse Now 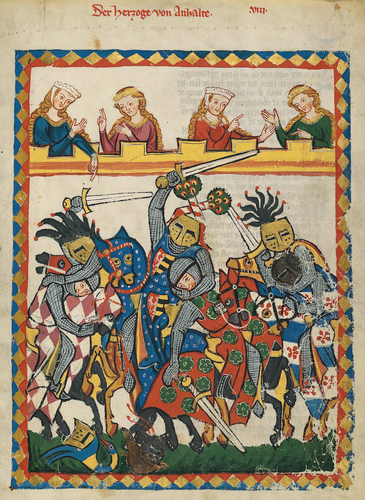 Mediaeval poets knew how to describe a good battle: lots of charging, slashing, blood and gore. The Alliterative Morte Arthure, King Arthur's Death, is one such example - perhaps taking matters to extremes at times with the nature of knightly injuries inflicted. And yet... how warfare is described may, it seems, depend on your patron. Who was the scribe writing the romance for?

In William and the Werewolf (William of Palerne) something strange happens which serves to illustrate this point head on. The battles scenes of the original French tail-rhyme romance of the early thirteenth century are transformed in the English telling. Cue a change from a relative gore fest to a much more 'chivalric', almost gentler, story: more Terence Rattigan's "let right be done" than Lt. Colonel Kilgore's "smell of napalm in the morning".

In the French original, Guillaume de Palerne, the poet writes at one point,

They draw their swords.

Then they strike each other with a single blow,

They slice their feet and then their arms,

They split their face right through to the brains.

Are spread over the meadow. 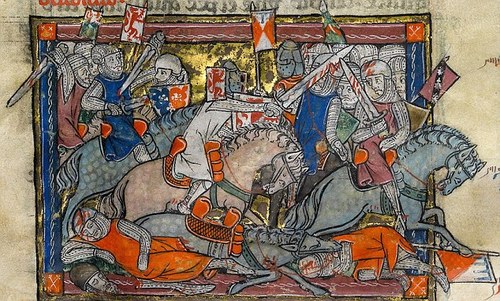 Graphic stuff indeed. Cruel deeds and crueller ends. Battle as in reality it no doubt happened. And yet in William and the Werewolf, the French poem's fourteenth century successor in Middle English alliterative metre, the poet chooses to avoid such horrors. In the same scene, in which William fights for the Roman Emperor against the Duke of Saxony, the English poet writes,

Then the battle began  most boldly indeed;

Many stunning strokes were given out sternly,

And many a bold noble was brought out of life.

The presentation is more "romantic", stating of facts yet distant from the harsh realities of the mediaeval battlefield. This approach occurs repeatedly in the romance. In the French, when William returns from the battlefield,

The sword he carries and his arm and body are

Totally tinted with the red blood

Of those he has mutilated and killed.

Whereas in the English, the evidence of warfare is subtly airbrushed by the scribe:

Where the press was most perilous, he pricked his horse foremost,

And blessed so many with his broadsword about every side

That which warrior was so  wrought he never rose after.

It is clear that battle has taken place but the graphic nature of the French original has been removed. Such technique by the poet occasionally gives rise to the criticism that William and the Werewolf is somehow an ineffective romance, one reduced almost to a stereotype of chivalry. Yet such a criticism ignores the part played in the story by the poet and the patron.

Why the gentler chivalry?

Whoever the mysterious "William" was who identifies himself as the writer (and some scholars have attempted to link him with William Langland, who is said to have written Piers Plowman), it is clear from his translation that he intends to write a gentler story. The reason for this becomes clear when we learn in the poem that it has been commissioned by Humphrey de Bohun, Sixth Earl of Hereford and Fifth Earl of Essex.

Humphrey was an invalid, a man compelled to live in the company of monks at his castle at Pleshey; a gentle soul who never married. I consider that scribe William was deeply sympathetic to whatever ailment was suffered by Humphrey. This story is rich in romance and, while still containing many of the great archetypes of chivalric glory, chooses to sanitise its content to render it acceptable to a man also known for his devout piety.

William and the Werewolf is less aggressive war story and more a therapy for a patron in deep suffering. A story for a Fisher King, no less; a romance almost heavenly.

PS. I hope you have enjoyed reading this update. My translation of this fabulous romance is currently 43% funded so if you know of anyone who would like to support it (and have their name printed in the back as a patron) please do spread the message among your friends. It can't happen otherwise - and there are some super pledge rewards for patrons too - including special mugs, prints and cards - including one or two UNIQUE ones as well! 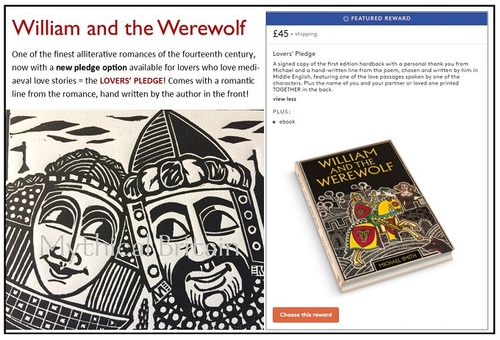 (Above: The Lovers' Pledge - one of the many pledge options available to patrons of the book)

Images used in this update show, variously, detals from the Codex Manesse (top); the Rochefoucald Grail and a detail from Perceval ou Le Conte du Graal, c.1330. Translation of the French from Sconduto: Guillaume de Palerne; English translation of William and the Werewolf taken from my forthcoming book.