A mediaeval werewolf with a difference 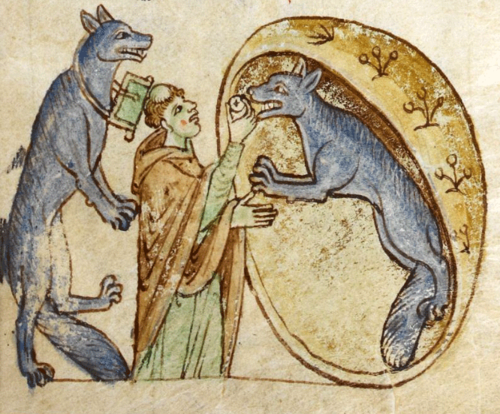 The character of the werewolf in the Middle English poem William of Palerne (the romance of William and the Werewolf) is one which, when we meet it, is not what we were expecting. A benign creature whose mission is to help others combat injustice is in remarkable contrast to the notion of the werewolf in our own minds. Why is he so different?

To consider the notion of the werewolf, it is important to consider the position of a wolf itself; a creature on the immediate edge of human society - a “beast made mundane”, whose howling in the woods can still be heard today from many towns and villages in Europe and elsewhere. There is a sense of a society beyond; creatures making themselves heard – dogs, but not quite dogs. Distant animals yet close.

Werewolves form a significant part of the mediaeval writing, whether in romances or in books of marvels. In mediaeval Ireland, a land populated with wild wolves, we read of the Fianna, bands of semi-independent warriors who became associated with the animal. It is likely that those who lived in the wilds and dressed in wolf skins came to be seen as semi-wolves themselves.

Yet transformation is also part of the story. Ireland is also home to the legendary werewolves of Ossory, associated with the stories of Laignech Faelad, who was able to transform himself into a wolf.

In her translation of a Breton lay, Marie de France describes Bisclavret, a man who without his clothes is condemned to be a wolf. When Bisclavret’s wife discovers his secret, she arranges for an admiring knight to hide her husband’s clothes. With her husband now forced to live in the wild, the lady is free to marry her new lover. The story is eventually resolved and Bisclavret returns to human form.

Sympathy for souls in exile

It can be seen from these stories, and many others, that a key theme of the werewolf, or wolf/man, is the notion of exile; a sense of living close to, but beyond the warmth of human civilisation. While some stories promote the violence of werewolves, others (such as Bisclavret and William of Palerne), invite us to feel sympathy for a wronged person.

In Bisclavret we are made to reflect on how clothes are key to the hero’s state as a person of the human world. This is developed in William and the Werewolf. The poem, written first in French (as Guillaume de Palerne) in c.1200 and then translated into English in c.1340 (as William of Palerne - or William and the Werewolf), shows equally how a man stripped of his clothes is condemned to live outside society. His return to human form at the end reveals him initially as naked before he is then bathed and ritually enrobed in the garb of knighthood to become wholly a man once more. 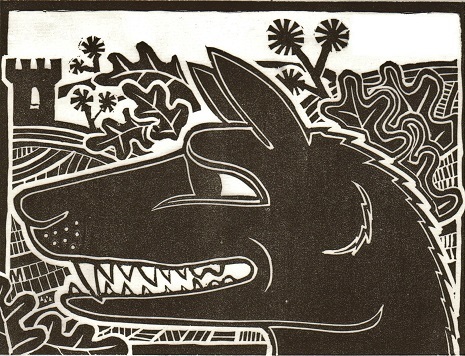 (above: original linocut of Alphonse as the werewolf - one of the many pledge options available for supporters of the book)

Where William and the Werewolf differs from Bisclavret in that a prince is turned into a beast by some form of witchcraft. In the story, prince Alphonse of Spain is magically turned into a werewolf by his jealous stepmother, intent on her own son inheriting the kingdom. Condemned to live in the wild, he goes on to rescue a child prince (William) whose jealous uncle (equally seeking possession of a kingdom) has plotted his death.

But like Bisclavret, this werewolf is also a wronged hero. It is an enchanting feature of the poem that the poet keeps us willing for the wrongs of both William and Alphonse to be righted; eventually Alphonse helps William regain his kingdom while William is able to effect Alphonse’s transformation and deliver to him his rightful inheritance.

In William and the Werewolf we meet a werewolf, Alphonse, who is less a frightening terror and more a troubled soul, condemned to live beyond royal society. Apart from his understandable anger and violence towards his stepmother, he ultimately does no harm to her or to others. He, like Robin Hood, is denied his lands and is ultimately returned to them by dint of a king; a king (William) he himself has helped to protect and bring back to his rightful place.

In Alphonse, and how he works ceaselessly to assist William in his quest, we see in ourselves that it is not appearances which matter, but what lies within our hearts. Alphonse shows us a way forwards and that right, ultimately, will be done.

William and the Werewolf is not a poem about violence and horror, it is a reflection on the good which lies within us all. I am looking forward to bringing this magnificent story to life once again and I thank you for supporting my work

PS At time of writing, William and the Werewolf is 15% funded just over a week after its launch, but there is a long way to go. Please do help spread the word about this new translation, illustrated throughout with my own linocuts. If you know of those who would like to support this project, please let them know and ask them to pledge support.

PPS - if you're reading this and have not yet pledged to support the book (and have your name in the back), you can do so here 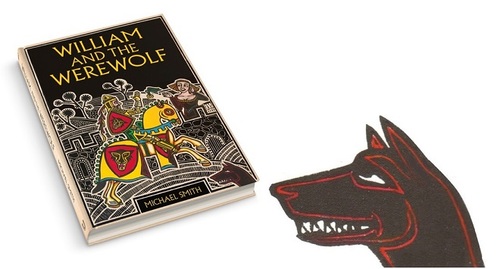