A mediaeval scribe and the secrets he reveals 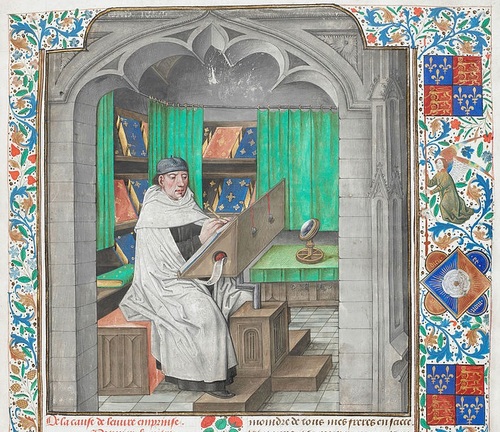 The work of mediaeval scribes was one of quiet concentration and, at times, excruciating pain and toil; their manuscripts often all we have left to tell of the dedicated, yet unsung, lives they lived. In the case of the Middle English William of Palerne (William and the Werewolf) there is only one mansucript to tell such a tale of its creator, contained today within a larger manuscript, King’s College MS 13, comprising two separate manuscripts bound at some point into one.

Like all mediaeval works of this period, it is hand-written and in this case it is written on parchment in a hand which has been dated to the later 14th Century, approximately 1375. Given that we know that its original scribe, also called William, was writing for Humphrey de Bohun at some point before the latter’s death in 1361, this suggests that the surviving work is itself taken from an earlier exemplar, now lost.

The life of William

Little is known about William himself; whether he was a member of Humphrey’s household writing to please his lord and receiving accommodation and suitable recompense in reward, or whether he was a freelance scribe.

It is interesting that the poem mirrors its 13th Century French source, Guillaume de Palerne, in naming its patron and also ascribing a distinct quality to itself by referring to that source. Even in Sir Gawain and the Green Knight we read of matters French as being seen in some way superior, as if lending an authority to the English work.

For he of Frensche þis fayre tale ferst dede translate

And God graunt him his blis þat godly so preyern!

…for the high earl of Hereford, Humphrey de Bohun,

Nephew to King Edward who lies at Gloucester.

For he first translated this fair tale from French,

For the ease of Englishmen, into English speech,

And may God grant him bliss whom we so gladly pray for!

William did not simply translate the French, however. He condensed and abridged the poem (from 9,600+ lines to c.6,000) and added distinct changes to it, with flourishes which are unique to the English telling. More, he chose to compile the poem in the alliterative style which was to experience a revival in the fourteenth century and reach a particular apogee with the alliterative Morte Arthure and the masterpieces of the Gawain-poet: Sir Gawain and the Green Knight and the dream/vision poem, Pearl.

William seems ahead of the curve, for William of Palerne is one of the earlier examples of the canon and, though perhaps not so sophisticated, is nevertheless a work of literary merit, distinctive metrical rhythm and delightful charm.

The role of Humphrey de Bohun

The sixth Earl of Hereford and a man thought to have been an invalid in later life, Humphrey de Bohun spent most of his later years at Pleshey in Essex. Given his preference for books in languages other than English, the question remains as to why he sought to commission the work and why the alliterative form was chosen. Suggestions vary, although one posits that as a feel-good story of lordly responsibility, the romance was produced to be read to those who lived and worked in Humphrey’s Gloucestershire estates. As an absent landlord living far away, he may have wished to show his concern for his distant feudal lords and tenants; the alliterative style being particularly effective in oral performance. 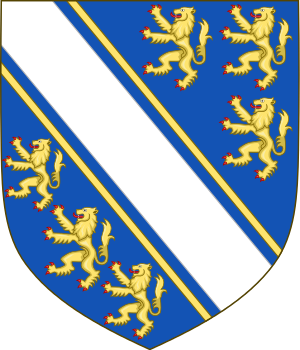 (Above: the arms of Humphrey de Bohun - courtesy Sodacan/Wikipedia)

Certainly, William of Palerne (William and the Werewolf) is a work which deals with issues of concern to mediaeval society under strain, especially following the outbreak of the Black Death in c.1348. Lordly responsibility, social stability, the value of  social justice and the importance of women are keenly observed. It also contains an unusually progressive interest in the lives of serfs and those who lived outside the threshold of a lordly setting.

Scribe William was not writing a work of protest, rather a work of idealism and optimism. This is a work which highlights the need for a balanced and respectful society; it also suggests that Humphrey himself was a man who shared such compassion. In translating an ancient French poem and making it distinctly English, William has also shone a light on the personality of his patron.

Humphrey de Bohun, a great lover of books and literature, might also have been a warm-hearted and considerate lord, who cared for his subjects in difficult times.

P.S. As I write, my translation of this wonderful romance is 36% funded. Please spread the message about this new translation of William of Palerne. I so much want this translation to shine a light again on this much neglected and important work – a work ignored for hundreds of years. Please tell your friends about it and ask them to support it. Scribe William and Sir Humphrey, I’m sure, would both be honoured that we – together – are keeping their memory alive. Be a patron of the book here.

(main image: Miniature of the book’s author, Vincent of Beauvais, within a border containing the arms of Edward IV, to whom this manuscript belonged. Miroir historial, vol. 1 (Vincent of Beauvais, Speculum historiale, trans. into French by Jean de Vignay), Bruges, c. 1478-1480, Royal 14 E. i, vol. 1, f. 3r. In the public domain)