Do you remember The Christians?

Not the God-fearing ones that the Romans fed to lions. I mean the soulful pop combo from Liverpool. Big in the 80s and all that. Some of you are probably too young.

I was never a fan myself, I was too busy listening to Love & Rockets and The Cure at the time, but I was reminded of them recently when I was putting the finishing touches to Weightless Fireworks.

Back in the late 80s or early 90s, when I still read Q magazine every month (is it stil going? haven't read it in years), there was an interview with the band as they finalised the tracklisting of their second album. They had written the names of the songs on to pieces of paper and were moving them around, working out the best running order.

Flash forward more than a quarter of a decade and this was the scene at Pack Mansions. 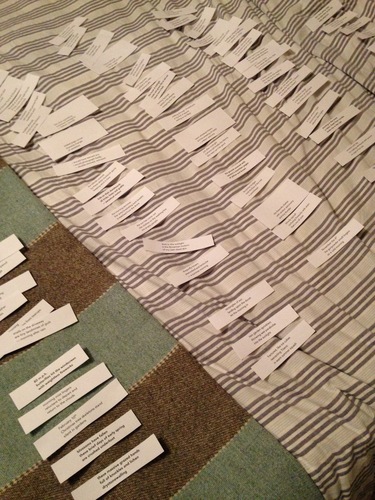 81 haiku laid out on my bed as I scratched my head trying to come up with a sequence that worked.

I started out but grouping them by theme – nature, writing, love, books – but that didn't feel right. Reading lots of poems on the same theme in one chunk was too, well, samey, inviting comparisons that I might not want.

So then I went random. Put them in any order, see what happens. What happened was a loose bunch of poems that didn't feel like a collection. Scrap that. 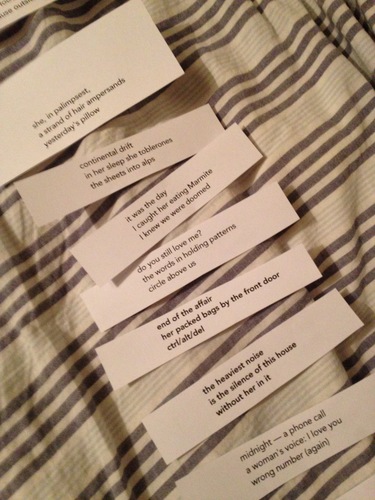 It was a sunny day outside. Spring was attempting to sprung. Many of my haiku are fairly traditional and use the seasons as themes. So I took that as a starting point. All the nature poems were grouped by season, spring to winter. That looked after about half of them, but what about the rest? Well, some mentioned months or times of the year, even if they weren't particularly seasonal in content, so they could be slotted in chronologically, the November poem at the end of autumn and so on. I surveyed the duvet and read through the pieces of paper. There was a vague impression of a logical progression. This was promising.

That left a decent pile with no seasonal connection at all. I picked up each one, read it aloud, and then decided if it felt springy, summery, autumny or wintery. And then I placed it in a suitable position.

And that, my friends, is how I arrived at the tracklisting for Weightless Fireworks. I thank The Christians for all their help. wherever they are.