We Can Be Heroes

The definitive insider history of London clubland in the early 80s 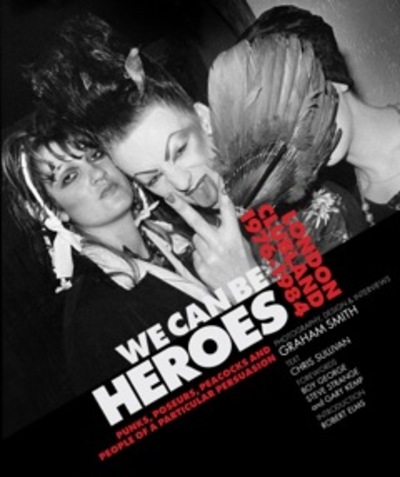 Music | Photography
Rewards for this book are not available.

One of only 50 individually signed, dedicated and numbered copies of the book, presented in a black linen printed box, along with two of Graham's signed limited edition prints (280mm x 235mm)

HOW DID IT START?
The story begins more than thirty years ago. I was 18, having grown up in Edgware at the dull end of the Northern Line. With my cocky ginger school mate Robert Elms, I entered a grotty Soho dive bar named Billy’s. A camp Welsh cossack posed by the entrance as the electronic beats of Kraftwerk pounded from the speakers. Several androgynous couples danced a robotic jive and someone else was wearing an iron as a hat. The look was retro but it definitely felt like tomorrow. So the following week I went back...

Nightclubbing became our life: Billy's, the Blitz, Le Beat Route, the Mud Club, the Dirt Box and the Wag to name but a few. The press initially dubbed us the New Romantics, but we paid no attention. We were too busy enjoying ourselves.

WHY A BOOK?
As a teenager seeing The Clash and The Sex Pistols changed my life. Punks empowering message of 'Get up off your arse and do something creative' struck home. Most picked up guitars; my weapon of choice was a camera. I wanted to photograph bands… so, I did. Then I shot the emerging London clubbing scene that rose from Punk’s ashes.

I’ve had the negatives stashed away in the attic for all these years, the majority never printed, let alone published. Two years ago the old Punk spirit reared its head again as I suddenly had the urge to dust them down and produce this book. ?

The first thing I did was to ask Chris Sullivan, the centre of so much of the action, to write the text. It’s hard to overestimate Chris’s importance to club culture in London. Not only was he the front man of the best and wildest band of the period, Blue Rondo a la Turk, the one-nighters we ran together (he hosted; I played the records) - St Moritz, and Le Kilt - were legendary while his club, Hell, plunged the scene to new depths of depravity. In 1983 he opened the Wag Club in Wardour Street and ran it for the next 18 years: DJ-ing, designing the flyers and interiors, booking the bands and almost killing himself. In Chris’s words: ‘A textbook case of excess in all areas except sleep.’

WHAT'S IN IT?
As well as my 500 photos and Chris’s 30,000 words of text, there's an introduction from Robert Elms, memoirs by Boy George, Gary Kemp and Steve Strange and 500 pithy quotes from more than fifty of the main faces on the scene, plus playlists for each of the clubs. It's a beautifully designed piece of social history told by those that created the scene: an amazing gift for anyone who was there and I hope, an inspiration for those who weren’t.

HOW CAN I BUY A COPY?
We succeeded! The book was fully funded and released just before Christmas (Thank you subscribers!). You can read some of the comments from happy customers here and reviews here And you can still buy the book exclusively from Unbound, either as a limited Special Edition hardback, or as a numbered Deluxe edition, in an elegant box with two signed prints. Just head to the buy button at the top of this page.

One of only 50 individually signed, dedicated and numbered copies of the book, presented in a black linen printed box, along with two of Graham's signed limited edition prints (280mm x 235mm)
View all 2 rewards