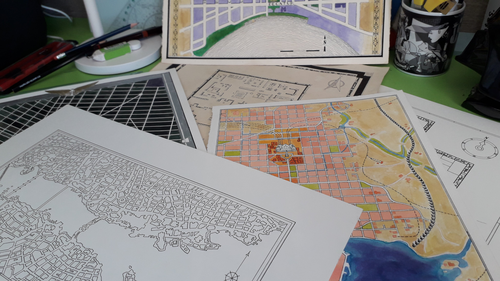 Hello! It's taken longer than expected, but now the last of the city maps, as well as the book's introduction have finally been submitted, and, with this, the first (and greatest) step towards the completion of the actual atlas has been achieved! Virtual Cities is actually, truly happening, and I honestly have to thank you all for the incredible support, and believe that you will all love what we have put together.

Right now, and after two years of writing, sketching, and researching the atlas sits at 65000 words, 111 illustrations and 46 maps. The editing of the text has already began (we are actually entering its second phase), and we will all be going over every bit of artwork, and every map to make sure everything is exactly as it should be.

So, what will now follow will be a period of further editing, refining, and correcting until the text, maps, and illustrations are all finalized. Meanwhile, I will be working on the game design and urbanism articles ebook, while Maria will be busy picking the art for the postcards, art prints, and the map print. After that we will work with Unbound's designers to put it all together in the loveliest way possible, and then Virtual Cities will enter the complex (if not arcane) process of being printed, published, and shipped.

Oh, and here's the book's table of contents (as it currently stands):

The City, Thief: The Dark Project

Lizard Breath, It Came From the Desert

Union City, Beneath A Steel Sky

I will of course keep on updating you regularly, but will also be returning to actually making game & virtual cities myself, as I have been doing for the past few years. Feel free to check out game-cities.com to see what I'm doing when not researching, and writing about the cities other people have created.

Thanks for the update! Cannot wait to have the book in hand.

Thank you for the kind words! Cannot wait myself ;)

One copy of the first edition hardback, plus the ebook.
Buy now
£10
248 pledges

A digital copy of the book.
Buy now