There aren't any children in City 17. The dilapidated playgrounds are devoid of life, and will remain so for as long as the all-encompassing Suppression Field keeps on preventing human procreation. And it's not just the playgrounds that stand abandoned either. Many of the city's buildings are crumbling, and even more have been empty husks for years. Despite the soft daylight and long, almost romantic shadows, City 17 is neither a happy nor a vibrant place. 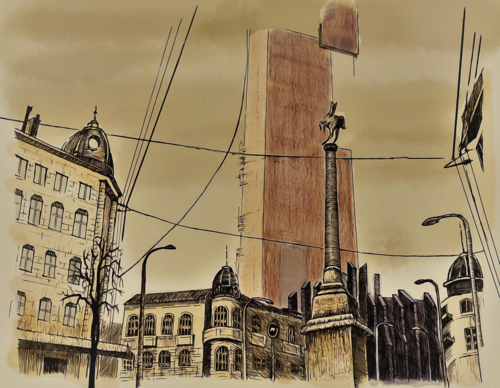 Even pinpointing its exact location is tricky. The direction of the sunlight, and the widespread use of the Cyrillic alphabet suggest Eastern Europe, most probably Bulgaria, yet one can also find a few signs and graffiti in Greek or even Scandinavian. With its exact location remaining a mystery, not much can be known of the place's early history, beside the fact it wasn't always called City 17. The architecture that still stands, itself a monument of better days, allows a simple reconstruction of the city's evolution from the neoclassicism of the 19th Century, to early modernism, to the Soviet functionalism that followed World War 2, to postmodern styles, to a truly alien, cold, and monolithic version of Brutalism.

Following the Seven Hour War, along with the rest of Earth, City 17 is no longer under humanity's control. The unconditional surrender of the unified human government has turned the devastatingly powerful extraterrestrial forces of the Combine into the planet's new absolute rulers. It is they who constructed imposing Citadels in major cities. It is they who chose to erect the greatest of the Citadels in City 17 turning it into their de facto global capital, where Wallace Breen, former head of Black Mesa and Earth's current appointed Administrator, has his headquarters.

The gargantuan Citadel utterly dominates the urban landscape and sits at the new epicentre of City 17. This Combine tower is roughly four times the height of the Empire State Building, known to house the current government's most delicate functions and rumoured to be hiding a portal of pure dark energy. It is of course neither the only alien construct in town, nor the sole centre tasked with controlling civic life. The heavily fortified Overwatch Nexus, probably an old museum or government building, now protects the Suppression Device, and is the most evident hub of Combine military and police activity. 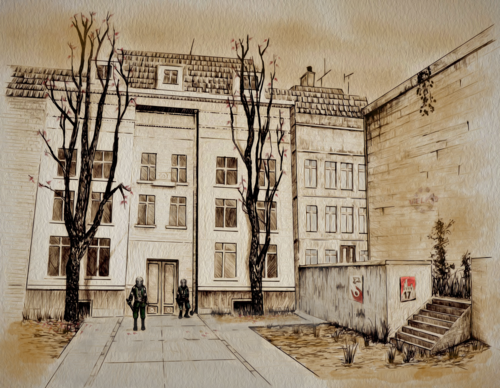 When it comes to spatial organization City 17 adheres to the historically popular but versatile gridiron plan, which is broken up by a select few diagonal avenues, and is currently in the process of re-arranging itself around the Citadel. The bulk of the built environment consists of wall-to-wall buildings organized around courtyards, mid-rise housing units, a relatively rich network of squares, and several specialized districts with the industrial one being the most prominent. Under Combine rule most residential buildings have retained their use, even if the standard of living has plummeted, and the population massively shrunk.

Before the occupation the city must have been able to provide for a decent, even pleasing, life and, among other land uses, sported hospitals, cafés, hotels, restaurants, shops, a once-vibrant harbour, and a service sector fossilized in the now abandoned office buildings. Its industrial outskirts are still linked via rail with the urban core but considered off-limits to citizens. Unsurprisingly, accessing the surviving branches of the city's complex canal system is also looked upon with suspicion.

Not only has most of the town's infrastructure been left to crumble, but massive walls now cut through roads and buildings disrupting the urban fabric for purposes either unknown or defensive. Whole districts have been broken up, and most of the economic and productive activities of the city have been eliminated. At least the power plants are still operational, and, unlike the tramways, most parts of the railroad network did survive, and are connecting the city to the rest of the occupied world. Sections of the road and highways network have also remained functional.

Cities are more than the sum of their buildings, plans, and infrastructure, and are actually defined by the civic life they nurture. Looked at this way City 17 is seemingly all but dead. Desperation looms over its silent squares and roads, and only the words of administrator Breen are echoed through crumbling alleys. There are no fairs nor demonstrating unions here. No drinking holes, no learning hubs, no culture nor leisure.

The vast majority of the few remaining residents have been relocated here; often against their will. Smiles are rare, and furtive looks common. Citizens clad in standard issue uniforms do not remember much, and have to rely on rations of tasteless food handed out by machines to survive. Most keep their distance, speak little, and do not make friends, while the seemingly random abductions by the city's security forces keep everyone suspicious.

The Combine Civil Protection units–the everyday face of oppression–consist of human collaborators wearing riot police masks, enforcing curfews, and manning the countless checkpoints and roadblocks that make traversing the city a dangerous chore. They are aided by an elaborate network of static cameras, flying City Scanners, and menacing Strider synths. As is apt in any system resembling a fascist dictatorship, glimpses of police brutality are a common element of the scenery.

Humanity of course can never be completely subdued, and, despite the overwhelming strength of the oppressor, hope in City 17 refuses to die. It has organized itself, and is utilizing the urban environment to its advantage instead. The Resistance is running its 'Underground Railroad' evacuating refugees via old tunnels and sewers, and hiding its labs and bases within plain sight. The constant sounds of a low intensity war waged against the Combine will never cease until liberation is achieved. 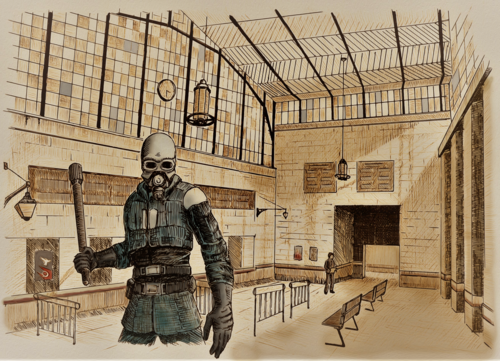 Half-Life 2 was a revolutionary game in many respects. It kicked off the era of downloadable games, and forced the shooter genre out of its hallways and into rich, cohesive urban settings. City 17, an almost perfectly designed virtual place, has since inspired countless artists and designers by feeling huge, mysterious, lived-in, and intriguing, and yet never being wasteful. Little is actually shown of the town as most of it is traversed underground or through buildings and canals, but the illusion of a deteriorating metropolis is palpable. The visible elements are so rich in detail, so thoroughly researched and convincing that they effortlessly imply a believable city, and allude to a complex history.

City 17 is one of the most successful, coherent, economically designed, and memorable urban environments ever crafted. The imposing alien tower, the Citadel, instantly sets the tone, and acts as a major landmark that keeps players both oriented and focused on their goal. Combined with a network of minor landmarks consisting of elements like the station square's obelisk or the horse statue it makes the city easy to mentally map, and thus legible. 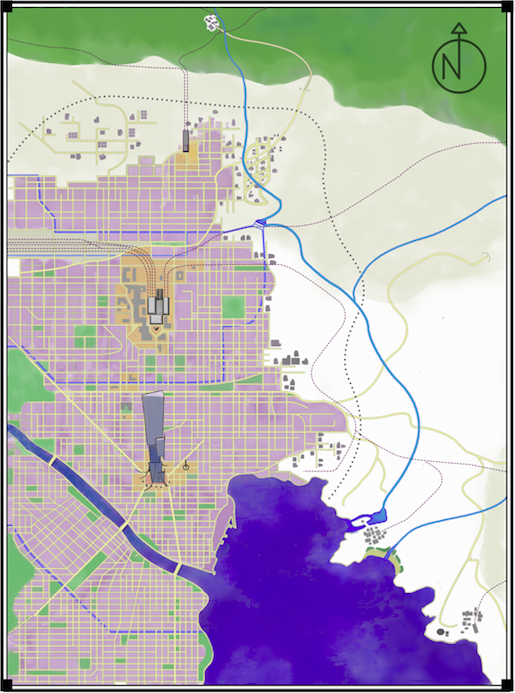 The in-game use of actual urban configurations, along with the obvious existence of a concrete, if rudimentary, city plan further helped things make spatial sense and enhanced immersion. Valve crafted the environments of Half-Life 2 based on thousands of photos from Bulgaria, Russia, Romania, and Serbia, and successfully mixed elements from Sofia, Belgrade, and St. Petersburg, while wisely avoiding the gothic elements that would have muddled its aesthetic clarity. The Overwatch Nexus in particular looks a lot like the Serbian Parliament, whereas the train station bears an uncanny resemblance to Budapest's Western Railway Station.

A living, breathing city also requires a sense of history, and urban history is almost always layered. City 17 has different tech-levels coexisting, and buildings from several ages, regimes, and architectural styles standing next to each other. Crucially, everything placed in its space feels as if it is serving some personal or collective purpose; either for human residents past and present, or for the occupiers.

What's more, the urban layouts and spatial organizations selected brilliantly serve the game's need for interesting battlegrounds. City 17's courtyards, canals, and streets provide ample tactical opportunities and varied arenas able to support entertaining encounters against a variety of enemies. As a final touch the plot explains away the need for too many 2004-tech taxing citizens, and credibly restricts available routes, being itself part of a masterful design.

One copy of the first edition hardback, plus the ebook.
Buy now
£10
234 pledges

A digital copy of the book.
Buy now
View all 14 rewards