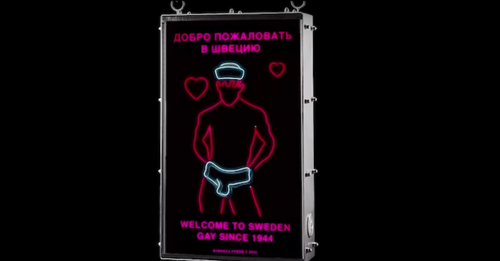 You couldn't make it up. And, of course, I didn't. Much better to leave it to real life, as reported by the Moscow Times

"A Swedish peace group has devised a unique way of fending off unwanted naval intrusions after reports of Russian submarines entering the country's territorial waters last year — erecting a device that taps out in Morse code: 'This way if you are gay.'" reports the MT.

For the full article, click here. And, of course, massive plaudits for the deadpan use of the phrase "erecting a device"...

Anyway, it all brings to mind one of my favourite passages in Version Thirteen. Medulev, a dangerous slave to the dark mistress he secretly loves, finds that it's all getting a little difficult to control...

MEDULEV SAT ON the edge of a 1960s cocoon chair and cursed. You couldn’t sleep in the fuckers, you couldn’t relax in them, you couldn’t work in them. Why on earth Anna Barinova paid any attention to the various faggot designers she patronised, he’d no idea.

Still, this was among his favourite ABTV investments. A little stake in Sports Universe on the Novy Arbat was a money-maker, and a useful foothold into a wider world. Medulev sat on his intensely irritating and impractical perch and smoked pensively before an array of security screens.

All the good things in life were there: compulsive gamblers shovelling coin into slot machines or pissing away fortunes on the roulette and blackjack tables, while drinking overpriced, watered-down cocktails. Overweight businessmen lay down in velvet-draped ‘privacy’ (did they really think they weren’t being filmed, the dumb fucks?) as harridans from Uzbek and the Steppes ground their crotches a centimetre above faces taut with the agony of lust; the punters knew they’d get beaten to crap if they so much as laid a finger on the girls without paying an extra 10,000 roubles. On the top left of the screen bank, the footage of the VIP rooms played out. An industrialist with a penchant for Asian and Philippina hookers, two at a time, was getting himself blown and blindfolded at the same time – which seemed to Medulev to defeat the object somewhat. But what did he know about what made people happy? The only woman he might ever love had no interest in him, only money, so far as he could see. The Black Widow, indeed…

In another suite, a screen portrayed Admiral Borzov. Again? Medulev looked at Borzov’s huge, flabby white back, thickly covered in dark hair. The admiral was trussed up in a pair of tight leather crotchless underpants that cut cruelly into his walrus hips.  Medulev inhaled meditatively as he watched Borzov’s sweaty bald head bob up and down energetically. The admiral was kneeling in front of a large, black male prostitute. Paulie, known as Mr Hollywood to his clients, was American, and very popular with male and female punters, apparently. Two small mysteries presented themselves to Medulev. Why did Admiral Borzov love to suck black cock so much (he always choose black trade)? And how could the stud get it up when confronted with the overpowering ghastliness of Borzov in his obscenely tight thong? You had to hand it to the hooker, he was a real pro…

The best thing of all about being an investor was access to this private room, where he could smoke as much as he liked. Moscow was too fucking cold to smoke outside, whatever the tobacco fascists said. In fact, as he stubbed out his last smoke, he decided to have another, straight away. Just because he could.

The screen at the top right showed indistinct, inky blurs. This was the readout from one of ABTVs commercial satellites. The signal wasn’t that great, and the image of the terrain beneath the satellite would need the kind of expensive visual enhancement you only got in high-level defence projects. So he switched to graphic representation of what the satellite was tracking. A dozen or so different-coloured lines swam across the screen, some of them offered a little digital burp. And the one Medulev didn’t want to see was trilling away in green. Fuck! What was the point of all this stuff, this serious business, if other people couldn’t be relied on to do the most simple things?

His phone flicked into life.

Medulev panned reflexively across the bank of screens. Borzov, mission accomplished, was prostrate on the floor, sobbing.

Phone to his ear, Medulev looked on in distaste. It was Madame Borzova he felt sorry for. Her husband obviously wasn’t throwing much of a fuck into her, and it was rumoured he liked to give her the occasional slap. Certainly, he was known for his brutality amongst the men in his command. Still, it all paid, and it paid cash.

Medulev heard out his interlocutor with some concern.

“No, no doubt. Kamchatka. Coming though loud and clear. Version Thirteen still exists. What do you want me to do about it?”

Another ten-second burst from the other end.

“But isn’t that why you picked Kamchatka?”

This got a shorter, sharper retort.

Medulev grunted assent, and switched his phone off. He’d realised the stakes were high, but he hadn’t reckoned on starting a fucking war.

He reached for another cigarette. As he lit it, his hands were trembling.