I don't generally feel the need to adopt podium language. So usually, I don't. But I really am thrilled and I really am humbled that one of Version Thirteen's supporters decided to buy the right to name a minor character in the next Spendlove novel. As long as it's not Bill Clinton or Mother Theresa, I'm sure I'll be able to make it work without throwing readers out of the tale.

And so it is with minor trepidation for Version Thirteen's narrative drive that I point you in the direction of the cameo apearance of Admiral Spavinski mid-way through Part Three of the novel. Spavinski enters the action as a corrupt member of the Russian top brass. Our hero, Spendlove, is on a submarine in the Baring Straits, between Alaska and the Russian military peninsula of Kamchatka. Spendlove has memorised the plans for Version Thirteen - a gizmo that acts like Kryptonite around the multi-billion dollar conventional military technology of supercavitating torpedoes and submarines. The contents of Spendlove's brain would destroy this industry. So quite a lot of people want to destroy that information - and by necessary implication, Samuel Spendlove.

We find Spavinski in the compnay of a criminal henchman, Medulev, in the security centre of a seedy Moscow night club. The task in hand is to launch not-so-friendly fire on Spendlove, even though he's in a Russian craft. It's a pretty bold ploy, as all this must take place under the close surveillance of the American forces just across the water. 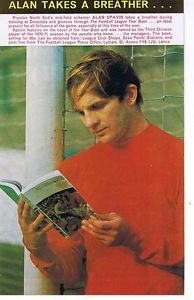 And why Spavinski? In promoting a previous book, one reader - a fellow fan of the mighty Preston North End - chose to have a character in the next named for Alan Spavin (a quiet genius of the North End midfield back in the 1960s and 70s).

MEDULEV HAD A flunky from Sports Universe bring up a couple of canvas chairs to the control room. He and Spavinski sat in them while Borzov was exiled to the cocoon chair, which soon swallowed him up. He lay back, blinking impotently, like an oversize mole trapped in an onion bag.

Medulev pointed at the screen at the top right corner of the bank.

Spavinski was a thick-set rear admiral with oblong-lensed spectacles that lent him an owlish demeanour. But he was a warrior. He’d seen action – in war and in black operations. Medulev, as an Afghani vet, respected that. You weren’t a man till you had blood on your hands. He glanced briefly and contemptuously at Borzov, the overgrown baby in the cocoon chair.

“Comrade, is it secure?” asked Spavinski.

“Nothing is secure. But I represent the owners. What can I say? Careless talk will cost lives.” Medulev directed the last remark at the room generally. There might be some idiots listening in. These places were riddled with covert surveillance devices. A generalised death threat could only help. Medulev turned towards Spavinski and made an encouraging gesture. Comrade – he liked that. Old school.

Spavinski took out a walkie-talkie.

“Old-fashioned, but encrypted,” he explained. “Just so long as no-one’s bugging this room.”

“If they are, they’re fucking dead!” snarled Medulev. “Let’s get some friendly fire going, shall we?”

“All done at this end,” Borzov called out. “Can’t compromise the golden goose, can we?” he chortled.

“Obviously not,” said Medulev. He wondered how much these two made out of all this. Probably much more than he did, and he did his fucking job properly - and only blew a bit of it on hookers and drugs.

The three of them settled to watch what might have been a very boring screen-saver program from the 1980s. It was a simple encrypted patch-through from a naval administration facility in a western suburb. Borzov would regularly monitor routine manoeuvres from home or wherever he happened to be, via an encrypted connection.

What came through on the screen looked to Medulev maybe more like a bad piece of internet gaming – Tetris without the nice graphics. The fact that hundreds of billions of dollars and the lives of several human beings – many of them his brother warriors – were at stake, however, certainly commanded Medulev’s attention. That, and the fact that if the Americans took it the wrong way, they might be starting World War III.

Medulev reached for a light, and settled to watch a series of increasingly angry bleeping dots begin to converge on each other. The nearest land mass was some godforsaken place called Garaginsky Island. He sat back, and tried to relax, hoping he wasn’t witnessing the beginning of the end of the world.

Without doubt Admiral Spavinski will carve a perfect path through the defence lines to achieve their perfect goal.