It's out there now. Versailles is whatever people want it to be. People are reading the book, they've been messaging me and calling me, telling me what they think and it's such a good feeling because now it's not really up to me anymore. The novel is its own thing, its own beast, a monitor lizard escaped from the cage and making its way out into the world, beyond the gates.

Foyles bookshop on Charing Cross Road in London are making it a staff pick, they've put it front of house and in their highlights section, as have Waterstones Piccadilly and others. I've already got some champions out there, enthusiastic about Versailles, and I'm delighted, it's what the past ten years or more has been all about for me.

The way things are now with bookselling it's never been more incumbent on authors to go out there and talk to people about the book, convince people it's worth reading. So that's what I've been doing, tubing and bussing and walking all over the place and asking people to read, and if they like what they read, to become a kind of ambassador. God this all sounds so over the top but anyway, that's what I've been doing.

I handed the book to someone at Foyles over a month ago and she loved it, and now she's writing one of those reviews that goes under the book on the shelf. Invaluable stuff.

It's early days but I have this strong feeling the book will gain its own momentum through word of mouth. I know I've said it before but I'd be so grateful if – when you've read the book – you would take a moment to write just a few lines about it on the amazon page (https://www.amazon.co.uk/Versailles-novel-Yannick-Hill/dp/1783522305). It makes such a big difference.

Thanks again to all of you for your support, we've produced a beautiful book, it looks like something that belongs in the library of an interstellar spacecraft. 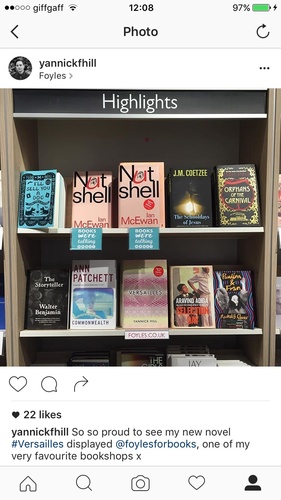