How I write novels #1: Photography

So one of the ways I start writing is by getting hold of a book of fine art photography, it has to be pictures of people. It doesn’t matter if the photographs are set up or documentary, as long as the pictures are of human beings, I’m gold. There’s something about this form. A captured moment. The artist Wolfgang Tillmans says he doesn’t make a distinction between a photograph that is set up and one that isn’t in terms of the truth it captures. The person being photographed is still in that moment, whether or not that moment was prompted. I like that idea because that’s what it feels like when you make up a character and they come alive for you and start doing their own thing.

When I’m embarking on writing a work of fiction I don’t want to do it without these kind of waypoints of truth (stay with me). What I mean is I don’t like the feeling of making up a story completely from scratch, without referencing reality in some way. It’s why I get a lot of my ideas for my fiction from stories in the news or true crime books or documentaries. But there’s something about figurative photography: a person in an environment wearing their clothes (or not), with an expression on their face (actually that’s not necessary either, they might be turned from the camera and it’s just as interesting), doing something (or not).

I look at that image and start using my imagination.

I take that moment and built a story around it, or rather a new reality. It’s like tying one end of a long piece of string to something and then entering a dark cave system. I’ll always find my way back. And writing fiction is all about being able to find your way back, to remember what made you want to tell your story in the first place. 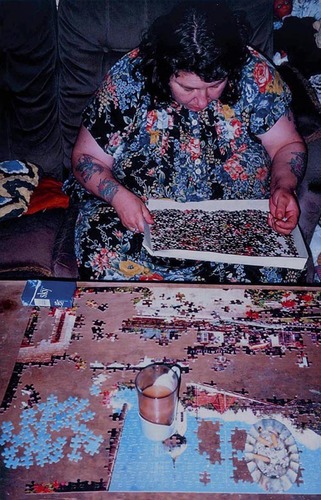