Watch out world – Unladylike is coming

We did it! I woke up on Friday and noticed that, without ceremony or fanfares, my crowd funding target of £4000 had been reached. I was home alone, though there was a prophetic moment as my cat came in and 'Dancing on My Own' by Robyn played on the radio.

I want to emphasise that each and every person who has helped me on this journey – even those who have encouraged me without pledging – has made it possible for me to achieve something I never thought possible. An actual book, written by an actual unknown indie wrestler, which uses the actual word feminism. So thank you.

There has been some difficult journies on this road. There was of course the whole cancer thing which puts a dampener on, well, the future. During recovery I was determined to spend two months off work working on my book – instead I spent most of it unable to sit up. Though I did complete Skyrim.

I also followed up my surgery with a fundraiser film screening of a selection of films on gender and wrestling, the headline being the fabulous 'Signature Move' (2017) – a queer rom-com about two female wrestlers. The event was joyous, though only 25 people made it in the end, this was no problem because we could all fit in the ring like a big, wrestling sleep over. 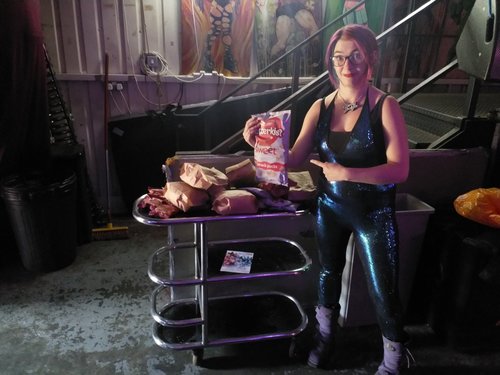 Me at the film screening of Signature Move. Highlights included me wearing a yglittery jump suit and giving out more popcorn than 25 people could eat. Pic by Emily Miller.

In September I managed to get back in to the ring. Babe Cthulu (Cyndi Lauper with tenatacles) took out Hannah Lawless at the most recent Burning Hearts show with a furocious, expertly executed, nose grab. Take it from me, it's no easy task coming back from 9 months out of the ring, even doing forward rolls has made my head spin. I had the privelidge of training with the babely Ophidian and Hollidead back at the good ol' LSLL. Three months after surgery I was able to hold soemone's body weight on my legs (dirty dancing style) and then jump from the floor on to someone's shoulders. I did go home in tears because I was worried I was never going to be fully recovered. As I said, coming back training is hard, the pressure is doubled in just getting the ring rust off. Plus you have to remind your body how painful wrestling is. 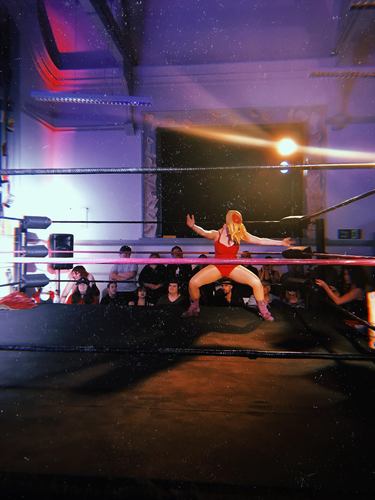 One of the worrying things that wresdtlers do is always strive for the next match, the next bigger stage, the next set of gear. We are never happy with what we have achieved. But the funding of this book has meant I can reflect on the love and support of my partner, family, friends and a stupidly large number of strangers both in and out of the wrestling community. Unladylike, a Grrls guide to wrestling, is going to be a real-life book. And that's what must be what is central to the book – the importance of valuing every achievment, even if it's chucking yourself around a ring in a leotard.

This idea of community is something else so vital to the journey of this book – it reflects how people strive for something outside of the 9 to 5. It could be drag, it could be story telling, it could be Dungeons and Dragons. But we shine when we invest in these activities that are contingent, fleeting, physical - in a world that is focused on Brexit and meeting KPIs. For wrestlers, it doesn't matter about the belts, or the fame, or rippling muscles – if you are doing something you love, there are no winners or losers. It's all just a question of framing a win or loss in to a story. Like life, really. 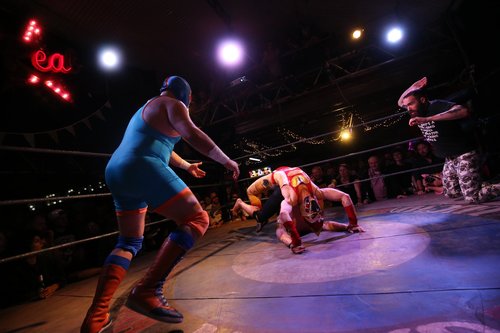 Standard Friday at Lucha Britannia. Ophidian the Cobra King pins Pava Real as Hombre del Rocka runs in. No, I don't really understand how his body is doing that either. Pic by Roger Alarcon

So what happens now? Well, I need to begin the final edit of my book and make it ready to be sent to a copy editor. Then there will be another edit after that, and then probably another one. My grammar is atrocious, my main skills being subversive wrestling, Cher-based comedy and Excel (dream big, it is possible to be good at Excel). I will keep you updated as things move along, but in the mean times you can support Unladylike and the glorious world of indie wrestling in the following ways:

This book would not exist, and indeed there would be nothing on its pages, if it wasn't for the lovely, underground,bad-ass wrestling promotions I am involved with, but we can't continue to exist without new audience members. Come down to the Resistance Gallery - the home of masked luchadores, Lucha Brittannia; humanist girl gang, Pro Wrestling Eve; and enormous joy-fest, the London Lucha League. Out and about are also the hard-femme co-operative Burning Hearts, and in Brighton the lovely Riptide wrassle promotion (recently featuring Dave Benson Phillips). Hopefully you can witness my return to form, either as a disgusting frog woman or an adorable squid at a show near you.

I am going to be doing a lot of excerts and magazine coverage ahead of my publishing date, and will continue to write articles about wrestling where appropriate. I have a blog on the Huffington Post, and you can follow me on twitter and instagram as @ranabitesback.

Last week the lovely Grapevine zine featured a sample of my work which can be found here – and in the next couple of weeks I'll even be in bloody Vice. And in 2019 I'll be part of a group of anthropologists producing a volume about wrestling and populism. Well now, isn't that nice?

3. Continue to help me raise money for my book

At this stage most of you have bought yourself a electronic copy of the book, for just a fiver you can log in online and upgrade this to a hard copy. Also others can continue to pledge and use the Unbound site to pre-order their book.
Just an FYI – after the first 100% of funding, I get half of whatever capital is raised through Unbound orders so please encourage people to support me <3

At some point next year, you will get an email to say the book is ready, and then i'll tell you a bit more about this stuff but for now, please help me celebrate this acheivemnt.

Please continue to have adventures and remember the importance of being Unladylike.

Hi, Heather. Delighted that you've hit your target; I received the email this morning. An obvious question - what about Glastonbury? Has wrestling been done there already? If not, why not? Didn't get tickets for next year so we're off to Benicassim instead. will keep an eye out for any aspiring El Santos while we're there. Rgds., Mark