Thank you to everyone who has supported Unladylike so far. In just a few weeks I've already been able to raise a quarter of my target just due to the sheer astonishment that a book is being released with feminism and wrestling in the title. There's been a lovely mix of brand new and existing wrestling fans getting invested in the project and it warms my little heart muscles.

On the 14th of June I also held the first and last ever Woodland Wrestling League tournament which saw a blood feud between the good and evil animals of the forest (aka. Some of my very kind friends, who are legitimately talented wrestlers, put on some animal masks I lovingly stuck together on my evenings off and did a stellar job). Highlights included a stag beetle body slamming a crow; and two squirrels using every feasible way of injuring each other with nuts. The event raised a lovely chunk of capital – keep your peepers out for more fundraising events soon. Here's a picture of Grey 'the Cracker' Nuts, an squirrel driven to madness by eating only fag buts he fings in Mile End Park. Don't try try googling it as will you find out (as I did) that an actual Woodland Wrestling League exists in America entirely starring pubescent boys in head protectors. 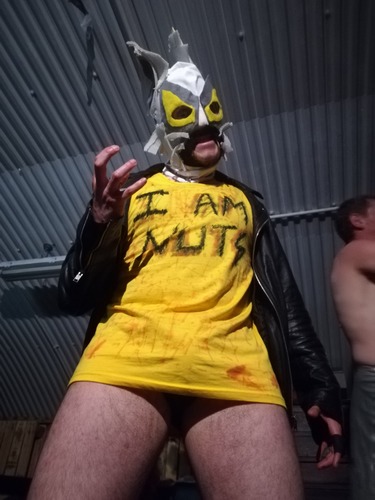 I am calling this year the Summer of Spandex, as it's a very exciting time for hard-femme wrestling. In the ring, the WWE are bringing back the Mae Young classic (all female tournament) showing that women's wrestling has become a sustainable way of raising the overall profile of the industry. Also, season two of GLOW airs on Netflix – reviews are already tipping it as dealing directly with sexual harassment and racism within the 'golden age' of wrestling. I'm very pleased they will be addressing these issues alongside an excellent soundtrack and a lot of on point lycra. Keep your eyes peeled for my accompanying blog for the Huffington Post. 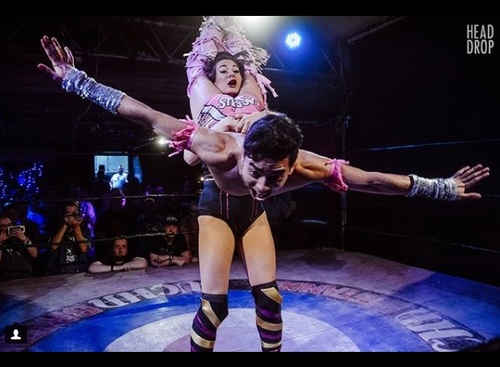 Meanwhile in the underground London scene, my sweaty home, The Resistance Gallery @ResGal, is currently going through an exciting period of change. A bit like forming it's own chrysalis out of used gaffa tape and ring gear it has a new army of followers decking its murky and much loved walls. Only a few years ago the place was struggling to stay open under the waves of gentrification encroaching our beloved railway arch. But after some lovely examples of cross-company working there are now wrestling events on literally every weekend. @ProWrestlingEVE is leading an influx of female, queer and nb wrestlers in to wrestling, through femme-only classes and accesable events. The London School of Lucha Libre @LSLL is literally busting at the seams with new recruits and it's a wonderful thing to see, particularly as many of them are as bright-eyed and clueless as I was when I first stepped in the ring. One girl admitted to not knowing who the Undertaker was, much like proto Heather, and I literally held her like my own child. If you want to support this project even further – come down to an event, because the industry is nothing without it's crowd.

Writing-wise I am slavishly hiding from the sun (you're welcome) and continuing to complete a full draft of the book from three years worth of brain dumps and pub-based interviews. Finding a seamless transition between discussing the existential benefits of being a heel and the story about how I broke both my big toes at once is proving to be all the right kinds of challenging.

So, please continue to follow the exploits of myself and the crazy feminist wrestling world on twitter or otherwise. And of course, please encourage your friends to invest in Unladylike.