Oh hi first draft manuscript, nice of you to finally get here

Since I last updated y'all I've been incredibly busy finalising my first draft of Unladylike. This has meant that I've delayed my return to the wrestling ring to avoid concussions. I replaced this time with drinking wine and staring at my book until I detested it – a tried and tested form of self-editing.

Thankfully, since October I have been massively helped by Rosanna, pictured below enjoying a premium ice cream. Rosanna and I met working in the database team of Girlguiding and formed a firm friendship on feminism, books and reduced food at supermarkets. She has been kind enough to read every single chapter and sort out my horrible grammar, despite working full time and knowing very little about wrestling. Her help has been invaluable. 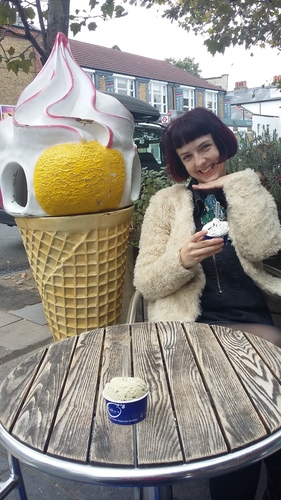 I have also spent a large chunk of time creating an appendix of wrestling terminology as I am determined to make this book as accessable as possible for those who are new to wrestling. This includes a glossary of terms; a short 'herstory' of female wrestling; and about 50 illustrations of wrestling moves (pictured). Rosanna has also helped with this because though I've had some kind offers from wrestling fans to give the book a once over – it has been more useful to have someone point out where I rely on assumed knowledge, for example, most people don't know who Rick Flair is.

Rick 'the Nature Boy' Flair is a wrestler from the 80s who still staggers about the WWE, best known for whistling, strutting, cheating, having a weird shaped torso, strikingly yellow hair, and being delightfully hateable. He also has a daughter, Charlotte Flair, who was pre-destined to rule the wrestling world and has very strong cape game. 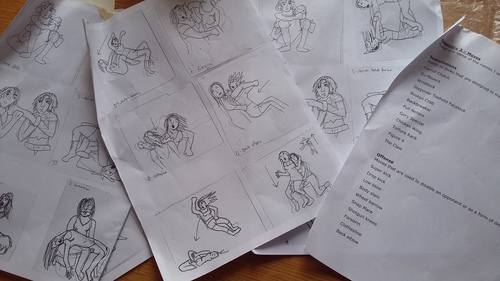 Thanks to Rosanna, and the ongoing patience of my partner, Fraser, who has spent approximately two months playing SimCity while I sit frowing at my laptop every night - on the 10th of December I pressed the send button on my first manuscript of Unladylike, a Grrls Guide to Wrestling.

Unbound have now introduced me to my lovely Editor, Sue, who will review my first manuscript so that I can begin the whole process again. That is, staring at my manuscript and considering every small detail until my face hurts.

I have faced a lot of personal barriers this year – a bit of cancer, a job change, being unable to wrestle for health reasons out of my control, which has been incredibly hard. But as I finished the last chapter of my book, I realised that the point of writing all this down is for it to be a celebration of overcoming adversity to do something that, despite being incredibly weird, brings you utter joy.

So I am delighted to tell you that the publication date for Unladylike is set for July 2019. Sorry to everyone who my Dad told it would be an ideal Christmas present this year – thanks for trying though, Rolf.

Please, please encourage people to pre-order the book through the Unbound funding page – now I have reached my crowdfunding total I receive money from these sales. Their patronage will keep me in my chosen luxury items – lycra, wine and the possibility of one day owning a shack to call my own.

I wish you all a happy and healthy new year. In 2019 I thoroughly recommend taking up a new past-time that pushes you in every direction. Wrestling, is the obvious choice, but I can also recommend Dungeons and Dragons.

Heather you are AWESOME
Well done you!
Much love
Lady Helena Vortex

Congratulations on completing the draft! Randomly, got to see you perform at the Muppet's Christmas carol sing-a-long, was super fun. Really looking forward to the final book, the illustrated moves section is a great idea.

Well done, Heather Durability & all that. Merry Christmas to you & yours - looking forward to reading the book. Best, Mark

So proud of you Heather, you are one determined lady! Mum and Steve x