Hello beautiful supporters of Unaldylike. I hope that you've not all melted in to the suburban pavements of heat-wave Britain.

First off – an enormous thank you. With your help I've passed my second funding milestone of two thousand pounds. It's overwhelming to have been able to reach this target with the help of people who want to support something as niche, yet important, as angry ladies within wrestling.

For any of you who've bought the book, I would like to offer a discount for my event on the 2nd of September at the Resistance Gallery: 'Unladylike: A Triple Bill of Films on Gender and Wrestling'. You and a friend can come to the event for half price – that's 3 excellent films, popcorn, daytime drinking and top bants for only a fiver. What a treat. All the information is here. 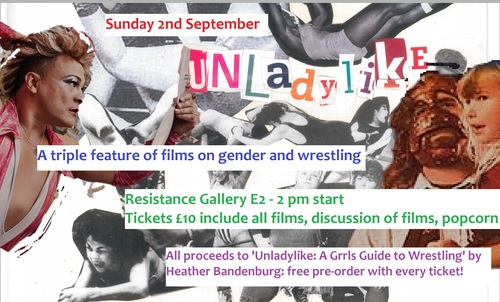 My triple feature fundraiser will screen 'Beyond the Mat', 'Cassandro, el exotico' and 'Lipstick and Dynamite'

I've also been doing a lot more freelance writing on wrestling and feminism, to the extent I've been bought on as a blogger for Huffington Post. >What was originally an attempt to make people more aware of my book has now become a place to talk about vital subjects, such as the return of World of Sport wrestling to UK screens; and why feminist killjoys have saved the WWE, despite being mortal enemies. A lot of my writing has been lifted directly from Unladylike, so please share and ask any like minded friends, relatives, or pets, to puchase their copy now.

There's plenty to get excited about in my weird little community of angry, queer, punk wrestling promotions. Lucha Britannia and the London School of Lucha Libre, my grapple family, continue to grow in number and talent – we even have membership cards now! Pro Wrestling Eve has about a million events happening in August and September, including a quiet Thursday night with four of the best female wrestlers in the world competing, Kay Lee Ray, Killer Kelly, Viper, Toni Storm: I could go on. And proto-dojo and BFF collective, Burning Hearts, return to an Old Library on the 15th of September for another show. We also had a night out with CLAW, the Confederation of Lady Arm Wrestlers, and now want to bring shark outfits, drag kings and card magic in to our shows. 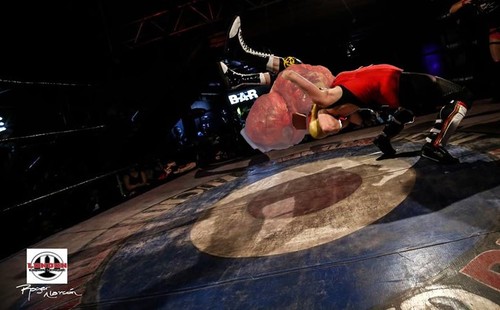 In my last update I mentioned I was toddling off to have major surgery, which wasn't ideally timed considering I have to try and raise four grand by Septementer. On the 7th July I bought a 6lb ovarian cyst in to the world, Cystopher Columbus: pictured below during a match. Throughout this time however I've contributed to an academic text with some excellent anthropologists; joined Huffpost and Instagram (no idea, really); and remotely directed a Latitude festival special of I Need to Cher. I am continuing to live by the resillience that Unladylike celebrates, however recovery has been slowed as I danced too vigorously Lady Marmalade at a wedding on Saturday, which is definitely not reccomended when you've had abdominal surgery.

Now I am not only back on my writing, but also two dress sizes smaller and even more determined to meet my funding goal. So please, if you haven't already, get your pals to grab a copy of Unladylike or pop down to my screening fundraiser on the 2nd of September. I hope you continue to not melt in to the pavement and if you see me pottering about at a wrestling event, do come say hello.