Underdogs 2- now with *exclusive* bonus content (and a discount)!

Hi everyone- a few updates about the next part in the Underdogs series. I'll keep it as brief as possible.

1) The 90-day crowdfunding period for Underdogs: Tooth and Nail (otherwise known as Underdogs 2) ends on Saturday. At time of writing, it's knocking on the door of 80%, and might actually make it on time! (Here's the link, by the way.)

2) With that said- Unbound have kindly reassured me that, even if Underdogs 2 doesn't quite reach the necessary number of pre-orders in time, an extension is on offer. (I mean, let's give the sequel some credit- half of its supporters haven't had time to read the original yet and it's still nearly at its target! If it weren't for the sequel's higher budget it would be there already.)

3) So you may be wondering... if the extension is available, what's so special about Saturday's deadline? Well, two things actually. Number one, there's a 10% discount for Underdogs 2 between now and Saturday night- just enter the code "UNDERDOGS10" at the checkout. And number two... you know that exclusive bonus content I mentioned? Read on.

4) "Tales of the Underdogs" is a series of short stories within the Underdogs universe I've been planning, where each character has their own story detailing a life-changing experience. I suspect most of these stories will stay private (at least until the series ends)... but as a thank you to everyone who brings Underdogs 2 to life, I'll be giving you access to TWO of these short stories! On Saturday I'll release Ewan's story - which covers his first day at Oakenfold Special School - and not long after I'll release the second one. And who will it feature? You get to decide that- vote here for which characters you'd be interested in hearing from!

So it's getting exciting now! On Saturday, everyone who has supported Underdogs: Tooth and Nail (whether this week or on Day One or anywhere in between), will get exclusive, private new content as a thank you for your support. I'm really, really looking forward to writing short stories again, and I hope you love reading more into the Underdogs universe when the stories come.

Again, there's only five days left of the original 90-day deadline, and five days left of that discount I mentioned. Now is definitely the best time to pre-order if you're planning to, so here's the link to where you can help bring the Underdogs back to the page! 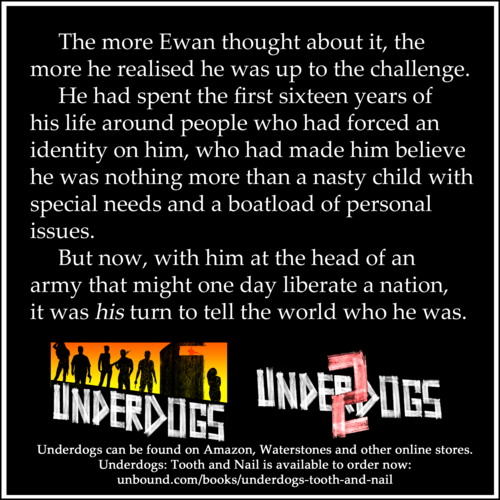