The four best ways to support the Underdogs series

To those who have already read Underdogs, I hope you loved it - and for those who are still reading or yet to read it, I hope you'll enjoy the journey! With the novel selling brilliantly (but the sequel's own campaign progressing very slowly), I thought I'd answer a frequently asked question. People ask me this a surprising amount:

What is the best thing I can do to support a new author and their novel?

Well, I can think of four things.

1) The obvious one- buy their novel.

Yep, no need to back this one up because it's fairly self-explanatory. (Besides, everyone reading this pre-ordered Underdogs before it even came out, so I'm fully aware that I'm preaching to the choir. And once again, thanks a lot for doing so! If you want to do the same thing again for the sequel and speed its coming, here's where you can do that too.)

When I had my first face-to-face meeting about Underdogs (in a pub in Oxford- it was brilliant), I remember the Head of Digital telling me that "the most powerful thing anyone can do for an author besides buying the book is to write a review of it. Especially on Amazon, because those reviews carry a lot of weight."

At time of writing, Underdogs has a 4.9 star rating on Amazon.co.uk (14 five-stars and 1 four-star), a 5.0-star rating on Amazon.com (9 five-stars), and - rather incredibly - a 4.15-star rating on Goodreads where standards are so high that novels rarely get a four-star average or higher. So it's doing rather well, and it's been so encouraging to watch. For those who want to add to those numbers though (I actually don't mind whether your review affects the average positively or negatively), those are the best places to go.

3) Keep involved with the series.

I talk a lot about Underdogs' Facebook page, and always encourage people to go there to stay updated (and also have discussions about favourite characters, scenes, etc.) If you're not already a part of it, feel free to join. At time of writing the page has 994 likes and 1,035 followers, so you might even be "like" #1000!

With that said, Facebook is notorious for picking and choosing who gets to see posts. These days the good old mailing list is the most reliable way of keeping informed, without having to rely on someone else's algorithms deeming you worthy. So here's the Underdogs mailing list, for (very) occasional important updates.

I imagine some authors get annoyed when readers lend their books to others instead of asking them to buy it themselves. I don't - to this day I'm hugely grateful to my brother-in-law for lending me a copy of The Hunger Games, because I proceeded to read it in one go and bought the whole trilogy straight afterwards. Authors should be grateful for lending for the same reason we're grateful for libraries (public or school-based). Five-star reviews on Amazon are useful, but the word of a friend is often powerful too.

So if you have a friend or family member you think would love Underdogs, tell them. If you think your library or your school would want a copy, tell them about it. If you know someone who's already read it (and actually liked it), tell them how urgently the sequel needs funding.

So that's it from me, and thanks once again to all of you: whether you've written reviews or not, joined the Facebook group or mailing list or not, you all brought Underdogs to life and I'm forever grateful. Once again, here's the link where you can pre-order the sequel and help the series progress, and I'll leave you with a nice McCormick quote because I like it. 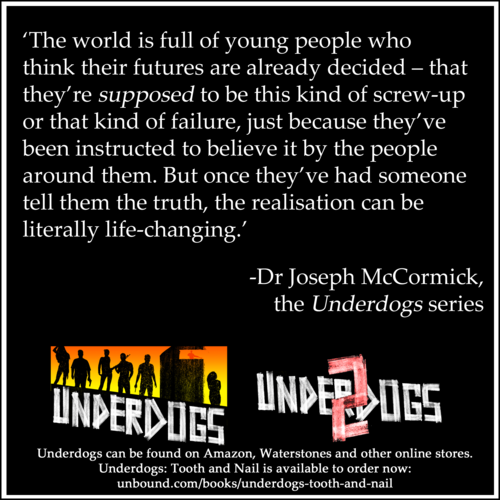