Links to bonus content (oh, and Underdogs 2 is nearly there...)

Hi everyone, just a quick one this time.

For those who haven't yet read the exclusive bonus content as a thank you for pre-ordering Underdogs: Tooth and Nail (otherwise known as Underdogs 2), here are the links to where you can find them- just click on the titles and you'll be straight there.

Ewan West Goes To Oakenfold - the story of Ewan's first day at his last chance saloon, following his exclusion from six mainstream schools. The story also features a few other familiar Underdog faces, as well as appearances from Ewan's oft-mentioned parents.

Jack Hopper Talks To Dad - a rather intense one-scene story, about the time Jack had a conversation with his father following his first suicide attempt. As painful as it was to write (largely because I love Jack so much), it had a nicer ending than I thought it would.

For those who click the links but can't see the story, it presumably means you haven't pre-ordered Underdogs 2 yet. No worries- out of the original novel's near-600 backers, there are just over 300 who haven't pre-ordered the sequel yet (presumably still reading it- the sequel came out fast!). But this is where to go to get yourself a copy, and since it's on 93% now, we only need another 30ish copies to be pre-ordered - less than a tenth of the people reading this - and then production can begin. 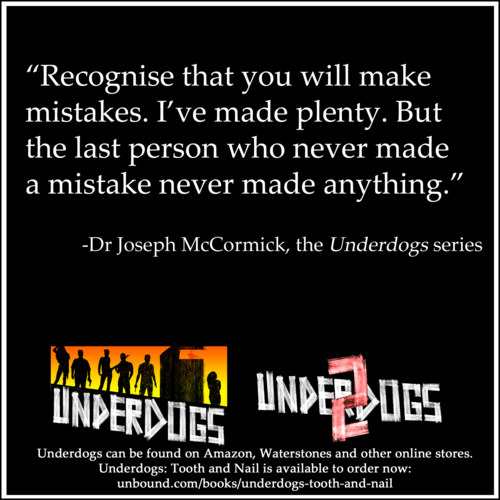